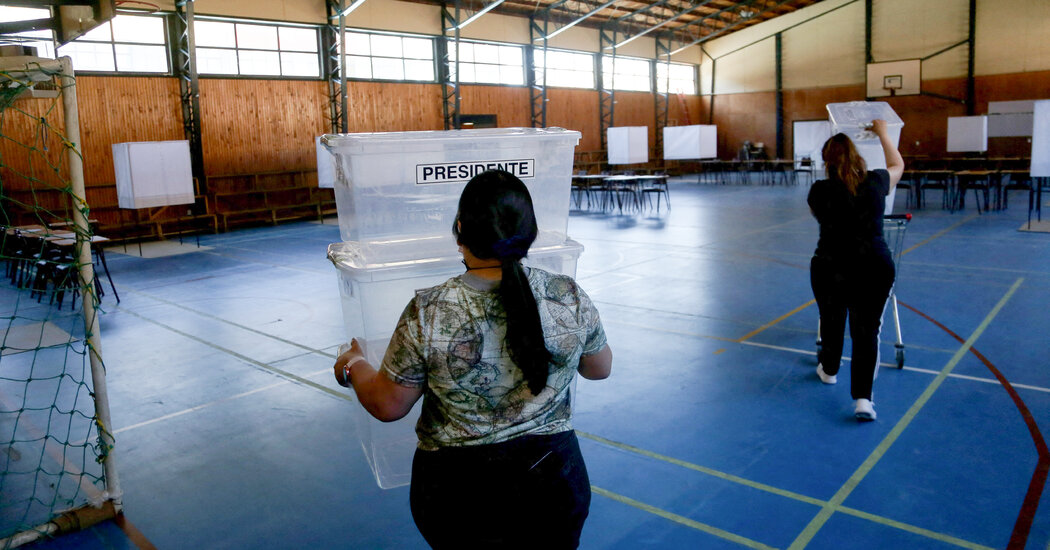 SANTIAGO, Chile — Chileans faced a stark choice between left and right on Sunday as they began voting in a presidential election that has the potential to make or break the effort to draft a new constitution.

The race was the nation’s most polarizing and acrimonious in recent history, presenting Chileans with sharply different visions on a range of issues, including the role of the state in the economy, pension reform, the rights of historically marginalized groups and public safety.

José Antonio Kast, 55, a far-right former lawmaker who has promised to crack down on crime and civil unrest, faces Gabriel Boric, 35, a leftist legislator who proposes raising taxes to combat entrenched inequality.

The stakes are higher than in most recent presidential contests because Chile is at a critical political crossroads. The incoming president stands to profoundly shape the effort to replace Chile’s Constitution, imposed in 1980 when the country was under military rule. Chileans voted overwhelmingly last year to draft a new one.

Mr. Boric, leader of the leftist coalition Frente Amplio, has been a staunch supporter of the push to update the charter, which was set in motion by a wave of protests in late 2019 over inequality, the cost of living and Chile’s free market economy.

In contrast, Mr. Kast campaigned vigorously against establishing a constitutional convention, whose members Chileans elected in May. The body is tasked with drafting a new charter that voters will approve or reject in a direct vote next September.

Members of the convention see Mr. Kast’s rise as an existential threat to their work, fearing he could marshal the resources and the bully pulpit of the presidency to persuade voters to reject the revised constitution.

“There’s so much at stake,” said Patricia Politzer, a member of the convention from Santiago. “The president has enormous power and he could use the full backing of the state to campaign against the new constitution.”

Mr. Kast and Mr. Boric clashed forcefully during the final days of the race, each presenting the prospect of his loss as a catastrophe foretold for the South American nation of 19 million people. Recent polls have suggested Mr. Boric has a slight edge, although Mr. Kast won the most votes during the first round of voting last month.

Mr. Boric has referred to his rival as a fascist and has assailed several of his plans, which include expanding the prison system and empowering the security forces to more forcefully crack down on Indigenous challenges to land rights in the south of the country.

Mr. Kast has told voters a Boric presidency would destroy the foundation that has made Chile’s economy one of the best performing in the region and would likely put the nation on a path toward becoming a failed state like Venezuela.

“This has been a campaign dominated by fear, to a degree we’ve never seen before,” said Claudia Heiss, a political science professor at the University of Chile. “That can do damage in the long run because it deteriorates the political climate.”

Mr. Boric and Mr. Kast each found traction with voters who had become fed up with the center-left and center-right political factions that have traded power in Chile in recent decades. The conservative incumbent, Sebastián Piñera, has seen his approval ratings plummet below 20 percent over the past two years.

Mr. Boric got his start in politics as a prominent organizer of the large student demonstrations in 2011 that persuaded the government to grant low-income students tuition-free education. He was first elected to congress in 2014.

A native of Punta Arenas, Chile’s southernmost province, Mr. Boric made taking bold steps to curb global warming a core promise of his campaign. This included a politically risky proposal to raise taxes on fuel.

Mr. Boric, who has tattoos and dislikes wearing ties, has spoken publicly about being diagnosed with obsessive compulsive disorder, a condition for which he was briefly hospitalized in 2018.

In the wake of the sometimes violent street protests and political turmoil set off by a hike in subway fares in October 2019, he vowed to turn a litany of grievances that had been building over generations into an overhaul of public policy. Mr. Boric said it was necessary to raise taxes on corporations and the ultrarich in order to expand the social safety net and create a more egalitarian society.

“Today, many older people are working themselves to death after backbreaking labor all their lives,” he said during the race’s final debate, promising to create a system of more generous pensions. “That is unfair.”

Mr. Kast, the son of German immigrants, served as a federal lawmaker from 2002 to 2018. A father of nine, he has been a vocal opponent of abortion and same-sex marriage. His national profile rose during the 2017 presidential race, when he won nearly 8 percent of the vote.

Mr. Kast has called his rival’s proposed expansion of spending reckless, saying what Chile needs is a far leaner, more efficient state rather than an expanded support system. During his campaign’s closing speech on Thursday, Mr. Kast warned that electing his rival would deepen unrest and stoke violence.

Mr. Kast invoked the “poverty that has dragged down Venezuela, Nicaragua and Cuba” as a cautionary tale. “People flee from there because dictatorship, narco-dictatorship, only brings poverty and misery,” he said.

That message, a throwback to Cold War language, has found resonance among voters like Claudio Bruce, 55, who lost his job during the pandemic.

“In Chile we can’t afford to fall into those types of political regimes because it would be very difficult to bounce back from that,” he said. “We’re at a very dangerous crossroads for our children, for our future.”

Antonia Vera, a recent high school graduate who has been campaigning for Mr. Boric, said she saw electing him as the only means to turn a grass-roots movement for a fairer, more prosperous nation into reality.

“When he speaks about hope, he’s speaking about the long-term future, a movement that started brewing many years ago and exploded in 2019,” she said.

“The probability of making good on their campaign plans is low,” he said. “It’s a scenario in which it will be hard to push reforms through.”