Where Is Peng Shuai? The Question the I.O.C. Is Too Weak To Ask. 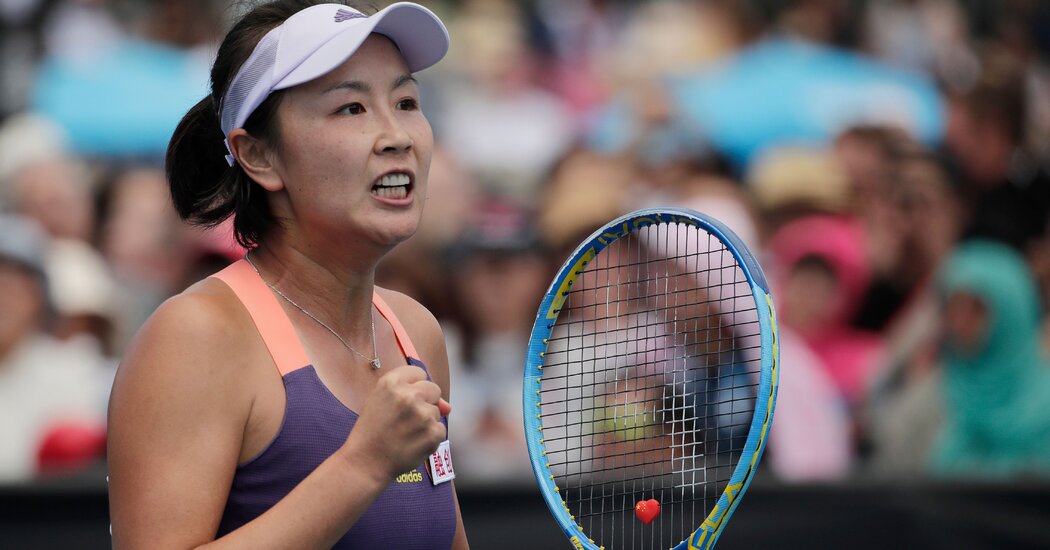 Where is Peng Shuai?

That’s the question the International Olympic Committee and its president, Thomas Bach, should be shouting right now — loud, demanding, and aimed squarely at the leadership in China, set to host the Beijing Games in February.

But instead of firm demands, we’re hearing not much more than faint, servile whispers from Olympic leadership.

Peng, 35, a Chinese tennis star and three-time Olympian, has been missing since Nov. 2, when she used social media to accuse Zhang Gaoli, 75, a former vice premier of China, of sexually assaulting her at his home three years ago. She also described having had an on-and-off consensual relationship with Zhang.

Peng wrote that the assault occurred after Zhang invited her to play tennis at his home. “I was so scared that afternoon,” she noted. “I never gave consent, crying the entire time.”

There have been no verifiable signs of Peng since — no videos or photographs to prove she is safe. Instead, all the outside world has seen is a stilted message, said to have been written by Peng and sent to the WTA, in response to its demand for an inquiry into her allegations. Peng’s supposed response, released by China’s state-owned broadcaster on Wednesday, immediately raised concerns.

“Hello everyone this is Peng Shuai,” it read, before calling her accusation of sexual assault, made just weeks ago, untrue. “I’m not missing, nor am I unsafe. I’ve been resting at home and everything is fine. Thank you again for caring about me.”

It reads like a message from a hostage, a natural concern given the Chinese government’s long history of using force and heavy-handed pressure to crush dissent and flatten those it deems guilty of going against the state.

So, what has been the I.O.C.’s response to a potentially endangered Olympian? A neutered, obsequious statement.

“We have seen the latest reports and are encouraged by assurances that she is safe,” read an official I.O.C. declaration on Thursday.

What world of fantasy is the I.O.C. living in? Given China’s history, we can reasonably assume the latest missive supposedly written by Peng is a fraud. Peng dared to speak up with force and candor, but not the I.O.C., a Swiss-based organization with a history of cowing to dictators that goes back to Adolf Hitler and the 1936 Summer Games.

After some criticism, the committee followed up with another statement, hinting its representatives were talking to the Chinese.

“Experience shows that quiet diplomacy offers the best opportunity to find a solution for questions of such nature,” it said, offering no evidence of prior success. “This explains why the IOC will not comment any further at this stage.”

Bach and the wide cast of leadership at the I.O.C. typically use every chance possible to claim the Olympic mission stands for humanity’s highest ideals. They say all Olympic athletes are part of a family. Peng was among those ranks in 2008, 2012 and 2016. Once an Olympian, they say, always an Olympian.

That’s an admirable idea, but it gets tossed to the wayside when the stakes grow too high.

Looming are Beijing’s Winter Games, fueled by huge fees for broadcasting rights and corporate sponsorships and the billions spent by the Chinese government in an effort to gain respect on the international stage.

Do Bach and the I.O.C. have the guts to stand up for one of their own and call out the dictatorial host of its next showcase for a frightening human rights abuse?

The answer, so far at least, is no.

Contrary to the official I.O.C. statement, nothing is encouraging about this situation.

Not if you know the long history of Chinese authoritarianism. Not if you know how it has been hammering at dissent and silencing anyone with enough clout to threaten national order — including prominent cultural and business figures like Jack Ma, founder of the internet firm Alibaba.

Not if you know about how China has suppressed protest in Hong Kong and Tibet, or if you pay attention to the treatment of Muslim minorities — deemed genocide by the United Nations and dozens of nations, including the United States — despite Chinese denials.

As predicted by critics, or anyone watching with even a bit of common sense, the I.O.C. finds itself compromised. That’s the cost of cozying up to authoritarian hosts like China, which held the Summer Games in 2008, and Russia, the site of the 2014 Winter Games.

Compare the typical fecklessness of Bach and the I.O.C. with the uncompromising approach taken by the women’s pro tennis tour, which has been unafraid to stand up boldly for Peng, a former world No. 1 in doubles.

“I have a hard time believing that Peng Shuai actually wrote the email we received or believe what is being attributed to her,” wrote Steve Simon, chief executive of the WTA Tour, in a statement. “Peng Shuai displayed incredible courage in describing an allegation of sexual assault against a former top official in the Chinese government.”

Simon continued: “Peng Shuai must be allowed to speak freely, without coercion or intimidation from any source. Her allegation of sexual assault must be respected, investigated with full transparency and without censorship.

The voices of women need to be heard and respected, not censored nor dictated to.”

That’s putting people over profit. That’s guts. Professional tennis in China is a lucrative, fast-growing market. The men’s and women’s tours hold high-profile tournaments there, and the WTA Finals are slated for Shenzhen in 2022.

Given the way female tennis players have long led on matters of human rights, it is no surprise that Billie Jean King, Serena Williams, Chris Evert and Martina Navratilova have stood strongly for Peng. And it is no surprise younger stars have followed suit, led by Naomi Osaka, the torch bearer in the Tokyo Games this past summer, who has added her significant stature to the chorus asking “Where is Peng Shuai?”

But Bach and the I.O.C., peddlers of Olympic mythology, have yet to join that chorus. Peng Shuai is part of the Olympic family, but the I.O.C. overlords lack the spine to stand up for one of their own.