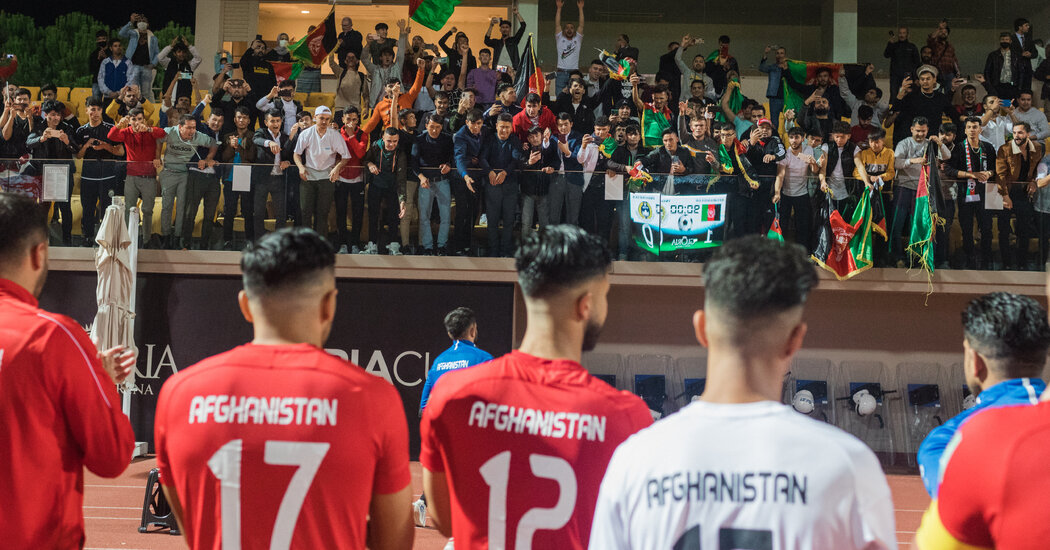 BELEK, Turkey — Anoush Dastgir may be the hardest-working man in soccer, but by Saturday, his job had taken a toll.

Dastgir, the coach of Afghanistan’s men’s national team, was sitting in an empty restaurant at the hotel where he and his team were preparing for an exhibition match against Indonesia. It was 11 p.m., and Dastgir was battling what sounded like a heavy cold. Which wasn’t surprising, given he now had a dozen jobs to do.

It is one of the world’s poorest countries and a place where civil war and Taliban rule once kept the national team from playing a game for almost two decades. The country is considered so unsafe, in fact, that FIFA, soccer’s global governing body, has long banned its teams from playing at home. Most of the time, that hardly mattered: Afghanistan is ranked 152nd in the world. And it has never qualified for a major tournament.

Still, circumstances got even harder over the summer, when the Taliban swept back into Kabul, the Afghan government collapsed and its president, Ashraf Ghani — not to mention tens of thousands of his countrymen and women — fled the country.

Dastgir lost access to part of his team and half his staff in the chaos. Two staff members are now in refugee camps in Qatar. Two others are in Afghanistan, eager to leave. His roster is populated almost entirely by Afghan refugees, or the sons of refugees, who have found shelter in the Netherlands, Germany, the United States, Sweden and beyond over the years, fleeing the various conflicts that have afflicted Afghanistan since the 1980s. But a few still spend time in Afghanistan, and this year even doing that became a concern.

One of Dastgir’s most important players, Noor Husin, who left for Britain when he was six, was in the northern city of Mazar-i-Sharif in July as the Taliban approached. “I was terrified to be honest,” he said. “Because every day there was news, they’re getting closer, they’re in the outskirts of the city. And I was thinking, surely not. You just didn’t think it was going to happen.”

Husin managed to get to Kabul and scramble out of the country, but he — like many of his teammates — thought the national team was finished. “Everyone thought, this is the end, the end of everything,” he said.

Dastgir, though, was determined to keep it alive, to have it continue to serve, he said, as a rare symbol of unity in a country often divided along ethnic or linguistic lines. So a few weeks ago, he picked up the phone and arranged a friendly match — the first since the Taliban took over — against Indonesia. That was the easy part. He then had to find a site for the game, arrange flights and visas for players and source coronavirus tests for everyone. With the Afghan soccer federation’s bank account frozen, Dastgir successfully petitioned FIFA for help financing the trip.

With no kit man, Dastgir also had to ship 450 pounds of training gear himself, and then persuade his brother-in-law to help him wash it. He bought soccer balls, arranged referees and — without a communications team — promoted the game on his private social media accounts. He even negotiated a broadcasting contract to make sure the maximum number of people back in Afghanistan could watch the match. And then, with all that done, he still had to find time to coach the team.

But as midnight neared in the hotel restaurant on Saturday, there was still one important issue to resolve: Which flag would the team fly?

At 31, Dastgir is one of the youngest coaches in world soccer. Born in Kabul, he escaped the country’s civil war with his family shortly after Soviet forces left Afghanistan in 1989. He was just a few months old, and grew up in Pakistan and then India before settling in the Netherlands.

In Europe, he learned Dutch and was scouted by a leading club, NEC Nijmegen. He was eventually called up for the Afghan national team but appeared in a handful of games before a knee injury ended his playing career.

“My coaches said, ‘You have to start coaching,’ because as a player I was kind of leader of the team,” he said. His first opportunity to lead Afghanistan came in 2016, when a foreign coach didn’t turn up for a game amid a contract dispute.

“The players said, ‘I think Anoush can handle it,’” Dastgir recalled. He lost that game but the team had played well. The next time the post came open, in 2018, he was given the job.

By then, he was on the hunt for Afghan players. Many were discovered among the vast Afghan diaspora, refugees and their children spread around the world. When a match against Palestine in Kabul was arranged in 2018, the first international game to be played in Afghanistan in years, Dastgir called in many of his discoveries.

“I wanted to have these players in Afghanistan to feel the country, to see the people, because most of them are born outside the country,” he said. “So if you tell them play for your country, they are like, ‘What is that?’”

Even now, the team’s place as a visible multicultural institution shows up in training sessions.

Instructions were shouted out in Dutch and Pashto. Encouragement was offered in German, Dari and English. Sometimes, Dastgir switched languages midsentence. “My first captain is Tajik,” he said. “My second captain is Pashtun. My third captain is Hazara.” Two of his players, the brothers Adam and David Najem, were born in New Jersey.

Still, as the match neared, the questions of the flag and the anthem remained unresolved. This was not a decision to be taken lightly. The Taliban’s white flag, with the Shahada — the Muslim declaration of faith — printed on it, has replaced the green, red and black tricolor over Afghanistan’s presidential palace. And as the Taliban have instituted a broad ban on music, the national anthem has effectively been outlawed.

Dastgir knew that playing it and flying the old flag would be controversial; the country’s men’s cricket team was rebuked by a Taliban leader after doing so at the Twenty20 World Cup. He knew his choice might cost him his job or worse.

No one in Afghanistan’s camp was sure if any supporters would actually come to watch them play in Belek, a coastal town near Antalya.

Stadium officials worried about coronavirus restrictions were assuaged when Dastgir agreed to pay for security out of his own pocket. There was also the issue of whether the Turkish police might prove to be a deterrent. At least 300,000 Afghan refugees and migrants have found shelter in Turkey in recent years, and many are undocumented. But as the daylight faded and kickoff approached, hundreds of fans lined up outside the stadium gate.

“I want to show I am Afghan,” said Mursal, an 18-year-old student wrapped in a large Afghan flag but wary enough to decline to give her last name. She had fled to Turkey four years ago, after her father was killed in Afghanistan, and had found few opportunities to wave the Afghan flag since she arrived. “It’s our flag. You don’t have another flag. Just this flag, and no one can change it.”

Six hundred supporters — the limit agreed upon with stadium officials — soon streamed in, filling the stadium’s one long grandstand.

A few minutes before kickoff, the teams lined up at midfield. In front of them, two of Afghanistan’s substitutes unfurled a large green, red and black flag, the one Dastgir had carried with him to Belek. The anthem played, a moment beamed to millions of Afghans back home. No one was there to take the traditional prematch photo: The squad’s official photographer escaped to Portugal months ago.

The game was frantic, soundtracked by the constant noise of the Afghan fans. Dastgir, dressed all in black, calmly gave tactical instructions. Late in the second half, he summoned Omid Popalzay, a Dutch-raised midfielder last seen playing in Poland’s fourth tier. In the 85th minute, a few moments after entering the game as a substitute, Popalzay scored. Minutes later, the final whistle blew. Afghanistan had won, and the fans erupted with joy.

One fan jumped 12 feet down onto the running track surrounding the field hoping to get a selfie, but he was intercepted by the police and frog-marched back by his neck. One player, Norlla Amiri, climbed onto the shoulders of a teammate so his infant son could be passed down to him.

Other fans threw their cellphones to the players, asking for selfies. Many wanted pictures with Faysal Shayesteh, a 30-year-old midfielder who has had a globe-trotting professional career since moving to the Netherlands as a boy.

Nearly all Afghan fans knew Shayesteh because of his tattoos, including the one across his chest that shows Kabul’s skyline underneath a fighter jet and an attack helicopter, each bombarding the city with red hearts. Above his left breast were two GPS coordinates: The first is for Hengelo, the city in eastern Holland where he grew up. The other is Kabul, where he was born.

Dastgir watched it all unfold from the back, filming some of it on his phone to post on his Instagram account. No one had done more to make the moment happen than him.