Why the Bradford Pear Tree Is Plaguing the South 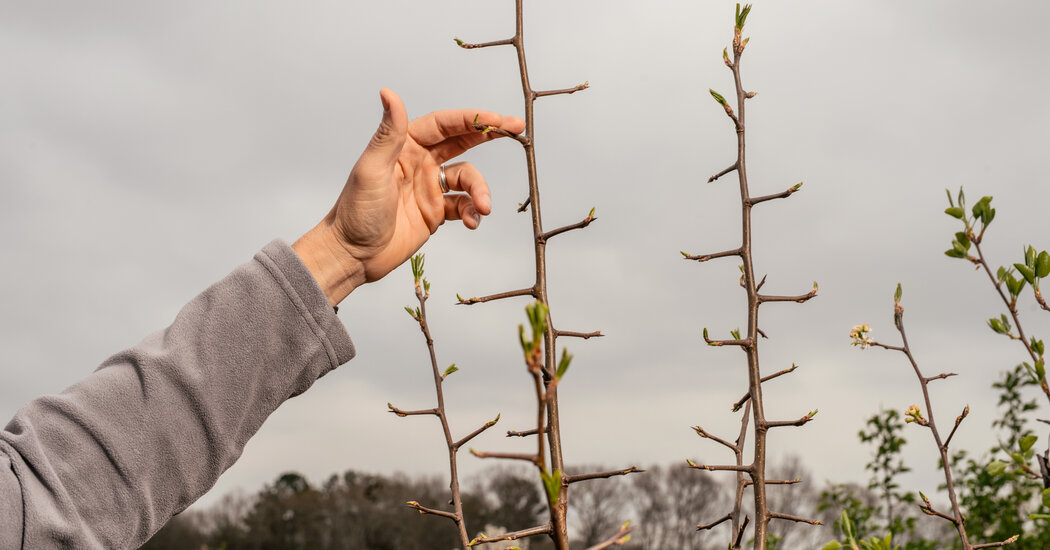 CLEMSON, S.C. — In the distance, beside a brick house in a tidy subdivision, the trees rose above a wooden fence, showing off all that had made the Bradford pear so alluring: They were towering and robust and, in the early spring, had white flowers that turned their limbs into perfect clouds of cotton.

But when David Coyle, a professor of forest health at Clemson University, pulled over in his pickup, he could see the monster those trees had spawned: a forbidding jungle that had consumed an open lot nearby, where the same white flowers were blooming uncontrollably in a thicket of tangled branches studded with thorns.

“When this tree gets growing somewhere, it does not take long to take over the whole thing,” Professor Coyle, an invasive species expert, said. “It just wipes everything out underneath it.”

Beginning in the 1960s, as suburbs sprouted across the South, clearing land for labyrinths of cul-de-sacs and two-car garages, Bradford pears were the trees of choice. They were easily available, could thrive in almost any soil and had an appealing shape with mahogany-red leaves that lingered deep into the fall and flowers that appeared early in the spring.

The trees’ popularity soared during a transformational time, as millions of Americans moved in pursuit of the comfort and order that suburban neighborhoods were designed to provide. “Few trees possess every desired attribute,” the gardening pages of The New York Times declared in 1964, “but the Bradford ornamental pear comes unusually close to the ideal.”

Yet for all that promise, the trees wound up an unwieldy menace, one that has vexed botanists, homeowners, farmers, conservationists, utility companies and government officials in a growing swath of the country across the East Coast and reaching into Texas and the Midwest.

In South Carolina, the fight has intensified. The state is in the process of barring the sale and trade of the trees, becoming the second to do so. Professor Coyle, who tracks plants and insects that have intruded into South Carolina and tries to limit their damage, has organized “bounty” programs, where people who bring in evidence of a slain tree get a native replacement in return.

The downsides of the Bradford pear were subtle at first. Its white flowers, as pretty as they were, emitted a fetid odor that smells almost fishy. But as the trees aged, more and more negatives emerged. They had a poor branch structure, leaving them prone to snapping and toppling in storms, sending limbs onto power lines, sidewalks and the roofs of homes they were supposed to beautify.

But the most far-reaching consequence emerged as pear trees began colonizing open fields, farmland, river banks and ditches, and rising between the pines along the highways from Georgia up through the Carolinas, edging out native species and upending ecosystems. The trees grow rapidly, climbing to as high as 15 feet within a decade. (They can ultimately reach 50 feet high and 30 feet wide.)

“You can’t miss it,” said Tim Rogers, the general manager of a company that sells plants and supplies to landscaping companies. “It’s everywhere.”

The Bradford pear is a cultivar of the callery pear, meaning it is a variety produced by selective breeding — in this case, devising a tree that did not have the thorns of some other varieties and was unbothered by pests.

But like the familiar plot of science-fiction stories, the creation that seemed too good to be true was, indeed, too good to be true. The Bradford pear had been billed as sterile, but that was not exactly right. Two Bradford pears cannot reproduce, scientists said, but they can cross-pollinate with other pear trees, and their seeds are spread widely by birds.

It is the resulting callery pear growth that alarms scientists: These trees spread rapidly, have thorns that are three or four inches long and cluster close together, disrupting life for insects and other plants. “It’s a food desert for a bird,” Professor Coyle said, noting that the trees do not sustain caterpillars and other herbivorous insects. “There’s nothing to eat there.”

The callery pear, which is native to East Asia, was originally brought to the United States by federal researchers who sought a species that resisted blight and could be bred with the European pear to bolster fruit production. But scientists recognized its potential as an ornamental tree, spurring the development of the Bradford pear.

The tree’s popularity was largely concentrated in the Southeast and along the Mid-Atlantic coast. But it has been planted across the country, dotting lawns and the entrances to subdivisions and shopping malls .

“There are some places where I’ve seen entire campuses planted with this one tree,” said Nina Bassuk, a professor and director at the Urban Horticulture Institute at Cornell University. “If you’re there in April, it’s just this sea of white.” But then, she added, “Bradfords became a problem.” Aging trees were falling apart, she said, and “we started noticing them in places where they weren’t planted.”

Officials in South Carolina added the Bradford pear to its State Plant Pest List this year, and initiated a ban that goes into effect on Oct. 1, 2024. Ohio is the only other state that has taken similar measures, with a ban beginning in 2023.

In other states, efforts to ban the trees have faced resistance from the plant industry, researchers said, given how much nurseries rely on their hardiness in using it as rootstock.

But in South Carolina, industry leaders said that researchers convinced them that alternatives were available. The decision was also easier because, as a landscaping tree, Bradford pears had plummeted in popularity. “That plant has been on a decline for a really long time,” said Mr. Rogers, who is also the president-elect of S.C. Green, an industry association.

In the past, customers had sought out the trees, even as their troubles became more widely understood. “I would call them a necessary evil in terms of inventory,” Mr. Rogers said. But those days are long past. “It’s not even in our catalog,” he added.

Scientists and officials said that the public is developing a more sophisticated understanding of the consequences that landscaping choices can have. They point to the Southwest, where drought-friendly designs have grown in popularity as water has become more scarce.

In the South, many were already familiar with the threat of invasive species as the region has grappled with plants like privet and, most of all, kudzu, the Asian vine described as the plant that ate the South, blanketing much of the landscape and breeding myths about the speed and reach of its growth.

Still, state officials and homeowners are left to contend with the countless Bradford pears planted in years past. One Saturday last month, Professor Coyle traveled to Columbia, the state capital, for the latest of the bounty exchanges that he has organized across South Carolina.

The dozens of people who signed up could collect one of the native trees in exchange for proof of a vanquished pear tree. (A selfie posing with the tree sufficed.)

Valerie Krupp had printed out photographs of the Bradford pears that had toppled over in her yard, ruining her gutters and clipping the corner of her house. “I wish I had taken them out a lot sooner,” she said. She picked out a live oak, a Shumard oak and a magnolia, and she said she looked forward to their growing and filling the void left by the pear trees. “I enjoyed the shade,” she said.

As Rick Dorn loaded his replacements into the bed of his truck, he described the torment of dealing with an infestation of callery pear. The thorns might be the worst part. “They will punch a hole into a tire,” he said.

His family owns a spread of about 60 acres near Irmo, a suburb of Columbia. The land has been overtaken by the trees, which, he noted, popped up around the same time as the subdivisions that now surround the property.

Professor Coyle believed that his efforts have notched some progress: Hundreds of trees have been swapped through the bounty programs, and he saw the ban as a major step. Still, they were incremental advances against a force of nature.

“I know this isn’t going to be a quick fix,” Professor Coyle said. “If we’re being honest, I’ll be working on callery pear for my entire career.”

But incremental progress was better than none at all.