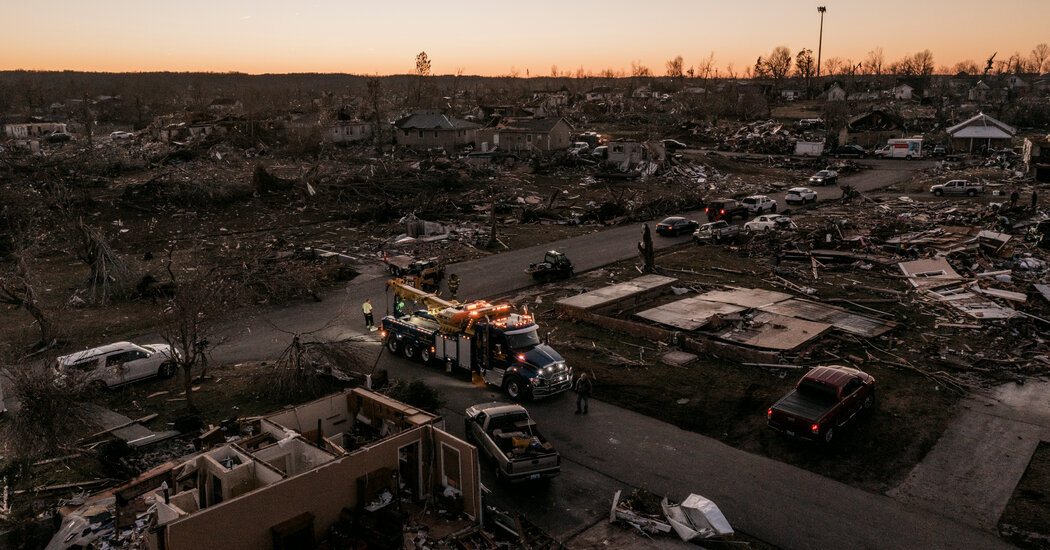 To hear more audio stories from publications like The New York Times, download Audm for iPhone or Android.

Morgan Jackson, a cashier at Casey’s General Store, a gas station in Mayfield, Ky., checked the weather all day Friday as her phone bleeped with loud alerts, friends and family called to compare notes and customers chatted incessantly about the tornadoes that were likely to head their way.

For residents of Mayfield subjected to the flurry of alerts and text messages, the urgent pleadings of television meteorologists and the barrage of warnings on social media, one thing has been clear: This was not a tornado that came without warning.

Ms. Jackson said she was surprised by how accurately forecasters had pegged the timing of the tornado, one of several that swept through Kentucky that night. “They said it would hit at 9:30 and it hit at 9:30,” she said.

Weather prediction technology has become so precise in recent years that tornadoes are almost always foreseen, a vast, if somewhat unheralded, improvement in forecasting.

In the late 1980s, before the use of Doppler radar and other technologies, meteorologists were able to issue warnings for 46 of 88 violent tornadoes in the United States, or just more than half, federal data shows. In recent years, powerful tornadoes have been preceded by warnings 97 percent of the time.

Yet despite the advances in forecasting, tornadoes that strike continue to have deadly consequences — whether because of poor decisions, weak construction or just bad luck. The storms that hit on Friday and Saturday left at least 88 people dead in five states.

“People got the warning but we are still left with the question of why people died,” said Stephen M. Strader, a professor at Villanova University who studies disasters. “Something else failed them.”

Unlike hurricanes, tornado warnings come with a much shorter lead time: around 15 to 18 minutes on average. Friday’s tornadoes had better-than-usual warning times, in some cases three times as long.

But when tornadoes strike at night, as they did last week, residents are more likely to miss the warnings. Tornadoes at night are 2.5 times as likely to result in fatalities, research shows.

The tornado that ravaged western Kentucky was a monster, an EF-3 storm with winds of 136 to 165 miles per hour. With a footprint of up to three-quarters of a mile wide, it shredded warehouses and houses along a path of more than 220 miles.

The drumbeat of warnings began days before, with reports by the national Storm Prediction Center that tornadoes were quite likely.

“It was kind of a no-brainer as far as issuing a warning goes,” said Michael York, a meteorologist at the National Weather Service in Paducah, Ky. “It was one of those that is impossible to miss if you have any training at all.”

But while many Kentucky residents sought shelter where they could find it, others elected to remain in their homes or report to work. Some said they were not sure how seriously to take the dire predictions, or did not think the storm would hit their neighborhood.

At a time when the incidence of extreme weather and natural threats — hurricanes, wildfires, floods — seems to be rising, the availability of so much data on storms and tornadoes can be overwhelming.

“There’s definitely the potential to be getting too much information,” said Alex Anderson-Frey, a professor at the University of Washington who studies the efficiency of tornado warnings.

In Mayfield, Katrina Spradling became deeply worried about the likelihood of tornadoes as she watched the weather forecast all day on Friday; her phone buzzed with alerts and messages on the severity of the storms. She urged her father, Bobby Spradling Jr., whose home on the outskirts of Mayfield did not have a secure place to shelter, to come take cover at her home about 10 minutes away. But Mr. Spradling stayed home.

He was found dead on Saturday morning. The authorities told his family that based on where they found his body, they believed he had tried to leave his home and get to shelter when it was too late.

“I’m shaken and have never seen anything like this,” Ms. Spradling said of the damage to Mayfield. “We talked off and on about creating a shelter, but we never did. I wish we had.”

Even some of those who may have taken the warnings seriously ended up being killed in Friday’s tornadoes for a variety of reasons: because their homes were not strong enough to resist the tremendous force of the wind, because their employers kept them in an unsafe building, because they made poor decisions such as going outside.

Research by Harold Brooks, a senior research scientist at the National Oceanic and Atmospheric Administration’s National Severe Storms Laboratory, shows that about 2 percent of people whose homes are directly struck by a powerful tornado are killed, roughly the same odds of dying after being infected with the coronavirus.

Mr. Brooks, who lives in Oklahoma, has an 8-foot by 5-foot tornado shelter in his house that doubles as a walk-in closet. It has six-inch-thick reinforced concrete walls and a steel door. “That thing is not going anywhere, in any wind on the planet,” he said.

But not everyone has the foresight, the time or the funds to build such a shelter.

Greg Simons described his mother’s home in Dawson Springs, Ky., as small and comfortable but not the safest place to ride out a tornado. If he had spoken with her before the storm, he would have forced her to leave the house, he said. His stepsister, Brandy Wiser, said she talked with their mother, Jennifer Ann Bruce, five minutes before the storm hit.

“I asked if she was OK and she said she was in the hall, safe,” Ms. Wiser said. “I said just be safe and call me when it’s over. Five minutes later, I tried to call her back and it went straight to voice mail. I kept calling.”

Ms. Bruce’s body was found by a neighbor on Saturday morning.

Experts say the United States has reached a point where the technology to predict tornadoes is no longer the main obstacle to saving lives.

The huge strides in tornado prediction rates have been made possible by a cascade of scientific advances. The introduction of Doppler radar in the 1990s and subsequent upgrades allowed forecasters to measure the wind inside of a storm, to distinguish between rain, snow or hail and to see and predict the formation of tornadoes. The proliferation of weather satellites allows scientists even more visibility into the formation of storms — and, crucially, the conditions that might create a tornado. The National Oceanic and Atmospheric Administration operates 16 satellites.

The deluge of data from these technologies is crunched and modeled in real time by some of the world’s most powerful supercomputers.

“In many ways the tornado warning system — and everything that leads up to it — is one of the most incredible success stories in applied science,” Mr. Brooks said. “We don’t miss violent tornadoes essentially ever now.”

Before Doppler was deployed to predict tornadoes, the best the authorities could do was rely on a more primitive form of radar and a small army of weather spotters communicating by ham radio.

The consequences of the leaps in technology have been clear, researchers say.

In the wake of last week’s tornadoes, a number of scientists have made comparisons to a similar event nearly a century ago to illustrate how awareness of a coming danger saves lives.

In 1925, when the best the authorities could do was send warnings by telegraph, a tornado traveled across parts of Missouri, Illinois and Indiana for about 220 miles — similar to the distance traveled by the biggest of the tornadoes that struck on Friday.