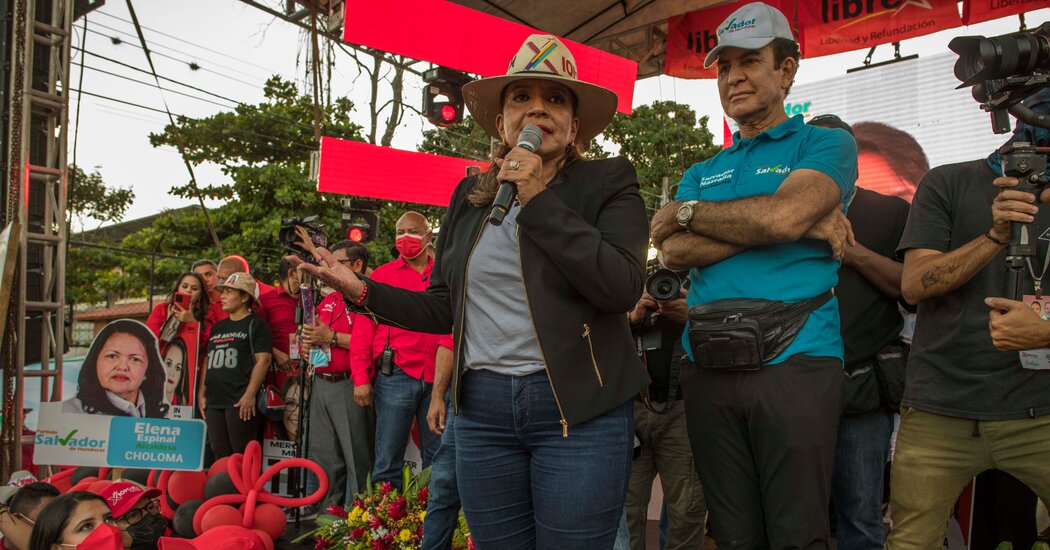 MEXICO CITY — The Honduras opposition candidate, Xiomara Castro, inched closer to an astounding presidential victory on Monday, promising a new era of democratic inclusion in a nation where despair has driven hundreds of thousands to the U.S. border seeking refuge in recent years.

Ms. Castro, 62, held a 20 percentage point lead over the candidate of the incumbent National Party with 51 percent of the ballot boxes counted. The results of the Sunday vote appeared to show a stunning repudiation of the National Party’s 12-year rule, which was shaped by pervasive corruption, dismantling of democratic institutions and accusations of links with drug cartels.

Thousands of Hondurans poured into the streets to celebrate what they believed was Ms. Castro’s insurmountable lead, shooting fireworks and singing “JOH, JOH, and away you go,” a reference to the initials of the deeply unpopular outgoing President Juan Orlando Hernández.

Many voiced hopes that Ms. Castro, should she prevail, would be able to cure the chronic ills that have mired the country in poverty and desperation for decades — widespread graft, violence, organized crime and mass migration.

They also remained wary of the National Party possibly trying to commit electoral fraud in the results that remained uncounted, given that the party’s leaders may face corruption or even drug trafficking charges after leaving office.

“We will recover Honduras, because we are now governed by criminals,” said Mariela Sandres, a student, who celebrated outside Ms. Castro’s campaign headquarters on Sunday night.

The National Party refused to concede defeat, asserting that it will win once all the votes are counted. But in a positive signal for Ms. Castro, the president of Honduras’s business chamber congratulated her on her apparent victory, offering to work with her on rebuilding the country’s economy.

Ms. Castro in some ways represents a break with Honduras’s traditional politics. Her commanding lead, in what has been a largely peaceful election so far, also appeared to present a democratic reprieve from a wave of authoritarianism sweeping Central America.

If the current returns stand, she will become the first female president in a deeply conservative nation, and its first leader to be democratically elected on a socialist platform.

She has promised to rebuild the country’s weakened democracy and bring in all sectors of Honduran society to overhaul a state that has served the interests of a small group of elites since it was a Spanish colony centuries ago. In a speech on Sunday night, Ms. Castro told supporters that she would immediately begin talks with political allies and opponents alike to form a government of national unity.

“Never again will the power be abused in this country,” she said.

Ms. Castro said she would consider legalizing abortion in limited cases and would bring back international corruption investigators who were forced out by Mr. Hernández after they started examining suspected graft in his inner circle.

Yet, Ms. Castro is also deeply tied to Honduras’ political establishment. And her ability to meet campaign promises is likely to be severely challenged by opposition from the more conservative sectors in congress and within her own political coalition.

At her election rallies, Ms. Castro capitalized on Hondurans’ widespread repudiation of Mr. Hernández’s rule. But she has been vague about what her own government would do, beyond showering Hondurans with new subsidies and repealing the most unpopular measures of the current government.

During the closing campaign rally in the business capital of San Pedro Sula, she struggled to remember what those measures were. “What’s that other law?” she asked the crowd, as she attempted to list Mr. Hernández’s policies that she would overturn.

Ms. Castro’s candidacy has been shaped by her marriage to Mel Zelaya, a wealthy Honduran landowner and former president who was deposed in a military coup in 2009, after having tried to emulate the policies of Venezuela’s president at the time, Hugo Chávez.

Mr. Zelaya, who remains a polarizing figure in Honduras, is the founder and the head of Ms. Castro’s political party and has served as her campaign manager. Should her victory be confirmed, he is widely expected to play a prominent role in the administration led by Ms. Castro, who had been living mostly outside Honduras since the coup.

The prospect of a shadow government led by Mr. Zelaya could create tensions with Ms. Castro’s more conservative supporters, who voted for her to break with Mr. Hernández but are wary that Honduras could renew its alliance with Venezuela and Cuba.

Ms. Castro’s ambitious socialist proposals could also complicate relations with the United States, which many in Honduras blame for supporting the controversial elections that brought the National Party to power after the coup.

In her campaign program, Ms. Castro called for creation of a Constituent Assembly that would rewrite Honduras’s Constitution. Mr. Zelaya’s effort as president to draft a new constitution was a main reason for the coup from the conservative military and business elites, who feared a leftist power grab in a country that has been deeply allied with the United States.

She has sought to assuage the elites’ fears by courting businessmen, bringing in technocratic advisers, allying herself to center-right parties and meeting with the United States diplomats.

Ms. Castro has also significantly scaled back her progressive social agenda to dampen conservative attacks. After initially supporting abortion ban exemptions, as well as sex and race education in schools, she recently said these policies should be put to public debate, and began to emphasize her Catholic upbringing.

Ms. Castro’s promises to reduce inequality and cut the cost of living will be complicated by the heavy debt burden left to her by Mr. Hernández’s outgoing government. And her plans to root out corruption could be compromised by accusations of graft made against the family of Mr. Zelaya, and the former president’s personal ties to discredited political elites.

The prospects for change in Ms. Castro’s administration will depend heavily on her coalition’s strength in the new congress. The electoral council is yet to announce any results from congressional races.

“It’s going to be highly difficult to govern without a majority in congress,” said Pedro Barquero, the campaign chief for the Savior of Honduras Party, which is allied to Ms. Castro.

Through her campaign staff, Ms. Castro has declined multiple interview requests before and since the vote.

For his part, Mr. Zelaya said he wanted to rebuild good relations with the United States, calling it Honduras’s vital partner.

“I think the U.S. has understood that sectors of their government have brought the country to an abyss” following the coup, he said. “We hope the Biden administration has learned the lesson and are willing to work with us.”

But Mr. Zelaya declined to describe his current position on Venezuela, which since he was deposed has slid into economic collapse and authoritarianism. All he has said regarding Venezuela’s crisis is that “the people have the governments that they deserve.”