A New Source of Fuel in an Aging Japan: Adult Incontinence 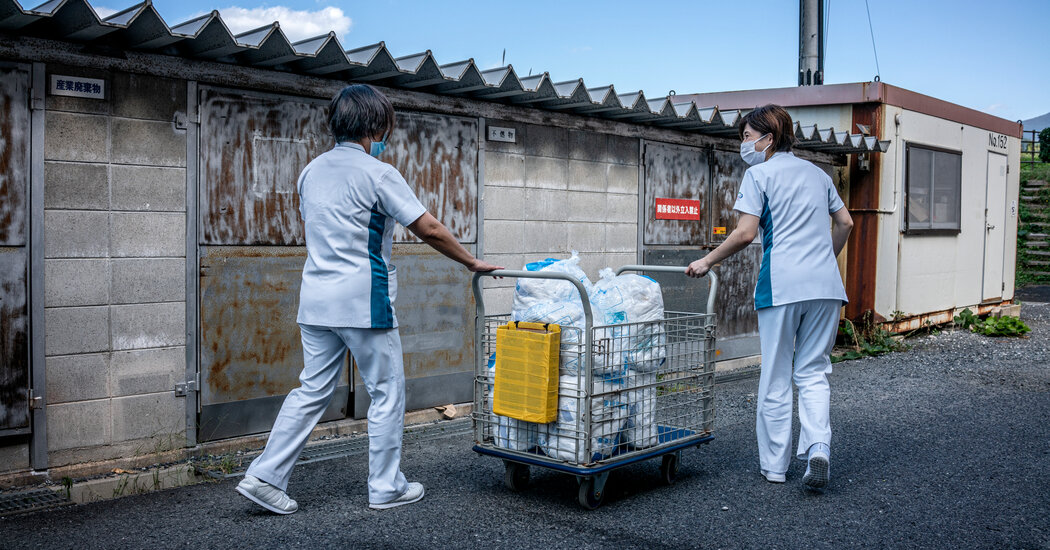 HOUKI, Japan — The restorative waters that flow into the public baths in this town near the coast of western Japan originate from hot springs more than two-thirds of a mile below ground. At the surface, before the water bubbles out of the spouts, it is further heated to 107 degrees Fahrenheit — an ideal temperature for cleansing and soaking weary muscles.

But unbeknown to most bathers, the boiler heating the water runs on a fuel with the uncleanliest of origins: pellets recycled from soiled adult diapers.

In rapidly aging Japan, more diapers are used by older, incontinent people than by babies. As the country groans under the weight of ever-rising mountains of this waste, the town of Houki has become a pioneer in trying to reduce it. By recycling the diapers, which represent about a tenth of the town’s trash, it has diverted garbage that would otherwise be dumped in incinerators and add emissions to the atmosphere.

With many other nations facing a similar demographic implosion, adult diaper waste is a stealthy challenge that looms alongside labor shortages in nursing homes and insufficiently funded pension systems.

“When you think about it, it is a difficult and big problem,” said Kosuke Kawai, a senior researcher at the National Institute for Environmental Studies. “Japan and other developed countries will face similar problems in the future.”

In Houki, a town of just over 10,500 people in Tottori Prefecture, officials were worried about the fast-growing diaper waste and looking at the costs to upgrade an outdated incinerator. They decided to convert one of the town’s two incinerators into the diaper recycling plant and produce fuel that would help reduce natural gas heating costs at the public bathhouse as well.

At the baths, there is nothing advertising the provenance of the boiler fuel. Satomi Shirahase, 45, who was visiting with her husband from Kyoto, was unperturbed when she learned of the source of the heat.

The recycling effort “sounds pretty good to me,” she said in the dressing room after hiking on nearby Mount Daisen, which strongly resembles the more renowned Mount Fuji. “I am not creeped out. It was good water.”

The diaper challenge is especially great in Japan, where more than 80 percent of the country’s waste goes to incinerators — higher than in any other wealthy nation — despite a near obsession with sorting trash. While most other sources of waste are declining in volume as the Japanese population shrinks, incontinence products for seniors are growing by the ton.

The amount of adult diapers entering the waste stream in Japan has increased by nearly 13 percent, to almost 1.5 million tons annually, in the last five years, according to data from the environment ministry. It is projected to grow a further 23 percent by 2030, when those 65 and older will represent close to a third of the population.

Because diapers contain so much cotton pulp and plastic, and swell to four times their original weight after soiling, they require much more fuel to burn than other sources of waste. That leads to costly waste management bills for local municipalities and high volumes of damaging carbon emissions.

And unlike with other products, such as single-use plastics, the use of diapers cannot be restricted without compromising sanitation and health care.

“We can easily eliminate straws and umbrellas on top of cocktails,” said Kremena M. Ionkova, a senior urban development specialist at the World Bank. “But we can’t eliminate diapers.”

Acknowledging the growing problem, Japan’s environment ministry convened a working group last year to discuss alternatives to incineration for diapers. A handful of other municipalities are following Houki and turning the diapers into fuel pellets, while some are experimenting with converting them into material that can be mixed with cement for construction or road paving.

Unicharm, one of Japan’s largest diaper manufacturers, has built a pilot plant in Kagoshima, in southern Japan, where it is recycling diapers back into more diapers.

One of the biggest challenges for recycling is that it requires caregivers to separate the soiled diapers from all other waste. Less than 10 percent of municipalities require households to separate diapers from general garbage, said Hayato Ishii, an official in the recycling promotion division of the environment ministry.

In Houki, individual households do not sort out diapers, but at six nursing homes, aides dispose of the diapers in special odor-cutting bags that are hauled to the recycling plant every weekday.

At the Daisen Rehabilitation Hospital, where 8 out of 10 of the approximately 200 patients require disposable diapers, residents produce about 400 pounds of such waste a day.

On a recent afternoon, Tatsushi Sakata, 33, one of two workers at the diaper recycling plant, collected 35 hefty bags — each containing 30 dirty diapers and all used within the previous 24 hours — from a cinder-block storage space behind the facility and tossed them onto the bed of a Toyota pickup truck.

Mr. Sakata usually gathers close to a ton of the bags on his daily rounds. At the recycling plant, he and his co-worker, dressed in Tyvek body suits, rubber boots and helmets, dump the diapers into a vat the size of a small trailer. They are sterilized and fermented for 24 hours in 350-degree heat, which cuts their volume to a third of their soiled weight. The process converts the diapers into a fluff that is processed through another machine and turned into two-inch-long gray pellets.

The operations slightly evoke the factory scenes from “Soylent Green,” the 1973 dystopian thriller in which nutrition wafers are made from human remains. Despite ceramic and charcoal filters designed to remove foul odors, the machinery emitted a faint yeasty, toasted smell as pellets rained down from a bright orange chute into a large plastic box.

“At the beginning, I did think it was a little creepy because we were dealing with excrement,” said Mr. Sakata, who has worked for 10 years at the plant. “Our purpose is to turn unmanageable garbage into something manageable.”

Tamotsu Moriyasu, the mayor of Houki, said there was no money to be made in the recycling operation, although it did save fuel costs at the incineration plant and reduce transportation costs. He said visitors wanting to learn about the process had come from all over Japan as well as from Indonesia and Tahiti.

At the public bathhouse, an operator dumps the pellets into a large funnel connected by wide plastic tubing to a biomass boiler. The pellets are burned to generate the extreme heat needed to warm up the bathing water. Although the process produces carbon emissions, the pellets are less polluting than either coal or the petroleum gas previously used in the boiler, according to government calculations.

“When I first heard about it, I thought, ‘hmm,’” said Tatsuya Sakagami, 68, a retired city official who occasionally uses the baths. “But adult diapers are just items used by humans.”

“In the past, people would fertilize vegetables with human waste,” he added on a recent afternoon in the bathhouse’s parking lot. Converting soiled diapers into fuel is not dissimilar, he said. “I think it is a good idea because it is ecologically better.”