Amid Variant Fears, U.K. Discovers Limits to Its Virus Strategy 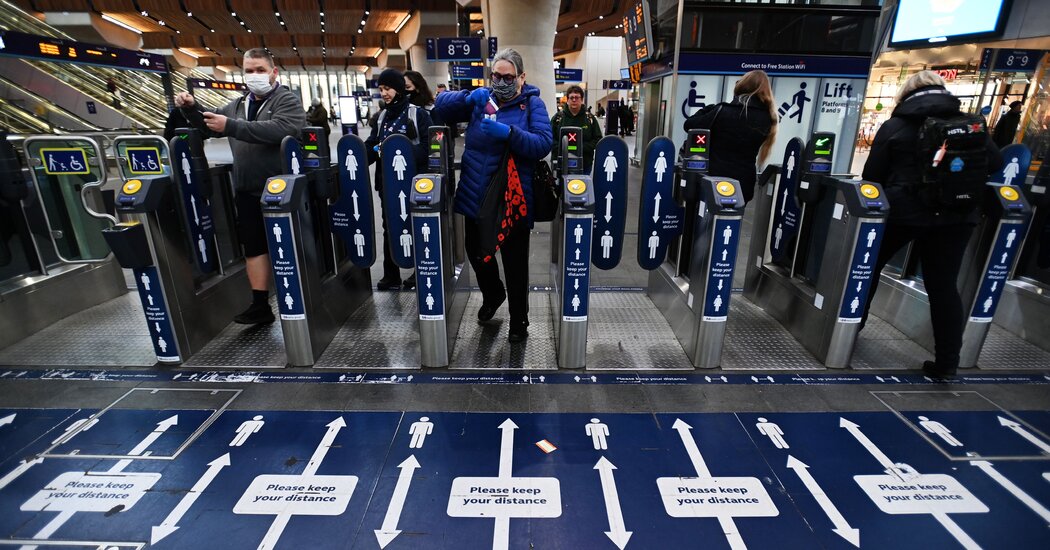 LONDON — At almost every step of the pandemic, Britain has been a coronavirus renegade. It locked down later than its European neighbors in March 2020, rolled out vaccines faster than almost any major country earlier this year, and threw off virtually all restrictions last summer in an audacious bid to return life to normal.

But with worries about a new variant, Omicron, flaring across the world, Britain has edged back in line with its neighbors in rushing to protect itself. Prime Minister Boris Johnson swiftly banned travel from 10 African countries, made face masks compulsory in shops and on public transportation, and on Tuesday greatly accelerated the deployment of vaccine booster shots, hoping to inject every adult by the end of January.

Britain’s approach is still significantly looser than countries like Austria, which are back in national lockdowns. People can gather in pubs without masks, for example, and officials keep promising weary Britons a normal Christmas. But Mr. Johnson said the government was prepared to stiffen its laissez-faire approach, at least for the moment, to stave off another wave of infection.

“We’re going to be throwing everything at it,” Mr. Johnson said at a Downing Street news conference. “We’re taking some proportionate precautionary measures while our scientists crack the Omicron code.”

Public-health experts welcomed the moves as a recognition that there are limits to Britain’s distinctive strategy, which combines a robust vaccination program with an almost total lack of restrictions since July. It showed, they said, that going it alone does not make sense with a fast-moving variant.

“The U.K. has reacted pretty promptly and basically initiated their Plan B, which many people like myself think they should have initiated a couple of months ago, to put off the threat of the new variant,” said Tim Spector, a professor of genetic epidemiology at King’s College London. “They are bringing the booster forward and making it available to anyone, which I think gives the right message.”

Under the new plan, Britain will expand eligibility for a booster shot to anyone 18 and older; they had previously been restricted to people over 40. It will shorten the time between shots to three months from six months, drawing on 400 military personnel to help deliver the extra doses. And it will offer a second vaccine shot to children aged 12 to 18, rather than only to those 16 or older.

The government will require all visitors to take a Covid test by the end of their second day after arrival in the country and quarantine until they receive a negative result. But officials brushed aside a call by the authorities in Scotland and Wales to impose a mandatory eight-day quarantine on all people who enter the country.

Even without the new variant, Britain has been reporting cases at a rate of more than 40,000 a day. The government has tolerated that high number because 80 percent of adults are fully vaccinated, which has weakened the link between infections and hospital admissions. About 30 percent of adults have gotten booster shots.

While the new regulations on travel and face masks bring Britain closer to other European countries, Professor Spector, who leads the Zoe Covid Study, which tracks Covid-19 symptoms, noted that “by comparison with other countries, the restrictions are still pretty mild.”

He also pointed out that Britain was slow out of the gate last week after news of the variant first emerged. It allowed passengers from African nations who landed in Britain to disperse into the country without testing them.

The government has stopped short of ordering people to work from home or mandated vaccine passports or masks in restaurants in England. France requires vaccine passports for restaurants. Spain and Italy mandate the wearing of masks in schools. In England, the Department of Education only advised students 12 and older to wear masks in communal areas, beginning Monday.

Mr. Johnson declined to advise people to cancel Christmas festivals, Nativity plays, or other social gatherings — parting company with one of his top health advisers, Jenny Harries, who said earlier that people should consider cutting back on socializing during the holiday season to curb potential transmission.

“I’m still confident that this Christmas will be considerably better than last Christmas,” said Mr. Johnson, alluding to the coal in British stockings last year after the rampaging Alpha variant forced the government to impose a lockdown.

Much of Britain’s strategy still hinges on its faith in vaccines, one of the few bright spots in its otherwise erratic response to the pandemic. Britain’s rapid rollout buoyed the Johnson government and gave it both the political capital and epidemiological case for easing pandemic restrictions in July — a policy it has stuck with even as the weather has chilled and cases remained stubbornly high.

“Our strategy is to buy the time we need to assess this variant,” the health minister, Sajid Javid, said on Tuesday. There are now 13 confirmed cases of the Omicron variant in England and nine in Scotland, he said, adding that it was not clear whether the most recent cases were linked to travel from Africa or community transmission.

On London’s busy streets, already twinkling with Christmas lights, some said the new rules seemed to be making a difference, after months in which mask-wearing habits had become rather desultory.

“Everyone’s wearing masks, and there’s a lot more police presence at stations,” said Joanne Cairns, 42, a marketing officer who arrived in London on Tuesday from the north of England.

But Matteo Grios, 32, said he found the patchwork of rules confusing. “Masks on public transport aren’t really going to stop the spread of the virus when you have big events happening at stadiums, or pubs where people get drunk,” he said.

Mr. Johnson’s reluctance to impose sweeping measures reflects pressure from his own Conservative Party. Experts say it is unlikely he would find robust support from restive lawmakers, some of whom flaunt their distaste for such measures by refusing to wear masks in Parliament.

While the House of Commons voted in favor of the mask mandate and travel restrictions on Tuesday, a handful of Conservative lawmakers warned against what they called the government’s authoritarian drift.

“Boris Johnson does face quite a lot of opposition on his backbench,” said Jill Rutter, a senior fellow at the Institute for Government, a London-based research group. She noted that he had alienated members with his handling of issues like a row over Conservative lawmakers who have lucrative second jobs.

Still, unlike last spring, when Mr. Johnson dragged his heels on imposing a travel ban on India after the emergence of the Delta variant, Britain acted quickly this time. Critics suggest he delayed putting India on a “red list” back then to avoid antagonizing New Delhi at a time when Britain was keen to strike a trade deal.

“The government has been stung by that criticism,” Dr. Rutter said.

Some experts chalk up Britain’s faster response to simple trial and error, after nearly two years of grappling with the ever-shifting challenges of the pandemic. On masks, for example, officials initially played down their efficacy, then urged people to wear them in confined spaces, before relaxing the guidance again in July.

“No country has found a good way of living with this virus,” said Devi Sridhar, head of the global public health program at the University of Edinburgh. “Going it alone with mixed strategies and restrictions has not worked out well.”