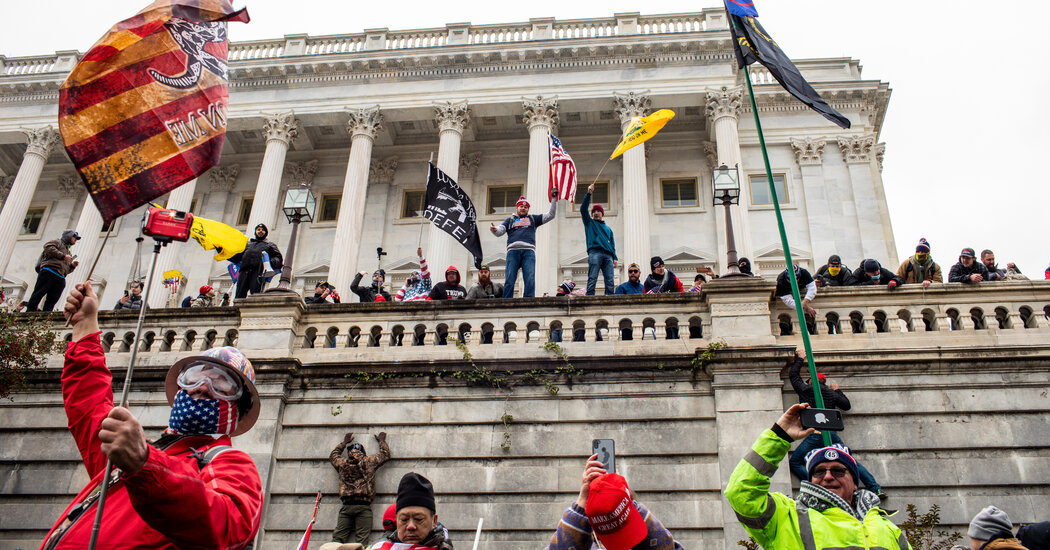 WASHINGTON — A federal appeals court ruled on Thursday that Congress is entitled to see White House records related to the Capitol attack on Jan. 6, rejecting former President Donald J. Trump’s claim that he still has the power to keep the material secret.

In a 68-page ruling, a three-judge panel of the United States Court of Appeals for the District of Columbia held that Congress’s oversight powers, backed by President Biden’s decision not to invoke executive privilege over the material, outweighed Mr. Trump’s residual secrecy powers.

Invoking the aphorism attributed to Benjamin Franklin that the founders had given the country a republic “if you can keep it,” Judge Patricia A. Millett wrote that Jan. 6 “exposed the fragility of those democratic institutions and traditions that we had perhaps come to take for granted,” against which Mr. Trump’s arguments for secrecy were “not close to enough.”

“Former President Trump has provided no basis for this court to override President Biden’s judgment and the agreement and accommodations worked out between the political branches over these documents,” she wrote. “Both branches agree that there is a unique legislative need for these documents, and that they are directly relevant to the committee’s inquiry into an attack on the legislative branch and its constitutional role in the peaceful transfer of power.”

Judges Millett, Robert L. Wilkins and Ketanji Brown Jackson — the other two judges on the panel — were all appointed by Democratic presidents. Mr. Trump is almost certain to appeal their ruling to the Supreme Court, which is controlled by a six-member bloc of Republican appointees.

The appellate panel had issued a short-term injunction to block the National Archives from turning over the records while it considered the matter. It said that it would leave the injunction in place for two weeks to give the former president’s legal team time to ask the Supreme Court to intervene.

The case has raised novel and untested constitutional questions about the scope and limits of a former president’s ability to keep records from his administration secret when his successor declines to invoke executive privilege.

The dispute centers on a demand by a special House committee investigating the events of Jan. 6, when Mr. Trump led a fiery “Stop the Steal” rally and his supporters then stormed the Capitol to try to block Congress from certifying President Biden’s Electoral College victory.

Invoking a provision of the Presidential Records Act, a post-Watergate law that governs access to former administrations’ files, the Jan. 6 committee requested detailed records about Mr. Trump’s movements and meetings leading up to and on the day of the crisis. The National Archives began identifying batches of responsive records in preparation to turn them over on a rolling basis.

Mr. Trump, however, objected to the release of some of the first batch of files as a matter of executive privilege. After Mr. Biden declined to back his objection, saying it was in the national interest for the oversight committee to see the records, Mr. Trump filed a lawsuit seeking to keep the files secret.

A Federal District Court judge — Tanya S. Chutkan, also a Democratic appointee — ruled in November that Congress should receive the files, prompting Mr. Trump to appeal. Specifically at issue is whether he is so likely to ultimately lose the case that the National Archives should be permitted to turn over records right away, or whether they should stay blocked while the case is fully litigated.

Representative Bennie Thompson, Democrat of Mississippi and the chairman of the Jan. 6 committee, has said he wants to wrap up by “early spring.” If so, the committee would need access to the files by late winter for the information to be part of any report.

Both in office and out, Mr. Trump has pursued a legal strategy of stonewalling subpoenas and using the generally slow pace of litigation to run out the clock on congressional oversight efforts.

But at both stages of the case so far, the judges have moved unusually quickly. Judge Chutkan ruled against the former president just over three weeks after he filed the lawsuit, and the appeals court panel ruled against him less than a month after his appeal was docketed.

In response to the attack, Mr. Biden and Congress “have each made the judgment that access to this subset of presidential communication records is necessary to address a matter of great constitutional moment for the Republic,” Judge Millett wrote. “Former President Trump has given this court no legal reason to cast aside President Biden’s assessment of the executive branch interests at stake or to create a separation of powers conflict that the political branches have avoided.”

The courts have been grappling with what general rule or legal test should govern not only this dispute but any future ones in which a sitting president and a former one disagree over whether to invoke executive privilege over particular documents.

Mr. Trump’s legal team has argued that disclosing the files would harm the executive branch by making presidents’ advisers fearful of providing candid advice, lest it be exposed. But Mr. Biden, through his White House counsel, has decided that it is in the national interest for the Jan. 6 committee to get to the bottom of what happened so that it never happens again.

Noting that many presidents — including Mr. Trump — have waived executive privilege from time to time, Judge Millett wrote that Mr. Biden was best positioned to weigh the general principle of confidentiality against competing needs and interests involving the executive branch.

“Mr. Trump has made no record nor even hinted to this court what context or information has been overlooked or what information could override President Biden’s calculus,” she wrote. “We cannot just presume it. Nor can we, on our own, hunt through the documents for sensitivities or concerns that have never been articulated by Mr. Trump.”

Speaker Nancy Pelosi applauded the ruling. “Today, the courts have once again rejected the former president’s campaign to obstruct Congress’s investigation into the Jan. 6 insurrection,” she said in a statement. “No one can be allowed to stand in the way of the truth — particularly not the previous president, who incited the insurrection.”

Jesse R. Binnall, a lawyer for Mr. Trump in the case, did not respond to a request for comment.

The ruling came as the House committee investigating the Capitol attack announced that it would vote on Monday to recommend that Mark Meadows, Mr. Trump’s former chief of staff, be found in criminal contempt of Congress for defying its subpoena.

Representative Steny H. Hoyer of Maryland, the No. 2 House Democrat, said the chamber could vote to send the contempt referral to the Justice Department as soon as Tuesday.

Mr. Meadows has filed suit against the committee seeking to persuade a federal judge to block its subpoenas, which he called “overly broad and unduly burdensome.”

The panel has interviewed nearly 300 witnesses, including four on Thursday, but it has voted twice to find uncooperative allies of Mr. Trump in contempt.

Among the witnesses interviewed on Thursday in a nondescript federal office building in Washington were Ali Alexander, a prominent organizer of “Stop the Steal” rallies who has ties to far-right members of Congress, and Kash Patel, a former Pentagon chief of staff who was involved in discussions about Capitol security and was in constant contact with Mr. Meadows on Jan. 6.

After his deposition ended, Mr. Patel said he shared the Defense Department’s “preparation for and response to unrest at the Capitol.”

“Though I have had major concerns about the fairness of the proceedings,” he said in a statement, “I appeared to answer questions to the best of my ability.”