As French Elections Loom, Macron Tries to Strike a Balance 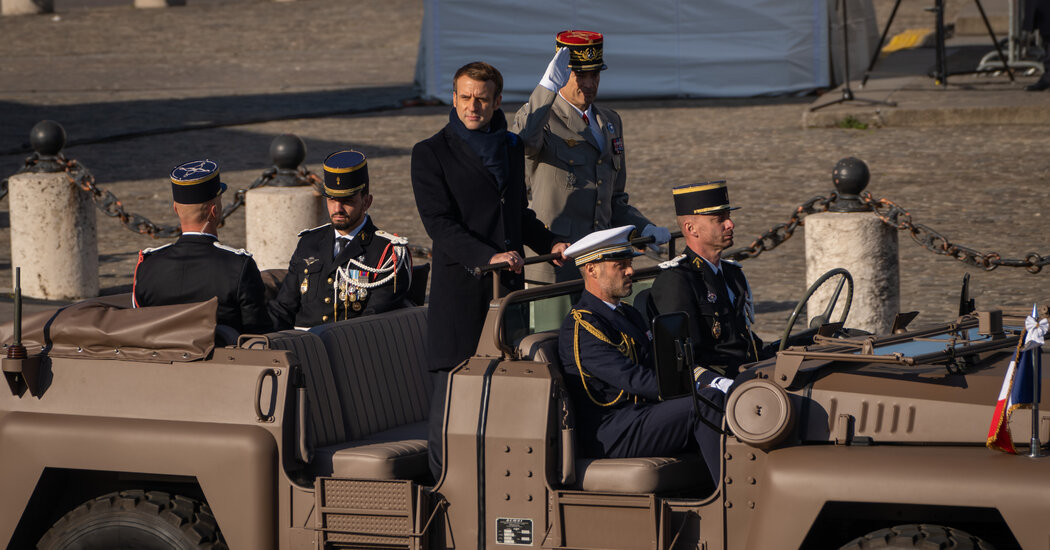 PARIS — Rarely has a modern French leader embraced the powers of the presidency as forcefully as Emmanuel Macron. From his earliest days in office, Mr. Macron was called “Jupiter” by the news media, the king of the gods who ruled by hurling down lightning bolts.

But if that image has helped Mr. Macon push through his agenda, it has also made him a special focus of anger among his opponents in a way extraordinary, even by the standards of a country where the power of the presidency has little equivalent in other Western democracies. “Death to the king” has been a frequent cry in recent years during street protests, along with makeshift guillotines.

As elections approach in April, that image has also become a political liability and left Mr. Macron struggling to strike the right balance between quasi king and electoral candidate in a political culture that swings between an attachment to monarchy and a penchant for regicide.

Still, Mr. Macron has taken full advantage of presidential prerogatives to so far avoid even declaring his candidacy for a second term — though it is considered a foregone conclusion. That has allowed him to delay descending from the throne of the “republican monarch,” as the presidency is sometimes called, to engage in early battle with his opponents.

Instead, to increasing criticism, he has run a stealth campaign for months, reaching out to voters and leaving his challengers to squabble among themselves.

“His goal is to show that he’s a good-natured monarch, a human monarch, but with authority,” said Jean Garrigues, a leading historian on France’s political culture. “His challengers’ goal is to show Macron as a helpless monarch, someone who has the powers of a monarch, but who’s incapable of putting them to use.”

“That’s the great French paradox,” Mr. Garrigues added. “A people permanently in search of participatory democracy who, at the same time, expects everything of their monarch.”

France’s president as a “republican monarch” was the product of the father of the Fifth Republic, Charles de Gaulle. The wartime hero and peacetime leader, through a disputed national referendum in 1962, turned the presidency into a personalized, popularly elected office, an all-powerful providential figure.

“You have power around one man who is the politician with the most power in his system of all Western nations,” said Vincent Martigny, a professor of political science at the University of Nice and an expert on leadership in democracies. “There is no equivalent of the power of the president of the republic, with checks that are so weak.”

Mr. Macron, experts say, chose two weak prime ministers in a bid to exercise direct control over the government, even replacing his first prime minister after he became too popular. At the same time, as president, Mr. Macron is not held accountable by Parliament, unlike prime ministers.

“We shouldn’t mix the roles of the president and the prime minister,” said Philippe Bas, a center-right senator who served as secretary general under President Jacques Chirac in the Élysée Palace. “What Macron has done is to absorb the function of the prime minister, which is a problem because he can’t appear in Parliament to defend his draft laws.”

That imbalance has allowed Mr. Macron to push economic reforms through Parliament, sometimes with little consultation — or no vote, in the case of an overhaul of the French pension system that had provoked weeks of strikes and street protests, but was ultimately put on hold because of the coronavirus pandemic.

Mr. Macron oversaw a crackdown on Yellow Vest protesters that raised the issue of police violence to a national level. His pandemic measures were adopted behind the closed doors of a “defense council,” and included a state of emergency and one of the strictest lockdowns among democracies. He has not fulfilled an earlier pledge to empower Parliament by introducing proportional representation.

Mr. Macron’s full embrace of presidential prerogatives and his image of aloofness combined to expose the limits of France’s democratic institutions, Mr. Martigny said. Protesters have directed their anger at Mr. Macron, he added, because the increasingly weak Parliament and other government institutions are incapable of addressing their concerns.

“Doubts about the institution of the presidency have come to the fore much more during Macron’s five years in office, especially during the Yellow Vest crisis, which showed there was a real problem with the system,” Mr. Martigny said.

He added that Mr. Macron tried to work around the institutional limits with democratic experiments. He defused the Yellow Vest protests, which were set off by a rise in the gasoline tax, by single-handedly engaging in marathon town hall events for two months in a “great debate.” And he announced the creation of a citizens panel to draw up proposals on climate change.

The campaign begins. French citizens will go to the polls in April to begin electing a president. Here is a look at the candidates:

A center-right candidate. Valérie Pécresse, the current leader of the Paris region, recently won the nomination of the Republicans by adopting a vocabulary with racial and colonial undertones. She now faces the difficult task of enlarging her support base.

The far-right veteran. Marine Le Pen, who has long used fiery rhetoric to fight her way to power in France, is seeking to sanitize her image. She finished third in 2012 and was defeated by Mr. Macron in the 2017 runoff.

But the experiments simply showed that power flowed through the presidency, Mr. Martigny said. “The debate came to an abrupt end,” he said.

Brice Teinturier, the director of the Ipsos polling firm in France, said that Mr. Macron, realizing his Jupiterian image was a liability during the Yellow Vest crisis, has by now largely succeeded in turning his strong “Bonapartist” style into an electoral advantage. He noted that 60 percent of voters said Mr. Macron had presidential stature, 20 percentage points more than his closest rivals.

“Even those who didn’t vote for him recognize in him this presidential dimension,” Mr. Teinturier said. “It rests on a mix of personification, decision-making, a style that is flamboyant, too much so for some people, that brings back an image of arrogance that still sticks to him. But it commands admiration.”

Outside France, with his talk of a “start-up nation” and of transcending traditional politics, Mr. Macron projected an image of modernity early on. But in France, even before he ran for president in 2016, he had raised eyebrows with what Mr. Garrigues, the historian, described as an “almost reactionary conception” of the presidency.

Mr. Macron rejected his two predecessors’ attempts to modernize the institution, Mr. Garrigues said. In an interview in 2015 with the magazine Le 1, Mr. Macron said that democracies were incomplete. “In French politics,” he said, “the absent figure is that of the king, whose death I think fundamentally the French people did not want.”

Once elected, Mr. Macron moved to fill that supposed void — giving his victory speech in front of the Louvre, the former royal residence, and visiting the tombs of past kings at the St.-Denis Basilica. His spokesman at the time even framed Mr. Macron’s pressing the flesh in crowds as a “form of transcendence”: “The king touches you, God heals you.”

Gaspard Koenig, a philosopher who has begun a quixotic presidential campaign, described de Gaulle’s transformation of the presidency as a “democratic trauma” for France. The current system inspires unrealistic expectations among voters, who have grown increasingly disillusioned, he said.

“One man is supposed to save everybody and is guilty of all the wrongs in the country,” Mr. Koenig said.

Even as Mr. Macron has tried to shed his Jupiterian image, in his recent interview, he still spoke from the royal grandeur of the Élysée Palace’s ballroom, noted Alexis Lévrier, a historian who analyzed Mr. Macron’s relationship with the news media. Sometimes he slipped into the tone of a king addressing his people, albeit now perhaps kinder than before, Mr. Lévrier added.

Mr. Macron acknowledged saying hurtful things during his presidency, like describing society as divided between “people who succeed and people who are nothing.” He had learned, he said.

As the television camera framed Mr. Macron’s face in a close-up, he said he had learned “to better love” the French people, “with more indulgence, benevolence.”