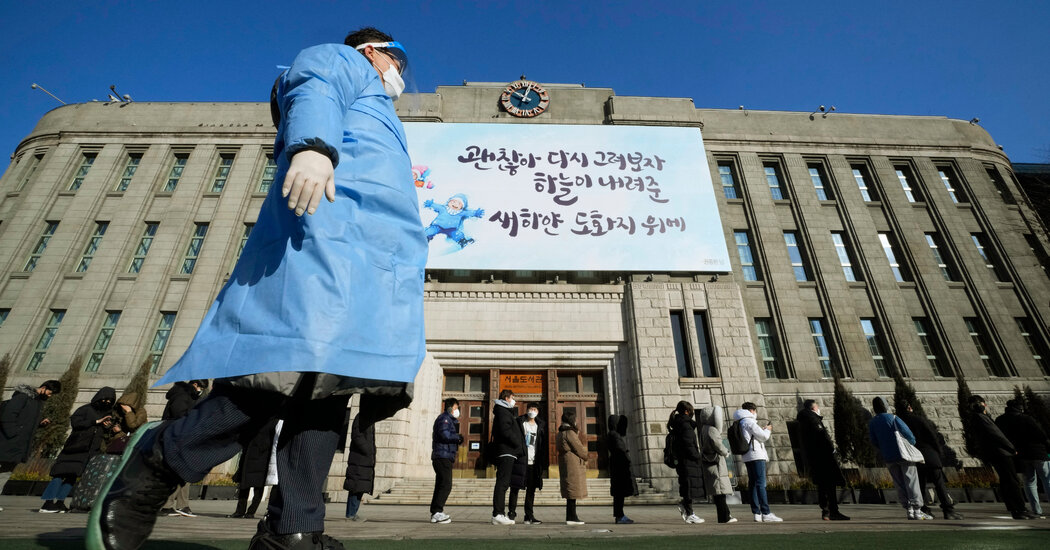 SEOUL — For the past two years, South Korea waged a successful battle against Covid-19 with a so-called three-T strategy: it ramped up lab “tests” to ferret out infections, it “traced” contacts using modern technology, and it “treated” patients by keeping them in isolation, where they were monitored by the government.

But as the fast-spreading Omicron variant threatens to overwhelm the public health system, that strategy now appears unsustainable — and it may even be pointless, South Korean officials say. Now, they are shifting the country’s pandemic focus to a new game plan: “select and focus.”

I​n the past week, South Korea has begun asking patients who test positive to simply look after themselves at home, while​ the country redirects resources to those who are most vulnerable. This new approach has unsettled ​people who have grown used to the government’s heavy-handed virus intervention, and as the number of​ people fending for themselves at home has surged, so have the complaints.

Some say they were not put through when they called ​pandemic hotlines seeking information.

Being left alone has felt like “home abandonment” to many.

Medical supplies the government promised to deliver — such as thermometers, oximeters, hand sanitizer and other pandemic necessities — have failed to arrive on time.

“The government’s partially hands-off approach is a shock to people who have dutifully followed what the government told them to do, like wearing masks and getting vaccinated, and in return expected it to take responsibility for protecting their lives,” said Kim Woo-joo, president of the Korean Vaccine Society. “It could feel like a survival-of-the-fittest situation.”

By Tuesday, the government had mobilized thousands of neighborhood clinics to help ease the bottleneck for those seeking help at home. Health officials have tried to reassure people that despite initial disturbances, the recent policy shift was inevitable, compelled — and even justified — by the Omicron data.

Until last year, South Korea had never had more than 7,849 new patients a day. But as Omicron became the dominant variant, the daily caseload soared to 93,135 on Thursday. The government expects up to 170,000 new patients a day later this month. That is simply too many patients to provide all of them with the same time and attention that it once did.

Fortunately, Omicron has proved less dangerous than the Delta variant. Even as Omicron has surged, the number of Covid-19 fatalities dropped from the daily record of 109 on Dec. 23 to 36 on Thursday. The number of seriously ill patients in hospitals fell from around 1,000 in mid-December to 389 on Thursday. People in their 60s and older accounted for 93 percent of all fatalities.

“We must use our limited resources more effectively, focusing on preventing high-risk patients from getting seriously ill or dying,” said Health Minister Kwon Deok-cheol.

Under its new strategy, the government will dedicate its monitoring efforts to high-risk patients who are staying at home — those in their 60s and older and people with pre-existing medical conditions — supplying them with at-home treatment kits and calling twice a day to check on their condition.

Other patients who test positive must monitor their own symptoms at home and seek help only when their condition worsens. Health workers will no longer call them once a day or supply food and other daily necessities, as they did until last week. Instead, the patients’ family members are now free to go out for essential supplies if they are vaccinated.

Critics have said the government’s new approach disadvantages underprivileged classes, like poor people who lack access to medical care or other social services.

“It’s tantamount to letting the virus spread, rather than doing everything possible to contain its spread,” said ​Woo Seoc-kyun, a representative of the Association of Physicians for Humanism​, a nationwide doctors’ group​. “It threatens to reverse what we have achieved so far through a tight management of the pandemic, like keeping the number of fatalities low.”

The government said that even if the daily caseload soared, ​it would still consider lifting restrictions further so that South Korea could switch to a “life with Covid-19,” treating the disease like “seasonal flu,” provided that the number of seriously ill patients was kept under control.

Whether the government can keep up with the Omicron surge well enough to make such a shift is still up for debate. This week, the United States put South Korea on its “Do Not Travel” list. The number of people being treated at home surged from 150,000 last week to 314,000 on Thursday and is expected to grow.

And so, too, could the number of seriously ill.

Jung Jae-hun, a professor of preventive medicine at Gachon University in South Korea, estimated that the daily caseload would peak at more than 200,000 and stay at that level throughout March. Another estimate, by the government’s National Institute for Mathematical Sciences, predicted as many as 360,000 new patients a day by early next month.

The authorities are preparing more hospital beds for the seriously ill as a precaution. They are also asking neighborhood clinics to pitch in to treat at-home patients remotely. Nearly half of the workers at government-run health clinics in Gyeonggi Province, which surrounds Seoul, called for an immediate relief from the “extreme stress” caused by a crushing workload, according to a recent survey.

Last week, South Korea retired its GPS monitoring tool used to enforce isolation — a smartphone app that alerted health workers when patients left home without permission. Many of the 60,000 workers who monitored those movements on the app will be now redeployed to assist vulnerable patients at home, delivering medicine and manning hotlines.

“There has been a bottleneck in putting calls through, as we were trying to handle a sudden spike in patients,” said Lee Ki-il, a senior disease-control coordinator.

The government’s ​changing attitude was not solely influenced by data. An increasingly impatient public​ has also become more vocal about the need for a new approach.

Vaccines and boosters. Although new federal data suggests that the effectiveness of booster shots wanes after about four months, the Biden administration is not planning to recommend fourth doses of the coronavirus vaccine anytime soon.

Since South Korea began banning unvaccinated people from entering restaurants, cafes, shopping malls and other crowded places, a flurry of lawsuits has followed. The litigants claimed that the restrictions discriminated against the unvaccinated and violated the freedom of citizens, as well as the rights of business owners.

“The government is infringing upon our constitutionally guaranteed right to education,” said Yang Dae-rim, a high-school senior who joined a lawsuit against the government’s plan to ban unvaccinated teenagers from the after-school cramming programs known as hagwon, and from study cafes.

The government later removed hagwon​​ and study cafes from the list of places that required proof of vaccination.

After two years of battling the virus, South Korea has learned that the cost of maintaining its vigorous pandemic protocols is unsustainable in the long term, said Dr. Jung, the Gachon University professor. More than 86 percent of the population has received at least two doses of a vaccine.

The government has also urged people to get booster shots, noting that more than 60 percent of those who died or were seriously ill had received no shots or only one. ​But vaccination alone has not been enough to end the pandemic.

“We cannot end it like we end a war,” Dr. Jung said. “It will just gradually become something we don’t have to take seriously.”