At Ivana Trump’s Funeral, a Gold-Hued Coffin and the Secret Service 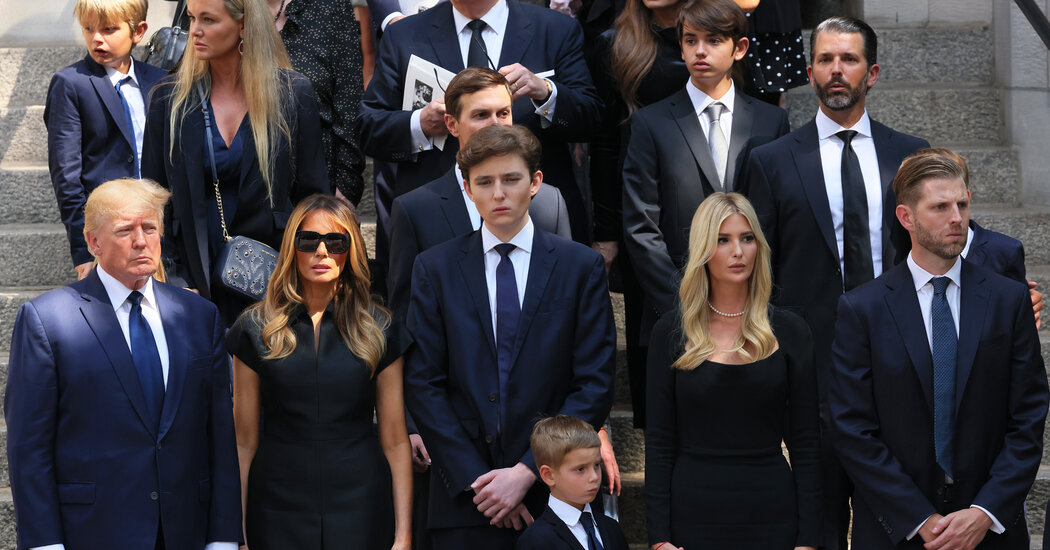 In death, as in life, her famous former husband loomed over Ivana Trump’s story.

On Wednesday afternoon, when a funeral was held for Ms. Trump at an Upper East Side Catholic church, former President Donald J. Trump, along with his current wife, Melania, was there, seated in the front row, across from their three children: Ivanka, Eric and Donald Jr.

The Trump Organization had handled the funeral arrangements, and the coffin had a gold hue. The Secret Service stood by.

Outside the church, St. Vincent Ferrer, photographers and about 100 gawkers stood behind barricades. Perhaps the only sign anyone held up said: “PRAYERS AND CONDOLENCES TRUMP FAMILY. GOD BLESS AND PROTECT YOU.”

Inside, the church was less than half full. There were plenty of Hermès bags but few boldfaced names from the gilt-covered slice of Manhattan society the couple had inhabited in the 1980s and 1990s.

Most of the speeches about Ms. Trump, who died last week at 73 inside her apartment in New York, focused on her indefatigable drive, shaped by growing up in Czechoslovakia behind the Iron Curtain. Those eulogizing her also talked about the friendship that Ms. Trump and her ex-husband had managed to forge, despite the bitter tabloid divorce. (Ms. Trump was married briefly then widowed before her marriage to Mr. Trump, and the two husbands who followed him died before her.)

Her children offered a loving glimpse at her forceful parenting style.

In a speech, her son Eric, 38, described his mother as the embodiment of the American dream, something like a mix of Joan Rivers and Claudia Schiffer, he said.

“She had brains, she had beauty, and she had grit,” he said, going on to assert that she had won the “hearts and minds of every single person in the U.S. on the Home Shopping Network and QVC.”

As a parent, he said, she “ruled with an iron fist and a heart of gold.”

Those two things were the subject of much of Donald Trump Jr.’s speech, which followed soon after.

“In the tumultuous times of the last few years, with all the attacks we faced,” Mr. Trump, 44, said, “she was the first person to call and see if I perhaps wanted, or maybe needed, to move back in with her. That call was simultaneously the sweetest and most emasculating thing ever. And she could do that with the best of them, and usually it was on purpose.”

When he was a small child, Mr. Trump said, he went with his family to the Hamptons. While there, he acted at Gosman’s (Montauk’s best-known seafood spot) in a way that “exceeded the limits” of everyone’s patience. His mother, he said, took him to the bathroom and showed him “what Eastern European discipline was really all about.”

When it was over, he said, she told him, “And if you cry, we’re going to come back in here and do this again.”

The younger Mr. Trump — whose fiancée, the former Fox News personality Kimberly Guilfoyle, sat across the aisle from him — told another story about his sister Ivanka destroying a very pricey chandelier while playing in the house with a beach ball. “Ivanka managed to quickly convince my mother that it was me,” he said.

That time, the “remedy,” as he put it, was a “wooden spoon,” and what made his mother even more irate as she spanked him was his fervent denial of having played any role in the misbehavior. “Not only had I broken the chandelier, but now I was also lying to her,” he said.

But by the time she realized he was telling the truth, Mr. Trump said, she was “too tired to deal with Ivanka.”

Ivanka Trump, 40, also spoke. Her mother “hated funerals,” she said, tearing up as she talked about the “trailblazer, admired by men and women alike” for her “grace and her beauty,” but also her business prowess and relentless work ethic.

She was also the sort of mother who teased her daughter for leaving a party in St.-Tropez at 1 a.m. (“She had stayed till 4”) and chided her for wearing clothes that were too modest. “My miniskirts weren’t mini enough,” she said. (Ms. Trump wore a black dress and pearls to her mother’s funeral.) Ivana’s motto, her daughter said, was “flaunt them while you’ve got them.”

“She taught me to study hard, to work hard, to comport myself with dignity and good manners and to never, ever marry a man with a bad back,” Ms. Trump said. “It took me years to understand the last one.” (Of her daughter’s marriage to Jared Kushner, Ms. Trump said, her mother had declared that “Ivanka must really love him if she’s willing to give up lobster.”)

“Now, she’s watching us from above, telling us to dry our eyes, have a good time and dance one more song for her,” Ms. Trump said. “Mom, I love you today, every day.”

The crowd was Park Avenue and fashion-industry-adjacent, though Whitney Robinson, a former editor of Elle Decor who had become friendly with the elder Ms. Trump in recent years, was in the back and said he had “no idea” who most of the people there were.

But they did include Paolo Zampolli, the former modeling agent whom Mr. Trump appointed to the board of trustees at the John F. Kennedy Center for the Performing Arts; Dennis Basso, the fashion designer whose high-oomph fur designs Ms. Trump favored; Couri Hay, the publicist and gossip columnist; and Jeanine Pirro, the right-wing newscaster.

Near the lectern was a poster board of Ms. Trump on the cover of Vanity Fair in 1992, above the headline “Ivana Be a Star.” One of the speakers would later name all the other magazines whose covers she had graced, among them Town & Country and Vogue. But Ms. Trump was living an increasingly solitary life in her final years, according to Marc Bouwer, a designer who dressed her for many years and who was also seated toward the back, wearing a black suit, no shirt and a sparkly costume jewelry necklace that he thought Ms. Trump would have liked; she was an unapologetic proponent of pairing fake jewelry with super-expensive clothing.

“She had been isolated,” Mr. Bouwer continued, in a brief interview at the church. “There was a lot of pain, a lot of sadness,” he said, before declining to elaborate on it.

Dorothy Curry, the former nanny to Ivanka, Donald Jr. and Eric, was perhaps the most striking speaker. In her two-minute speech, she alluded to that isolation, talking about how she had been close to Ms. Trump through the spring and summer of her life, after which followed an autumn and “inevitable winter” of “roses dying” as her former employer’s field of dreams became a “sinking swamp” of “parasites” who had kept her “afloat” with “illicit dreams and schemes.”

“Ivana, we have reached out to you many, many times, but obviously we didn’t reach out far enough,” she said. “We all basically let go and let God, and now you are totally in God’s hands.”

Mr. Basso, instead, described the good years. He recalled meeting Ms. Trump in September 1983, when he showed his first collection at the Regency Hotel and she went backstage afterward to meet him.

“She’s standing there in chocolate brown Gucci,” he said, “and she said: ‘I like you. You’re cute. You’re chubby, but we can fix that.’”

The following day, he said, she arrived at his showroom for an appointment and walked out with an order for seven pieces, along with an order to “send the bill to the Donald.”

She was, Mr. Basso and others said, a businesswoman who played an instrumental role decorating the hotels and residential buildings her former husband had worked on, among them Trump Tower, the Plaza Hotel and the Taj Mahal in Atlantic City. And when he ran for president, she was a full-throated supporter.

Ms. Trump had shared her ex-husband’s hunger for attention, and it wasn’t easy, others said in interviews, when her celebrity faded and his reignited, first with the television show “The Apprentice” and then when he became a successful presidential candidate. The adult children she had largely raised became appendages for him.

Nearly two hours after the funeral began, pallbearers carried the coffin outside to a recessional performed by Christopher Macchio, who also sang at the Republican National Convention when the former president accepted his party’s nomination in 2020. Mr. Trump and his current wife, Melania, trailed behind the body, followed by Ivanka, Eric and Don Jr.

The coffin was placed in a black hearse bearing the name of Frank E. Campbell Funeral Home, the place of near-rest for many members of New York’s elite. It was headed next to her ex-husband’s golf course in Bedminster, N.J., where ground was consecrated so Ms. Trump could have a traditional Catholic burial.

It was, in a way, the former couple’s final joint real-estate deal.