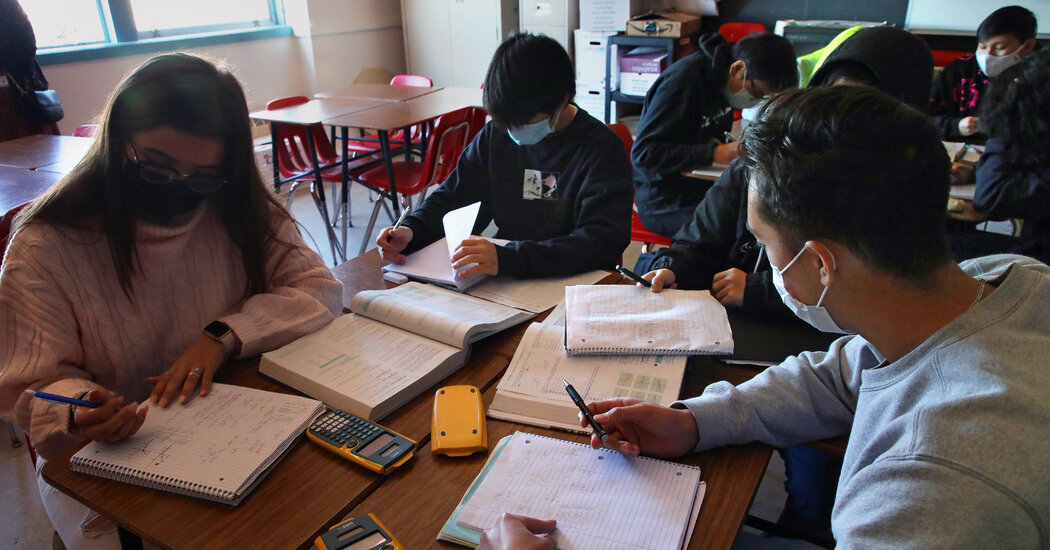 WASHINGTON — The Centers for Disease Control and Prevention said on Friday that unvaccinated students exposed to the coronavirus can remain in school, as long as they are tested for the virus twice in the week after and both tests come back negative.

The new guidance, known as the “test-to-stay” protocol, could ease the burden on children who have been expected to stay home if a close contact tested positive for the virus, and on parents who have had to scramble to retrieve them from school or find day care. It also aims to minimize disruptions to learning as two highly contagious variants of the virus spread across the country, causing some school closures and threatening to upend the strategies that federal and state officials adopted to return to in-person classes in the fall.

Although some schools and districts are already using the test-to-stay approach, the C.D.C. had not previously endorsed it, citing a lack of evidence. On Friday, the agency released studies from two counties, one in California and the other in Illinois, that effectively tested the protocol and found that it worked.

The studies were conducted before the fast-moving Omicron variant began spreading in the United States. Scientists are still investigating many basic questions about the variant, including whether it increases the risk of in-school transmission.

The new policy, hinted at in the winter Covid-19 plan that President Biden unveiled this month, still calls on students to wear masks and socially distance, and applies only to those who remain asymptomatic. Until now, unvaccinated students were expected to quarantine at home for as long as two weeks after exposure. Some states have had tens of thousands of students in quarantine.

“While over 99 percent of schools are open now, we need to make sure we keep that throughout the winter,” Mr. Biden said as he announced the plan. “We want our children in school.”

Vaccinated students with exposures have generally been allowed to remain in school as long as they are asymptomatic and wear a mask. Dr. Rochelle P. Walensky, the C.D.C. director, said at a news conference on Friday that students participating in test-to-stay programs should be tested at least twice during the seven-day period after an exposure.

In one of the studies the C.D.C. released on Friday, students at schools in Los Angeles County that did not participate in a pilot test-to-stay program, and who had to quarantine, lost an estimated 92,455 in-person school days from Sept. 20 to Oct. 31. In schools participating in the pilot, students exposed to the virus lost no days. Those schools also did not see increases in virus rates among students.

In Lake County, Illinois, where the other study took place, researchers estimated that up to 8,152 in-person learning days were saved from August to October in schools that participated in the program. Of the 16 students in the program who tested positive for the virus in the two weeks after exposure, none appeared to transmit it to others at school, the report said.

Dr. Walensky said on Friday that the protocol was “now proven.” She added that because “test to stay” had only been studied in schools, the C.D.C. did not yet have evidence about its effectiveness in other settings.

Other studies have suggested the test-to-stay approach can be safe. One randomized controlled trial included more than 150 schools in Britain, and found that case rates were not significantly higher at schools that allowed close contacts of infected students or staff members to remain in class with daily testing than at those that required at-home quarantines.

Public health experts cheered the C.D.C.’s endorsement, saying it struck the right balance between keeping children safe and allowing them to continue with in-person learning.

“The test-to-stay programs are really good at balancing the costs and benefits,” said Zoe M. McLaren, a health policy expert at the School of Public Policy at the University of Maryland, Baltimore County.

Research suggests that the risk of in-school transmission is relatively low when schools take a variety of precautions, including requiring masks and improving ventilation. But that research, like the two studies the C.D.C. released on Friday, was conducted before the Omicron variant emerged.

Still, strategies for protecting children without shutting down schools or classrooms are needed, Dr. McLaren said.

“As the pandemic continues to morph, we need to think really carefully about how we’re using the long quarantines,” she said. “And quarantining kids that have a low risk of exposure or a low risk of transmission — we really need to think about the trade offs that are involved there.”

While many parents have been clamoring for schools to adopt test-to-stay programs, others, especially those with children who are at higher risk for serious illness, have been nervous about allowing exposed students to remain in class. And some school nurses, who are often tasked with administering the tests to students in test-to-stay programs, have found the workload overwhelming, especially when cases or exposures are high.