Elijah Wood on ‘The Lord of the Rings’ at 20 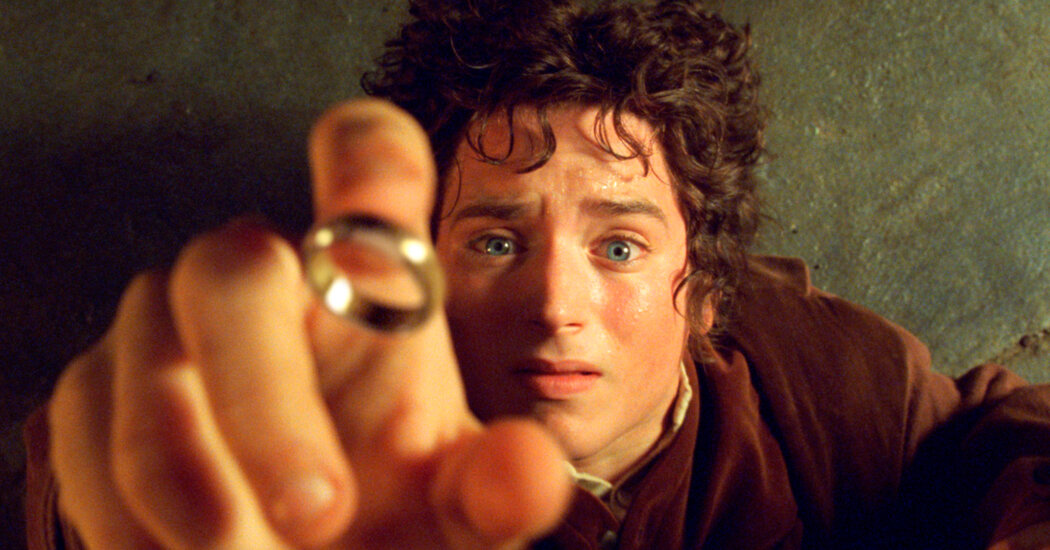 For more than two decades, the actor Elijah Wood has kept a pair of hairy hobbit feet in the same box they were given to him in.

That was just after principal photography on Peter Jackson’s “The Lord of the Rings” trilogy wrapped in New Zealand, and he can’t recall whether the feet are a fresh set or what he wore onscreen as Frodo, the valiant hero of short stature entrusted with destroying a malevolent golden band.

“I’m sure over time they will degrade, because I don’t think latex lasts forever,” Wood said by phone from Los Angeles. “But they were in good shape the last time I looked at them.”

The odd keepsake remains a tangible reminder of the unusual production in which the three fantasy epics, adapted from the J.R.R. Tolkien novels, were shot back to back for 16 months, followed by three years of occasional pickup shots and fall publicity tours.

A semblance of finality only came in 2004, when the third installment, “The Return of the King,” swept at the Academy Awards, winning 11 trophies, including best picture.

Explore the World of the ‘Lord of the Rings’

The literary universe built by J.R.R. Tolkien, adapted into a popular film series in the early 2000s, inspired generations of readers and viewers.

It wasn’t the trilogy’s first brush with Oscar. The first chapter, “The Fellowship of the Ring,” which was recently added to the Library of Congress’s National Film Registry, won four statuettes after its release on Dec. 19, 2001. Twenty years on, Wood, now 40, reminisced about the monumental filmmaking adventure. Below are edited excerpts from the conversation.

When you think about the “Lord of the Rings” films and how they redefined your career, what are the memories that remain most vivid for you?

Often what I think about is the in-between moments, not just the incredible set pieces with hundreds of extras in orc outfits, which is certainly an extraordinary thing, but the seemingly mundane moments, like getting our hobbit feet taken off because we had to vacate set as it started to snow. We’re sitting at the hotel on top of a washer and dryer, getting our feet taken off with a glass of whiskey. Or taking surf trips on weekends with the other hobbits and Orlando [Bloom, who played the elf Legolas] and the camaraderie and the daily life that we had. We all left the variety of places that we came from and made our lives in New Zealand with each other. Twenty years on we are still connected in that way, even if we haven’t seen each other in a long time.

At what point did you feel that this episode in your life had concluded? How difficult was it to leave behind such a transformative feat?

The most profound moment of feeling like I was stepping away from it and questioning what I was going to do next came after principal photography. That was when all of us were at our most exhausted. We had been intensely invested in the world of the movie we were making, and then suddenly we weren’t, which is often the case when you make a film: You’re in that microcosm, and then you’re thrust at the other end of it. And then you’re back in your reality. It was that experience multiplied by a great degree. My experience of living was so defined by being in New Zealand with this group of people that the sudden shift of being home again felt very abrupt. I just wanted to continue to work on things that were really small and very different from “The Lord of the Rings.” I felt quite sad to see it all come to an end, but also ready to move on with my life and have new experiences.

Close fraternal relationships between men like the one Frodo and Sam have in the trilogy are more common now in media. What were your thoughts about this friendship between these two characters back then?

My read on it was just about an incredible companionship. Whilst my character of Frodo is seen as this hero, there’s even more true heroism in Sam [the hobbit played by Sean Astin] and the way he picks up the pieces of where Frodo can’t go on any further. Those two need each other, and certainly Frodo needs Sam. There was a true understanding of that. When I met Sean for the first time, we were both scheduled to get our wig fitted at a hotel in L.A. I immediately gave him a hug and I just said, “Hey!” because I knew who he was. We hugged each other because we knew that we were about to go on this incredible journey together, both as actors with other actors, but also there was that intuition of, “You and I are going to have this journey together as well.” That was extremely true. So much of what we see in the film, both in our relationship and others, is reflective of the reality of what we were experiencing. The power of storytelling is in our own relatability to what is being expressed. I’ve heard many different takes on Sam and Frodo from the L.G.B.T.Q. community, but also people who’ve had struggles with addiction connecting with Gollum.

Frodo is a rather vulnerable creature with an unimaginable burden on his shoulders. What did you learn from embodying him for so long?

One of the great messages of the books as it pertains to Frodo and the hobbits in general is a sense that even the smallest person, not just in stature but in terms of what one feels they’re capable of doing, is capable of greatness, of affecting real change, of having real impact. What Frodo was up against seemed insurmountable, and yet he was able to accomplish it largely because of goodness, kindness, a purity of heart and perhaps innocence. Those are the things that hobbits embody, and inherently why they’re able to withstand the corruption of the Ring for longer than humans. But what makes Frodo unique is a way of seeing the world without any kind of cynicism. There’s also courage, maybe even a blind courage, of not necessarily knowing what’s ahead and therefore not allowing himself to be afraid. If I’m to learn one thing from all of that, it’s that there’s fortitude in his outlook that makes it all possible.

Do you think these movies could be made today the way they were back then?

There was a great sense of a lack of oversight. Peter and the larger team were allowed to make the movies the way that they wanted to make them without much outside perspective. That doesn’t mean the studio wasn’t afraid or invested. They knew the risk of making these films back to back. I don’t know if he would be able to make them in the same way now. Look, the internet’s different too. There was less scrutiny on the films. There was less known about them. We were able to make the movies in a bubble. We had quaint problems, like there would be some photographers up on a hill, but it was pretty minor. [Laughs.] I don’t know if that would be possible now. Now the world is online and there’s a great deal of access afforded to pretty much anybody about anything.

Has perpetually being associated with “The Lord of the Rings” ever been overwhelming?

I accepted a long time ago that I would forever be linked to Frodo, so it doesn’t bother me. Honestly, it would be such a sad burden if it did. [Laughs.] I’m so used to people on the street calling me Frodo and not calling me by my name. It’s representative of one of the greatest experiences of my life, movies that I adore and memories that I’ll cherish forever. At the end of my days, that is what I will be linked to probably more than anything else. I can only equate it to similar scenarios like Mark Hamill or Harrison Ford. They are associated with their classic [“Star Wars”] characters more than others. Now that we’re standing on the precipice of 20 years, which is so difficult to comprehend, my reflection is one of such gratitude and such love that I’ll never be upset at being associated with those films or for them being the largest in people’s memories of who I am.