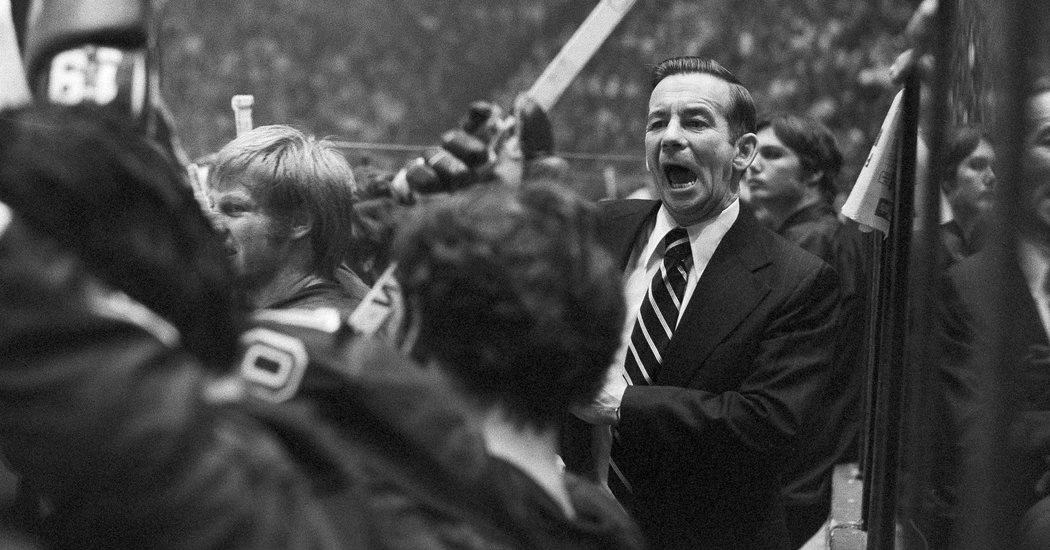 Emile Francis, a battle-scarred goaltender who played sparingly for lowly Rangers teams before rebuilding the franchise as its coach and general manager in a Hall of Fame hockey career spanning half a century, died on Saturday. He was 95.

The Rangers announced his death. The team did not say where Francis died, but he had been living in South Florida.

When he played junior hockey in Saskatchewan, Francis was known as the Cat for his quick reflexes in goal. But he played in only 95 National Hockey League games, with the Chicago Black Hawks and the Rangers. He found his niche behind the bench and in the front office, with the Rangers, the St. Louis Blues and the Hartford Whalers.

He was virtually a one-man operation with the Rangers as their general manager from 1964 to 1976 and their coach for most of that time. He set Ranger coaching records that still stand for most games (654) and most victories (342). His career winning percentage (.602) was bested only by Mike Keenan, who posted a .667 mark in his only season with the Rangers, when he coached them to the 1994 Stanley Cup championship.

Francis was also an innovator in the design of goalies’ equipment.

Having played baseball as a teenager, he took a first baseman’s mitt — a model endorsed by the Yankees’ George McQuinn — and attached a hockey-style cuff to it. He first wielded it in goal while in junior hockey and then introduced it to the N.H.L. with the Black Hawks. It snared pucks more easily than the goalies’ customary glove, a regular five-finger hockey model with a small amount of padding, and goalies around the league were soon copying his creation.

“The gloves were on the market within a month,” he told NHL.com in a 2016 interview, recalling how manufacturers, including Rawlings, had been able to sell them under their brand name ever since. “I didn’t have a patent because I didn’t even know what a patent was.”

Francis was inducted into the Hockey Hall of Fame as a “builder” of the game in 1982 and received the Lester Patrick Trophy that year for contributions to hockey in the United States.

Francis coached stars like the goalie Eddie Giacomin, the forwards Jean Ratelle and Rod Gilbert, and the defenseman Brad Park. When he was behind the bench for all or part of nine consecutive seasons, his teams had winning regular-season records and always made the playoffs. But his only run to the Stanley Cup finals as the Rangers’ coach came in 1972, when the team lost to the Boston Bruins, four games to two.

A wiry 5-foot-6 and 145 pounds or so, Francis was an intense figure pacing behind the Rangers’ bench, two L-shaped scars on his chin from his goalie days attesting to his toughness. In 19 seasons playing in junior hockey, the minor leagues and the N.H.L., he had broken his nose many times, taken more than 200 stitches and lost numerous teeth. So he had no hesitation about haranguing his Rangers when he felt they weren’t playing smart, aggressive hockey. A plaque he posted in their locker room read, “We Supply Everything but Guts.”

“Ninety percent of winning is desire,” he told The New York Times in 1967. “You have to keep pushing, pushing to create desire, to make some guys realize the importance of each game.”

Emile Percy Francis was born on Sept. 13, 1926, in North Battleford, Saskatchewan. His father died when he was 8. His mother, Yvonne Francis, maintained the household during the Depression, and an uncle who played for a senior hockey team taught young Emile the game.

As Francis told it, he got his nickname in the 1945-46 season, when a sportswriter impressed by his play in goal for the Moose Jaw Canucks of the Saskatchewan Junior Hockey League wrote that he was “quick as a cat.”

Francis joined the N.H.L.’s Black Hawks midway through the 1946-47 season and played in 73 games with them over two seasons.

He was traded to the Rangers in October 1948, but appeared in only 22 games over the next four seasons as a fill-in for Chuck Rayner, their future Hall of Fame goalie. He spent most of those seasons playing for the New Haven and Cincinnati teams of the American Hockey League, then returned to the minors for good, retiring after the 1959-60 season.

After coaching in the Rangers’ minor league organization, Francis was named their assistant general manager in 1962 and general manager in October 1964. He took over a franchise that had not won a Stanley Cup championship since 1940 and had not finished first in a six-team league since 1942.

Francis’ first two Ranger teams missed the playoffs. But his feistiness was on display early in the 1965 season in a game against the Detroit Red Wings at Madison Square Garden, when he charged from his seat to berate a goal judge who had signaled that a puck had gone past Giacomin for a score. Francis got into a fight with a fan sitting near the goal judge, and at least eight Rangers players climbed into the stands to defend him.

Two weeks later, Francis fired his coach, Red Sullivan. Moving behind the bench, he brought some order to a seemingly chaotic on-ice presence, establishing patterns for his skaters to follow.

“This is the first time we’ve had a system where we know where the other player is on the ice,” Harry Howell, the longtime Ranger defenseman, told The Times during the 1967-68 season.

While remaining general manager, Francis gave up the coaching duties three times — to Bernie Geoffrion in 1968, Larry Popein in 1973 and Ron Stewart in 1975 — but he was behind the bench for all or part of 10 seasons, posting an overall record of 342-209-103.

Francis incurred the wrath of Ranger fans when he released Giacomin, a huge fan favorite, on Oct. 31, 1975. The Detroit Red Wings claimed him, and he played for them at the Garden two nights later, inspiring fans to chant “Kill the Cat.”

Giacomin was replaced by John Davidson in goal. A week later, in a swapping of All-Stars, Francis traded Park and Ratelle to the Bruins in a multiplayer deal for the center Phil Esposito and the defenseman Carol Vadnais.

Francis was fired as general manager in January 1976 and replaced with John Ferguson, a former wing for the Canadiens. Ferguson also took over as coach, replacing Stewart.

Francis became the general manager and coach of the St. Louis Blues in the 1976-77 season, when he took them to a first-place divisional finish, and he remained with the organization until 1983. He was a senior executive with the Whalers (now the Carolina Hurricanes) from 1983 to 1993; the team made the playoffs during most of his tenure.

His survivors include his sons, Bobby, who coached the N.H.L.’s Phoenix (now Arizona) Coyotes for five seasons and received the Jack Adams Award as the league’s leading coach in 2002, and Rick, a former vice president of marketing and sales with the Whalers, as well as three grandchildren and a great-grandchild. His wife, Emma, died in 2020.

In 1966, Francis formed the Metropolitan Junior Hockey League, giving children the opportunity to play ice hockey. The future Rangers Nick Fotiu and Brian Mullen were among those involved in the program. In 2008, the Rangers created the Emile Francis Award, given to supporters of youth hockey.

When Francis took control of the Rangers, he wanted players known for their toughness.

He coaxed Geoffrion, the former Montreal Canadiens star, out of retirement to play two seasons for the Rangers before his coaching stint with them. As Geoffrion put it in a Times interview in March 1967, Francis ensured that the Rangers no longer had an “inferiority complex.”

Gilbert, the high-scoring wing, marveled at how Francis might lose his temper behind the bench but always remained in control.

As he put it, “I’ve seen Emile change lines while he’s fighting.”