For Texas Southern and other HBCUs, It’s Proving Time Again 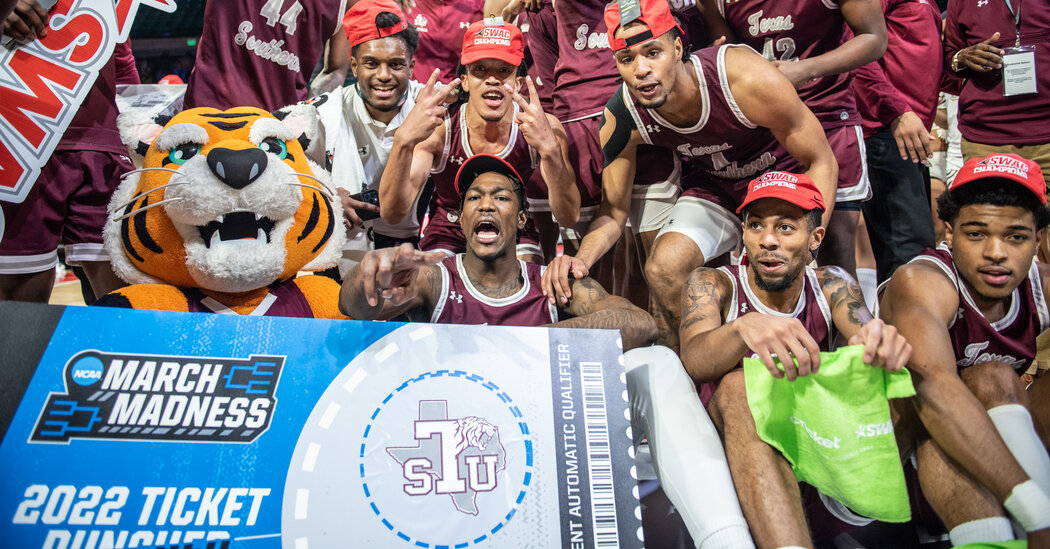 BIRMINGHAM, Ala. — Finally, a taut game began to turn in Texas Southern’s favor. An automatic bid to the N.C.A.A. basketball tournament was within reach. An assistant coach knelt at the Texas Southern bench as if to start a decisive sprint to the finish line. Players jumped to their feet, waving towels the way trainers cool boxers between rounds.

The knockout punch came on a 17-2 run that sent Texas Southern to an eventual 87-62 victory over top-seeded Alcorn State on Saturday in the championship game of the Southwestern Athletic Conference tournament.

The Tigers hugged and posed for photographs and climbed a ladder to cut down the nets. Josh White, a Texas Southern assistant, had clapped so hard during the pivotal stretch that he said, “My hands feel like they’re on fire.”

Yet the reward for this stirring intensity, for this sixth title in the last eight S.W.A.C. tournaments, was underwhelming. Texas Southern (18-12), a historically Black university located in Houston, was given a No. 16 seed and relegated yet again to the First Four, or play-in round, of the men’s N.C.A.A. tournament. The Tigers will face Texas A&M-Corpus Christi, also a No. 16 seed, on Tuesday in Dayton, Ohio.

In effect, Texas Southern is in the 68-team field, but not fully in, and still has to prove that it belongs. Continued frustration has led to much discussion about how teams from historically Black colleges and universities can enhance their access, visibility and success in an era of more questioning about racial bias.

“Disappointed, that’s a perfect word, but it gives us an opportunity to let everybody know we’re not flukes and we deserve to be” in the main 64-team bracket, said John Jones, a graduate guard for Texas Southern whose father, Johnny, is the team’s head coach.

Norfolk State repeated as tournament champion of the Mid-Eastern Athletic Conference, the other H.B.C.U. league in Division I, but its compensation for a 24-6 record was a No. 16 seed in the main tournament bracket and an opening game against Baylor, a No. 1 seed and the defending national champion.

Robert Jones, the Norfolk State coach, said that a No. 16 seed was “nonsense.” “I feel disrespected, honestly,” he told reporters on Sunday.

In 1997, 2001 and 2012, M.E.A.C. teams seeded 15th ousted No. 2 seeds in some of the greatest upsets in the men’s N.C.A.A. tournament. Yet H.B.C.U.s have for decades faced barriers to broad participation and advancement in the most widely popular competition in collegiate sports.

“Some people look at equality and say, we have a seat at the table,” said J. Kenyatta Cavil, a professor at Texas Southern and an expert on H.B.C.U. sports. “But is that equitable as far as leveling the playing field?”

A team from the S.W.A.C. or M.E.A.C. — and several times both — has been placed in the play-in round of the N.C.A.A. men’s tournament in 21 of the past 22 seasons. This reflects, in part, the impact of the dual mission of basketball players at H.B.C.U.s, who are also fund-raisers tasked with supplementing some of the smallest athletic budgets in Division 1.

Many H.B.C.U.s play most or all of their nonconference games on the road, often participating in so-called “buy” games. Schools earn roughly $75,000 to $100,000 per game to play teams in higher-rated conferences, in essence trading fierce competition and frequent defeat for paychecks. Texas Southern opened the season with seven consecutive road defeats and did not play at home until Jan. 8. The Tigers had to scramble through their conference schedule to breach .500 for the season.

This avalanche of early-season defeat helps explain why the S.W.A.C. and M.E.A.C. receive only one bid apiece to the N.C.A.A. tournament. Their teams are disproportionately placed in the play-in round or seeded 16th in a region against a No. 1 seed, where the chances of advancing are remote.

Charles McClelland, commissioner of the S.W.A.C. and a member of the N.C.A.A. Division I basketball committee, told HBCU.com last year that the current selection system was fair, saying, “It comes down to a philosophy within the Black colleges. Are you going to go out and get all of the money? Or are you going to try to put together a schedule that will allow winning?”

Norfolk State won 24 of 30 games this season, but its scheduling strategy did not elevate the Spartans’ seeding. A game against Loyola-Chicago, a recent postseason power, was canceled because of Covid. Of the teams Norfolk State played this season, none reached the N.C.A.A. tournament.

The seeding “sends a message that should have been sent a long time ago: Don’t underestimate H.B.C.U.s,” Jackson State forward LaMiracle Sims said.

So how to further elevate the standing of H.B.C.U.s? Felecia M. Nave, the president of Alcorn State, proposed that all conference tournament champions be placed into the main tournament bracket, with only at-large teams placed into the First Four.

Jones, the Texas Southern coach, said he would support that change, noting that conference tournament champions “have won their way in; they aren’t voted on by a committee.”

There are some advantages to the play-in round: facing a similarly seeded opponent, playing before a national television audience with no competition from other games and having a chance to collect an additional payout from the N.C.A.A. basketball fund with a victory.

In 2018, Texas Southern was victorious in the First Four and became the first team with a losing record to win an N.C.A.A. tournament game. In 2021, the Tigers won again in the play-in round.

But being placed in the main bracket from the start confers “a certain level of respect for the S.W.A.C. and the M.E.A.C.,” John Jones, the Texas Southern guard, said.

Coach Jones said he believed Texas Southern deserved to be placed in the main bracket and seeded higher than 16th, considering that it defeated Florida, then ranked 20th, during the regular season.

He said it would be financially onerous for Texas Southern and many S.W.A.C. teams to play fewer “buy” games. “You don’t have a choice,” Jones said. “That’s how we fund our programs.”

To boost its roster, Texas Southern has taken advantage of a transfer rule that now allows players to switch schools once and play immediately instead of sitting out a year, creating a kind of free agency.

All of the Tigers’ top players are transfers, including forward Brison Gresham, who played in the Final Four last season with the University of Houston. “I’ve been through enough wars to know that conference doesn’t matter,” Gresham said. “When people look at the S.W.A.C. and think the level of play is low, that’s disrespect. It has a lot of tough players.”

The conference has also begun hiring high-profile coaches. Jackson State, which hired the Hall of Fame defensive back Deion Sanders to coach football, last week hired Mo Williams, who played 13 seasons in the N.B.A., to coach men’s basketball. Cynthia Cooper-Dyke, the women’s coach at Texas Southern, won four titles as a player in the W.N.B.A.

The stereotypical narrative for S.W.A.C. schools has been that teams will be seeded 15th or 16th in the N.C.A.A. tournament and “should be happy to be there,” said Nathaniel Bell, an assistant coach for the Arkansas-Pine Bluff women’s team. “But we’re up for the challenge. What happens if we can change that story line?”