How Married ‘Bachelor’ Couples Make It Work. Yes, Some Are Still Together. 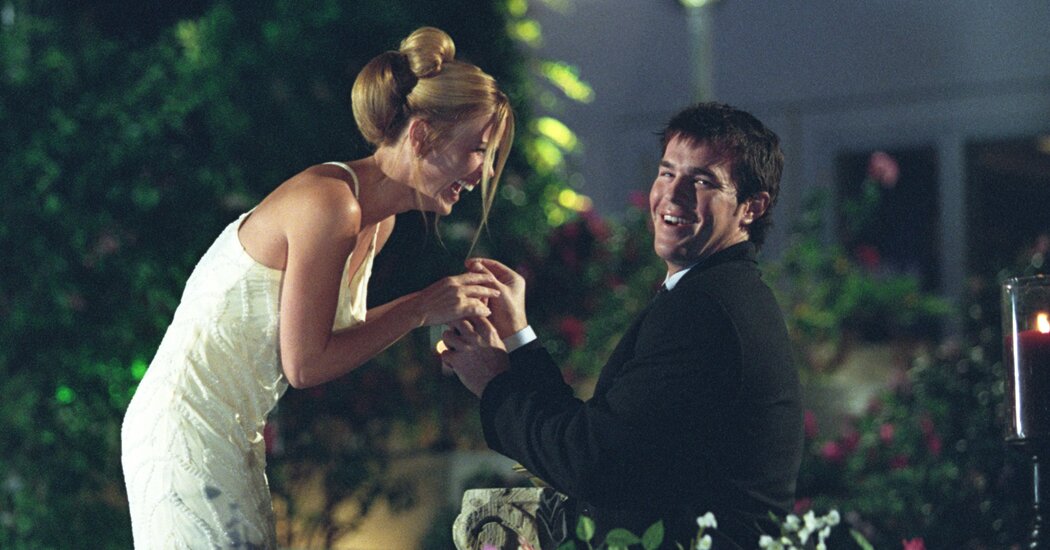 In the latest season of “The Bachelor,” Clayton Echard, the show’s 26th lead, said after a late-night rendezvous with a hopeful suitress, “If I ever need validation to know that this process works, I’m seeing it unfold before me.”

But according to the numbers, perhaps unsurprisingly, that “process” — a weeks-long mass courtship in front of cameras that is meant to end with a proposal and, presumably, a marriage — is not very effective at yielding long-term relationships.

Since the “The Bachelor” debuted on ABC in March 2002 and “The Bachelorette” the following year, only six couples who met on those shows are currently married. A seventh is expected to wed in May. In this time, there have been 34 televised proposals in 44 seasons combined. Taking into account those who met on other spinoffs, the number of currently married couples jumps from six to 10. (Representatives from Warner Bros and ABC declined to comment for this article.)

As the franchise enters its 20th year, what can be gleaned from some of those still-wed couples’ most dramatic story lines ever? Below, five of the six who met on “The Bachelor” and “The Bachelorette” discuss how they’ve made it work since meeting on set. (The sixth couple, Rachel Lindsay and Bryan Abasolo, declined to comment for this article.)

The Lowes met on season 17 of “The Bachelor,” which aired in 2013 and ended with Mr. Lowe’s on-camera proposal in Thailand. They were married the following year.

The couple, who live in Dallas with their two sons, ages 5 and 3, and daughter, 2, have since built a life around what Ms. Lowe called “super chill” family traditions, including making homemade pizza.

“Our happy place is at home with our kids,” said Ms. Lowe, 35, who runs a local gifting service and, with her husband, started a namesake furniture line, Home by Sean & Catherine Lowe.

Mr. Lowe, 38, said that when people ask him how he found love on “The Bachelor,” his response is always the same. “I liken it to meeting 25 strangers on a dating app — you might connect with one of them,” he said.

But “then you have to enter the real world, and it takes work,” he added.

That he and Ms. Lowe, or any couple who married after meeting on the show, have managed to stay together still strikes him as somewhat improbable. “When you have girls racing in bikinis while driving lawn mowers it’s silly,” he said. “All the elements go against creating a long-term relationship.”

Ms. Lowe, however, said she left the show feeling wiser about how to form a successful partnership. The accelerated courtship the contestants experience made her realize the importance of focusing on “non-negotiables” at the start of any romance, instead of worrying about “things that don’t matter, like leaving the toilet seat up.”

She added that meeting Mr. Lowe on set with other people around helped her get a better understanding of his character, recalling a moment when she saw him speaking to the crew and “noticed that he knew everybody’s name.”

“I took that as such an insight into who he really was when the cameras were down,” Ms. Lowe said.

Mr. Mesnick, the lead on “The Bachelor” season 13, which aired in 2009, stunned fans when he called off his engagement to Melissa Rycroft six weeks after proposing on air, and later proposed (off air) to his future wife, who was that season’s runner-up.

“I think the challenge is that the public looks at that as a real engagement,” Mr. Mesnick, 45, said of the series’ televised proposals, which he considers more of a commitment to “see what happens over the next several months or a year or whatever.”

Before the Mesnicks wed in 2010, they went through a bit of a get-to-know-you-again period, said Ms. Mesnick, 38.

“You need to start over at square one and get to know each other,” she said, echoing Mr. Lowe’s sentiments that cast members do not behave on set as they would in real life. “They’re literally getting to know a totally different person when there’s not a camera or producer in your face.”

On the show, Ms. Mesnick said, “I was really calm,” but in real life, “I’m very Type A and kind of crazy.” Mr. Mesnick, on the other hand, is “super go-with-the-flow.”

“I think it’s taken us 10-to-12 years to finally get into a really good, easy groove on how to function in life,” Ms. Mesnick added.

The Mesnicks, who live in Seattle, now say their contrasting personalities not only provide equilibrium in their relationship, but also in their work as brokers co-leading a real estate team in Kirkland, Wash. “She does the marketing, and I do face-to-face with our clients,” said Mr. Mesnick.

When they met, Mr. Mesnick was a divorced father of one. Moving in with him and his then 4-year-old son in 2009, Ms. Mesnick said, at first “rocked their world.” But she and her stepson, now 17, eventually became “thick as thieves.”

The couple, who have a 9-year-old daughter, say open and honest communication has been essential to making their relationship last. Ms. Mesnick said it has also helped that they got together before picking apart relationships from “The Bachelor” became a sport of sorts on social media.

“It would have been brutal,” she added of the backlash they might have received when she and Mr. Mesnick got back together after he broke off his engagement with Ms. Rycroft.

As two people who initially didn’t want to be on TV — Ms. Siegfried said she applied for “The Bachelorette” season nine, which aired in 2013, as a “skeptic joke,” and Mr. Siegfried said that friends convinced him to join the cast after he declined an initial offer to participate — neither envisioned the experience would have a fairy-tale ending.

But Ms. Siegfried, 35, a fashion designer and the founder of Desiree Hartsock Bridal, said that “really natural” chemistry paved the way for them to fall in love on set.

Mr. Siegfried, 36, a loan officer, said “she was definitely someone I would pursue outside of television.”

“Our conversation was easy,” he added. “And when we were talking, she knew what she wanted and was looking for in someone, and that was important to me.”

After filming their on-camera engagement, Ms. Siegfried, who was living in Los Angeles and said she was “broke as could be,” relocated to Seattle, where she and Mr. Siegfried, who had moved there in 2011, started living in a new home together.

“It would be hard for one person to dive into someone else’s life across state lines,” she said. “It was nice to start afresh together.”

They married in 2015 and now live in Portland, Ore., with two sons, 3 and 5. Though the couple has no plans to appear on television again, watching it remains a beloved pastime, said Ms. Siegfried. Recently, their favorite shows include “Yellowstone” and “1883,” she said.

Their relationship also benefits from spur-of-the-moment workday dates. “He’s like, ‘Hey, I have a break. You want to grab lunch?’” Ms. Siegfried said. “It’s fun to have that spontaneous lunchtime.”

Heartfelt compliments, or “words of affirmation” as Mr. Siegfried put it, go a long way, too. “While everyone loves flowers, that’s not necessarily what she’s looking for.”

Mr. Luyendyk, 40, a real-estate agent and racecar driver, initially proposed to Becca Kufrin at the end of “The Bachelor” season 22, which aired in 2018.

But he soon ended their engagement because he couldn’t stop thinking about Ms. Luyendyk, 30, a fashion designer and the founder of the line Shades of Rose. On a live episode filmed after the pre-taped finale aired, Mr. Luyendyk proposed to Ms. Luyendyk in front of a studio audience.

“I want to do this in front of everyone, because I want to show you that I should have done this a long time ago,” he said at the time.

In some ways, the Luyendyks credit their bond’s strength to the backlash they faced after their engagement. “There was a lot of animosity in the room,” Ms. Luyendyk said. “I could see people glaring at me when I walked out.”

“We’ve always said, ‘It’s us against the world,’” she added.

The couple, who live in Scottsdale, Ariz., married in Hawaii in 2019, while Ms. Luyendyk was pregnant with their daughter, now 2. In June 2021, they became a family of five when the couple had twins, a boy and a girl.

Between work and parenthood, they say it has been harder to carve out time for themselves, making their home an ideal venue when they can fit it in. One recent activity: “Goat yoga in the backyard,” Mr. Luyendyk said. “It was messy.”

Their morning coffee ritual is another opportunity to connect. “We love to be up early and have coffee together and make that little time for us before the babies wake up,” he said. Added Ms. Luyendyk, “Some nights, I can’t wait to have coffee in the morning.”

The Sutters wed in December 2003 on a three-part televised special that followed their appearance on “The Bachelorette” season one, which aired earlier that year. They now live with their son, 14, and daughter, 13, in Vail, Colo., and their 18-year marriage is the longest in the franchise’s history.

Ms. Sutter, 49, who has since written a book and hosted a podcast, was the runner-up on season one of “The Bachelor.” She said that appearing on both shows convinced her you can find love anywhere, including “on national television like we did.”

Mr. Sutter, 47, a firefighter, said that though “there is pressure” for finalists like himself to propose at the end of a season, “I never felt it to the degree that I made any major decisions because of it.”

But, he added, “If I’m being honest, I really didn’t know her as well as I probably should have prior to asking her to marry me.”

Like other couples, acclimating to a regular life together after the show proved trying for the Sutters. Mr. Sutter said that a mental health professional whom he spoke to during the casting process told him that contestants’ lives could be affected for up to three months after their season ended. “She missed the mark by years,” he said.

Making time for in-person conversations is something both have prioritized over the course of their marriage. “Throw your phones in your drawer once you come home from work,” said Ms. Sutter of a tactic they use to eliminate distractions during one-on-one time.

Playing pickleball, taking camping trips with their children and sitting down at a table to eat dinner each day are other activities that enhance their relationship.

While no relationship is always roses and Neil Lane diamond rings, the Sutters say theirs is one that people continue to cite as an example of marital bliss. Over the years, Mr. Sutter said that they have been asked how they make their relationship work “hundreds of times,” and that their reply has evolved along with their marriage.

If they could sum up their answer in a song, Ms. Sutter would point people to “Legends,” Kelsea Ballerini’s 2017 single. “Basically it says no one believed in us, but we did.”