‘I Didn’t Look Like a Human’: Journalist Tells of Myanmar Torture 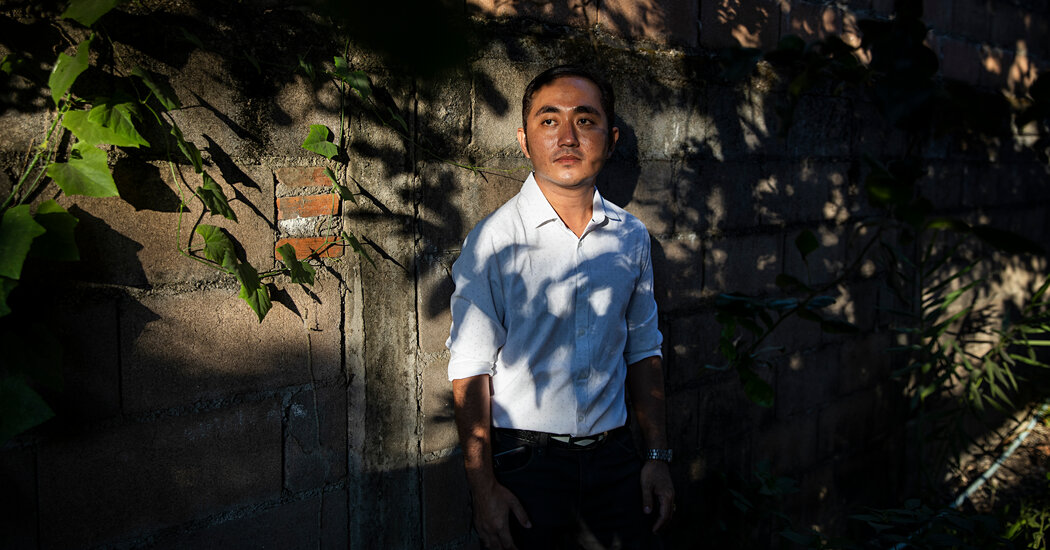 When more than 100 soldiers and police officers surrounded his three-story apartment building and sealed off his neighborhood in Myanmar this March, the journalist Ko Aung Kyaw knew they were coming for him.

So he began livestreaming his arrest in the southern city of Myeik, capturing the soldiers in action as they smashed security cameras outside his apartment and hurled stones at his windows.

As they broke down his door, he erased his cellphone memory to protect his contacts, even though he knew the punishment for this would be swift and severe.

He was taken to an interrogation center where he said soldiers immediately began beating him. Smelling of alcohol, they burned his face and hands with a cigarette, stepped on his fingers and placed plastic bags over his head, nearly suffocating him eight times, he recounted.

His certainty that he was about to die strengthened his resolve not to give up any names.

“In my mind, I was dead,” he said. “Later, when I saw the photo they took, I didn’t recognize myself. My face was swollen and I didn’t look like a human.”

The New York Times could not independently corroborate the specifics of Mr. Aung Kyaw’s treatment, but reports of torture in custody have been widespread since the military seized power in a Feb. 1 coup. Interrogators often try to extract the names of associates, contacts and, in the case of journalists, their sources.

Nearly all of the 11,000 people arrested by the junta in a vicious crackdown have been tortured to some degree, according to the advocacy group, Assistance Association for Political Prisoners. At least 184 have been tortured to death, the group said, including a journalist, Ko Soe Naing, who was arrested on Dec. 10 while covering a protest in Yangon.

Mr. Aung Kyaw, a video journalist for the independent Democratic Voice of Burma, was a prime target. Even before the coup, he had reported extensively on the military’s corruption, its land grabs and its practice of stealing from the public.

Some of his online reports received millions of views. The military was especially angered by his 2019 story that led to the arrest of a close ally of the military, the nationalist monk Ashin Wirathu, for sedition.

Small in stature and sober in demeanor, Mr. Aung Kyaw, 32, has always been one to speak out, often at great risk to himself. “I became a journalist because when I see injustice, I can’t accept it,” he said.

The regime announced in October that it would free 5,600 prisoners, but released only a few hundred. One of them, to his great surprise, was Mr. Aung Kyaw.

Knowing that he was likely to be rearrested, he and his family escaped across the border to Thailand.

By 1989, the year of Mr. Aung Kyaw’s birth, the military had ruled Myanmar for 27 years. His family lived in the little town of Kyaiklat southeast of Yangon, an idyllic spot in the Irrawaddy Delta, where they owned a successful boat rental business and a small sawmill.

His earliest memory is of their house burning down when he was 3. The fire started in the middle of the night in a neighbor’s kitchen and wound up destroying 13 homes.

The local military-appointed administrator, instead of helping the displaced and dispossessed families, responded by seizing the land on which the homes had stood and handing it over to his friends. The families were forced to find housing and jobs elsewhere. Mr. Aung Kyaw calls it “a life lesson.”

As he grew older, he realized that such injustice was common in Myanmar. By 14, he had joined an underground movement to resist military rule.

As a teenager, he began writing articles denouncing the military, and at 19 he opened one of the country’s first internet cafes. It became a gathering place for young activists.

His first arrest came in 2010 for criticizing the regime. He was taken to an interrogation center and questioned around the clock for 11 sleepless days. He said he refused to cooperate.

Convicted of violating the telecommunications law and disseminating information that could harm the military, he was sentenced to 12 years but freed in an amnesty after two.

Around the time of his arrest, the military began relaxing its hold on the country, leading to a proliferation of cellphones, a surge in independent media and the election of civilian leaders who shared power with the military.

In 2015, Mr. Aung Kyaw began working full-time for the Democratic Voice of Burma, or DVB, where one of his roles was helping more than 60 citizen journalists cover their communities. Since the coup, citizen journalists have been essential in reporting on the junta’s brutality.

After marrying in 2018, he moved to Myeik, his wife’s hometown. There, he reported on the military’s theft of fuel from fishermen, its seizure of land from farmers and its involvement in the drug trade.

Understanding the Coup in Myanmar

Ms. Aung San Suu Kyi faces years in prison. On Dec. 6, a court sentenced her to four years in a closed-door trial that the U.N. and foreign governments have described as politically motivated. While this initial sentence has since been reduced to two years, Ms. Aung San Suu Kyi is facing a series of rulings that could keep her locked up for the rest of her life.

On the day of his arrest, he had live-streamed a report on soldiers beating people, including a pregnant woman, and stealing their money. It attracted 2.8 million views.

The authorities came looking for him but he had already left the scene. When they surrounded his apartment building that evening, he was prepared.

He knew his interrogators would view deleting his phone contacts as a provocation that would result in harsher torture. “But it’s my job to protect my news sources,” he said.

When pummeling, burning and suffocating him couldn’t get him to talk, the angry soldiers beat him with a wooden club, striking his face repeatedly. He thought he had lost both eyes. After a soldier kicked him in the head, Mr. Aung Kyaw said he could no longer move. He passed out, bringing his interrogation to an end.

It was weeks before he could walk again.

He attended a video court hearing two days after his arrest. His face bruised and swollen, he told the judge of the torture he had suffered. The judge said it was outside his jurisdiction.

Mr. Aung Kyaw was once again convicted of disseminating information harmful to the military — a charge often brought against journalists — and sentenced to two years.

Given only two thin blankets at Myeik Prison, he slept on the wooden floor in an area so crowded he could lie only on his side. He was put to work with other inmates making false eyelashes for local companies.

Drug dealers, who made up a large majority of the prison population, paid the guards for privileges. In Mr. Aung Kyaw’s cell, the drug dealers beat some protesters and forced all the political prisoners to stay in a small corner. He complained to the prison administration, prompting death threats from drug dealers and guards alike.

Soon after his release, he made plans to flee Myanmar with his wife, their 2-year-old daughter, and his wife’s sister, who also was working as a journalist.

Posing as a family on vacation, they drove toward the town of Myawaddy on the Thai border. Often taking back roads, they passed through dozens of checkpoints, sometimes paying soldiers to let them by.

Eventually, they crossed the Moei River by boat to reach Thailand, carrying all their worldly possessions in a backpack and small suitcase.

Mr. Aung Kyaw’s sense of freedom at crossing into Thailand was soon tempered by the reality of living as an exile in an unfamiliar country. He and his family hope to receive asylum in Europe or Australia.

“I worry because I have no legal documents or the language to communicate,” he said. “But I also have a sense of relief that I am no longer living under the military dictatorship.”