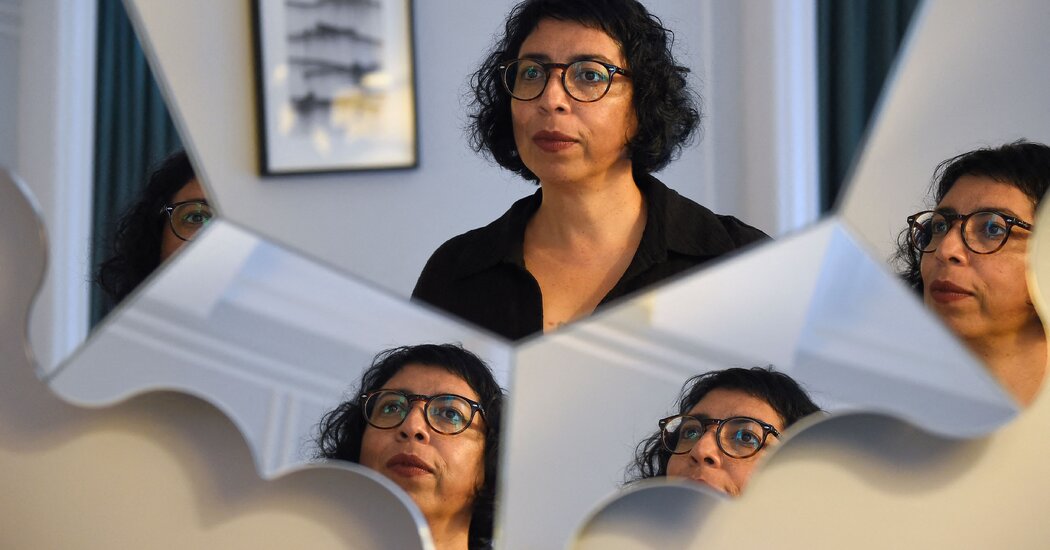 MEXICO CITY — As a young girl growing up in 1980s Mexico, the idea of becoming a filmmaker was almost unthinkable for Fernanda Valadez. Other than a movie club at the local university, there were no cinemas in her hometown, Guanajuato, and films made by women were few and far between.

“The dream of making cinema was something far away,” she recalled recently. “We grew up with the feeling that making films was very difficult.”

Some 30 years later, however, that dream has become very real. Valadez’s debut film, “Identifying Features,” won two top prizes at the Sundance Film Festival in 2020, and this year it won best picture, director and screenplay, among other prizes, at the Ariel Awards, Mexico’s equivalent of the Oscars.

After decades of fighting for recognition in an industry dominated by men, women filmmakers like Valadez are setting Mexican cinema ablaze, not just releasing more work but also gaining the critical success and major awards that were long restricted to their male peers.

In a society where machismo has often held women back and gender-based violence is commonplace, the rise and recognition of female filmmakers reflects a broader social change brought about by both an emboldened feminist movement in Mexico and an urgent conversation about sexism worldwide.

“It’s been years in the making,” Valadez said. “But I’m very happy to be part of a generation of women telling powerful stories.”

Getting here has not been easy, either for Valadez or her fellow filmmakers.

Tatiana Huezo is a Salvadoran-Mexican director, who in 2017 became the first woman to win the directing prize at the Ariels. Her latest film, “Prayers for the Stolen,” which received a special mention at the Cannes Film Festival this year, is Mexico’s candidate for the best international feature Oscar at the 2022 Academy Awards, and last week made it onto the shortlist of finalists for the statuette. If nominated, Huezo would become the first Mexican woman to compete for the award, even as fellow countrymen like Alfonso Cuarón and Guillermo del Toro have dominated the top prizes of late.

When Huezo was a little girl, her mother would sneak her into the cinema to see art-house movies. The director remembers being enchanted and at times frightened by the films of David Lynch and François Truffaut. But when she began studying at Mexico’s Film Training Center, she found herself confronted by sexism.

Huezo had enrolled to become a cinematographer, but once in school, male directors wouldn’t take her on their projects, so she ended up having to both shoot and direct her own.

“They would say that ‘it’s too heavy with the cameras,’” she said.

Valadez encountered similar obstacles at the Film Training Center, where she was one of only four women in a class of 15. She said some female students at film schools were asked inappropriate questions like whether they were going to have children or would they be able to carry equipment.

“We women face more filters,” she said. “Men in these generations are brought up to believe that destiny is in their hands.”

Sexism has long been an issue in Mexican film schools, said Maricarmen de Lara, a feminist filmmaker and professor who was director of the film school at Mexico’s National Autonomous University from 2015 to 2019.

The industry was even worse when she was a young student, with sets ruled by men. “They were men who minimized the work of women, and they did it publicly,” Lara said, adding that a few were violent. “There were some cinematographers who wouldn’t even accept a woman assistant photographer.”

But women have still managed to make films in the country for decades, said Arantxa Luna, the critic and screenwriter, pointing to Adela Sequeyro, who worked as a producer and director in the 1930s, and María Novaro, who along with Lara, was part of the feminist collective Cine Mujer in the 1970s and ’80s.

The legacy of the feminist film movement has been particularly lasting for Mexican documentaries: Between 2010 and 2020 women directed a third of documentaries in the country, compared to just 16 percent of fiction films.

Still, it’s been an uphill battle.

“Fifteen, twenty years ago in Mexico there weren’t that many women directors,” said the documentarian Natalia Almada, who won a 2009 Sundance directing award. “Even just being out in the field as a woman with a camera making films meant something.”

Off-camera, women have had an impact beyond directing. Behind some of Mexico’s most prominent male filmmakers of the last 20 years have also been producers like Bertha Navarro, whose credits include several of Guillermo del Toro’s most acclaimed films, and Mónica Lozano Serrano, who was an associate producer on Alejandro González Iñarritu’s “Amores Perros.” A former president of the Mexican film academy, Lozano has in recent years defended public funding for cinema in Mexico.

Meanwhile, the Hollywood success of Iñarritu, Cuarón and del Toro, nicknamed “the three amigos,” also helped the industry in Mexico, which has seen a surge in attention and money for film. Almada said they “turned a kind of international gaze on Mexico as a place where interesting work is being made.”

The result has been an avalanche of Mexican cinema and a corresponding rise in the number of films made by women. In 2000, “Amores Perros” was one of just 28 Mexican feature films; in 2019, there were more than 200, according to official figures. In 2008, just five films were directed by women, by 2018, that number had increased to 47.

The filmmaking grew as society evolved. An emboldened feminist movement has increasingly taken to the streets in Mexico, demanding an end to gender-based violence, and the #MeToo movement has also emerged.

Valadez said the cultural shift provoked by the #MeToo movement became apparent in the reception to her previous project, “The Darkest Days of Us” (2017), the story of a woman haunted by her sister’s death, directed by Valadez’s producing partner, Astrid Rondero.

“Before #MeToo became viral, when we were still editing, there were comments that the film even felt aggressive toward men,” she said. After the movement exploded, Valadez said, “it began to be understood that it was a film that talked about what #MeToo was putting on the table, the microaggressions, the violence, the abuse.”

The changes started by #MeToo have been felt across the film industry in Mexico. In September, the activist group #YaEsHora (It’s Time), in collaboration with the Boston Center for Latin America and eight Mexican production companies, started the country’s first “comprehensive protocol against harassment,” a series of procedures and regulations to prevent and punish sexual abuse in the film industry.

Meanwhile, the Film Training Center, where both Valadez and Huezo studied, announced that beginning this year, half the places in its main courses would be reserved for women.

Still, there is more work to be done, directors say. Of the more than 100 Mexican feature films produced in 2020, when the industry was affected by the pandemic, 17 percent were directed by women, down from 20 percent the year before and 25 percent in 2018.

“There’s still a long way to go — it’s not yet equal,” Huezo said. “And I hope we get there because it’s going to enrich cinema so much.”