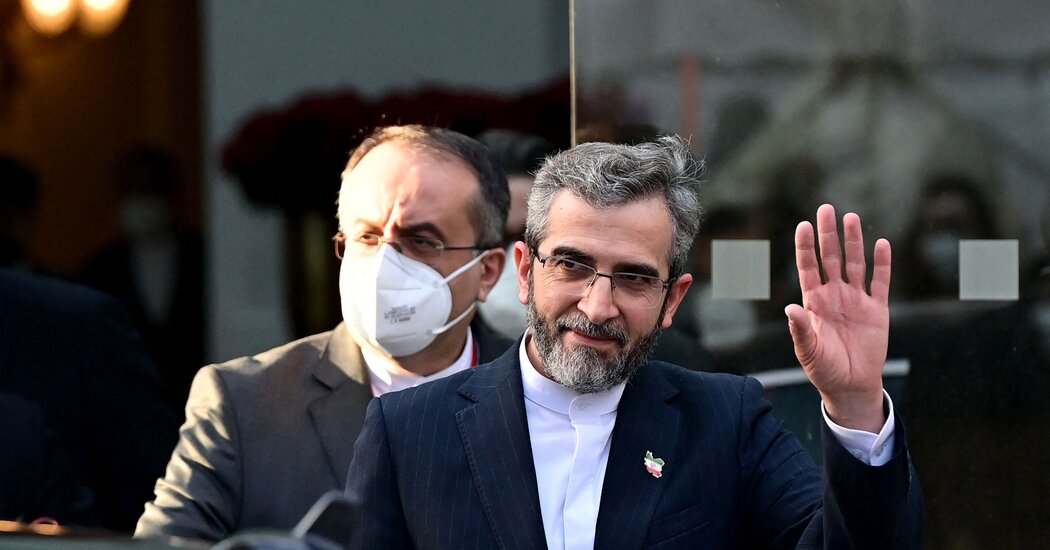 BRUSSELS — Western negotiators trying to revive the 2015 Iran nuclear deal said on Friday that the new, more hard-line government in Iran is proposing unacceptable changes to the existing draft agreement, even as it is proceeding apace with its nuclear program.

Unless Tehran shifts its stance quickly, the diplomats from Britain, France and Germany warned after five days of meetings in Vienna, there is little possibility of a successful negotiation. The talks were suspended for consultations with governments and may resume next week.

“Over five months ago, Iran interrupted negotiations, and since then, Iran has fast-forwarded its nuclear program,” the three said in a joint statement. “This week, it has backtracked on diplomatic progress made. Iran is breaking with almost all of the difficult compromises crafted in months of tough negotiations and is demanding substantial changes to the text” that undermine the draft, which was between 70 and 80 percent finished, they said.

Iran says it wants to return to the 2015 deal, known formally as the Joint Comprehensive Plan of Action, or J.C.P.O.A. But the Europeans said that some of Iran’s proposals are not only inconsistent with that deal but “go beyond” its provisions.

“It is unclear,’’ they added, “how these new gaps can be closed in a realistic time frame on the basis of the Iranian drafts.’’ While European governments “remain fully committed to a diplomatic way forward,’’ they said, “time is running out.”

It was the first set of negotiations after a five-month hiatus while a new Iranian government took office and considered its stance toward the nuclear deal, which former President Donald J. Trump abandoned in May 2018. Mr. Trump then piled on punishing economic sanctions in an effort to bring Iran back to the negotiating table in a weaker position or even to collapse the government itself.

The pressure campaign failed. The Biden administration wants to revive the deal and extend its duration to 25 years from 15. But the Iranian government not only wants all sanctions lifted, it also wants to preserve some of the major investment it has made since then in building advanced centrifuges and enriching uranium far beyond what the agreement permitted.

Enrichment means raising the proportion of fuel that is uranium-235, the most potent form of the element, which in nature is less than 1 percent of all uranium. For nuclear power plants, it is usually enriched to less than 5 percent uranium-235; for an atomic bomb, more than 90 percent is needed.

Iran has started enriching uranium to 60 percent, a level that has no civilian use, experts have said. It leaves Tehran only a month or so from being able to create bomb-grade nuclear fuel.

Iran denies it intends to build a nuclear weapon, but it is also denying the International Atomic Energy Agency, the United Nations nuclear watchdog, access to important nuclear facilities that it had under the 2015 pact. With the limited monitoring facilities still at its disposal, the agency has determined that Iran has installed advanced centrifuges in its deeply buried Fordow complex and is enriching uranium there, banned under the 2015 deal.

Initially, after Mr. Trump pulled the U.S. out of the deal, Iran adhered to its restrictions, hoping the other signatories would find a workaround. But after a year, Tehran lost patience and started breaching the limits of the agreement. It now has more than 2,300 kilograms of enriched uranium, 11 times what the deal allowed. Iran is also now turning gaseous uranium into metal, an important step in making a bomb.

Unless Iran has a sudden change of position, the United States and Israel will soon be faced with more serious questions about what to do to rein in Iran and keep their vow that Tehran will never be allowed to have a nuclear weapon. Europe, too, will feel compelled to contemplate new and much harsher sanctions.

But despite American and Israeli efforts at sabotage and even more economic sanctions, Iran is getting closer to having the knowledge needed to become a nuclear threshold state — an intentionally ambiguous position of not having a nuclear weapon but being able to construct one in a relatively short time, as little as a year.

The Iranian negotiators have said they want to reach a deal in Vienna, but that the United States, having withdrawn, must move first. They are demanding the removal of all economic sanctions, not just those on its nuclear program but others penalizing it for its role in regional conflicts, including attacks on its neighbors. Only then, they say, will Iran cut back its nuclear program.

The Western position has been “compliance for compliance,” with carefully negotiated sequencing. Iran says it also wants guarantees that Washington will never abandon the deal again, a politically and legally impossible promise.

Iran’s chief negotiator, Ali Bagheri Kani, told Iranian news outlets that “it’s true that European parties were not very satisfied with some of our proposals, but these proposals were based on common principles between the two sides.’’

This week, European negotiators said, would signal whether Iran was serious about returning to the 2015 deal. In essence, that would mean Tehran’s accepting the draft carefully worked out with the previous, more moderate Iranian government that balances concessions on both sides. But the European negotiators said that the Iranian proposals, especially on the nuclear issues, simply accepted concessions from Washington while crossing out any on their side, and would eliminate up to 90 percent of what the negotiators had already agreed to before June.

Even the draft text in June left the most difficult issues unresolved, which negotiators estimate at 20 to 30 percent of what would be a complete deal.

If the negotiators now accepted the current Iranian texts as a basis for proceeding, talks would take far too long to complete, while Iran continued to enrich. The Iranians believe that they have increased their leverage by moving so far beyond the limits of the deal, but Western officials say they have miscalculated.

American patience is clearly wearing thin. Secretary of State Antony J. Blinken said on Thursday after meeting with Russia’s foreign minister, Sergey V. Lavrov, that Iran’s actions do not bode well, but “it is not too late for Iran to reverse course.”

He said after that meeting, in Stockholm, that “Russia shares our basic perspective on this.” Despite sharp differences over Ukraine and other matters, the two men “noted the importance of continued coordination on issues in the bilateral relationship and where interests are aligned, including when it comes to blocking Iran’s pathways to a nuclear weapon,’’ the State Department said.

Mr. Blinken played down a call from the Israeli prime minister, Naftali Bennett, to abandon the negotiations in the face of what he called Iranian blackmail.

“In the very near future, the next day or so, we will be in a position to judge whether Iran actually intends now to engage in good faith,” Mr. Blinken said, adding: “I have to tell you, recent moves, recent rhetoric, don’t give us a lot of cause for optimism.”