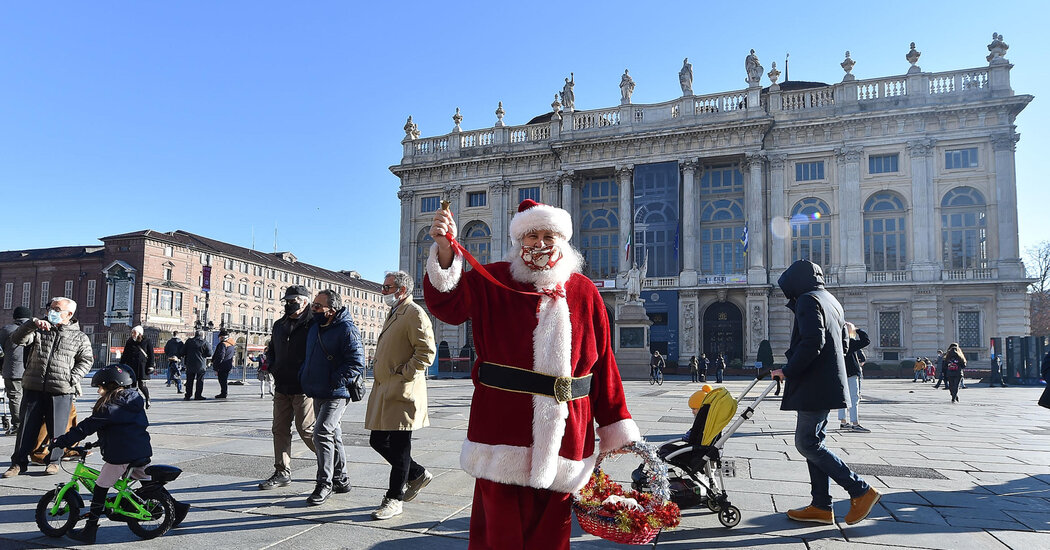 ROME — All that separated the giddy Sicilian school children from meeting Old Saint Nick — arriving on horseback with his long white beard, crimson robe and bag full of gifts — was a Christmas message from the bishop of Noto.

Children’s jaws dropped and the holiday wool fell from their eyes as, for many long minutes in the Santissimo Salvatore Basilica, the bishop continued to stick it to Santa, who he said had no interest in families strapped for cash.

“The red color of his coat was chosen by Coca-Cola for advertising purposes,” the bishop said. Big soda, he added, “uses the image to depict itself as an emblem of healthy values.”

The bishop’s broadside against Babbo Natale, as Father Christmas is called here, constituted only the latest installment in what has become a new Italian holiday tradition. Just about every year, Roman Catholic clerics insist that for Italians to keep Christ in Christmas, Santa must be kept out of it.

In 2019, a priest in the northern town of Magliano Alpi told children that there was no man dressed in red who “magically” delivered gifts. In 2018, in the Sardinian city of Quartu Sant’Elena, another priest drew tears by revealing that Santa Claus was in fact none other than their moms and dads.

This year’s episode, on Dec. 6, the feast day of St. Nicholas, was especially brazen, said Giuliana Scarnato, one of the teachers accompanying the children, none older than 9, on a school trip to the church in Noto.

She said the bishop “could have left Santa Claus out of it,” but made a point to call Father Christmas “fantastical, that he never existed.” She said that when one of the children protested, telling the bishop that her parents had assured her Santa was real, the cleric responded that the child should tell her parents “you tell lies.”

In an interview, Bishop Staglianò said he remembered putting it more tactfully, and insisted he simply explained that the roots for Santa — whom he depicted as a noxious product of the industrial-soft drink-consumerism complex — lay in the historical personage of St. Nicholas, a charitable fourth-century bishop of Myra, in modern-day Turkey, who, tradition holds, looked after the poor.

He had strong feelings on the matter.

“Is Father Christmas everyone’s father, or just some?” he said, poking holes in the case for Santa Claus. “In the lockdown, Father Christmas didn’t visit the families that he used to. Why? It’s definitely not for fear of the coronavirus.”

The bishop recalled warmly the days when Italian children would address their wish lists to the Baby Jesus, “Not Santa Claus and the reindeer and let’s go to the movies and go bowling and all this American junk.”

This year, nationalists opened a new front in Italy’s fight over the shape of Christmas. Desperate for an issue with popular appeal in a period of political stability, they have picked up on the American right’s claim to be opposing a war on Christmas.

For them, the main target has been not Santa Claus but the European Union.

“Not everyone celebrates the Christian holidays, and not all Christians celebrate them on the same dates,” read the document, which advised staff to avoid phrases like “Christmas time can be stressful.” Better, it suggested, would be “Holiday times can be stressful.”

The stress came immediately, with far-right leaders going to town.

Matteo Salvini, the nationalist leader and former deputy prime minister, posted on social media a picture of a decapitated statue of the Virgin Mary in a ditch.

Mr. Salvini, who is not especially religious but often portrays himself as a defender of Christianity, wrote on Facebook, “The European Commission invites us not to celebrate Holy Christmas to not offend others, and some moron does these gross things.”

“No one can feel offended by a child who is born in a manger,” she added.

Even Pope Francis — who has suggested that nationalist leaders are un-Christian for their opposition to migrants — has echoed them when it comes to canceling Christmas.

Asked about the E.U. document earlier this month, Francis said, “This is an anachronism,” and accused the bloc of following in the footsteps of totalitarians. “In history many, many dictatorships have tried” to undercut the church, he said. “Think of Napoleon. From there, think of the Nazi dictatorship, the communist one.”

But Francis has so far not rallied to defend Santa from his own bishop’s remarks, and the Vatican has not returned a request for comment.

Bishop Staglianò argued he was fully in line with Francis.

“With all due respect,” he said, “Santa Claus only brings gifts to those who have money” whether the children are naughty or nice.

The poor families and migrants he visits every Christmas, he said, “have never seen Santa Claus.” So he urged the children in the church to ask Santa Claus for even more gifts and, if he showed up, explain to him that they could now give to poor children “given that you never visit them!”

He said none of the mothers in the church dared contradict him and some children, emboldened by his preaching, spoke up with the power of revelation. “I always knew it, that my dad was Santa Claus,” he said one child announced.

Breaking this Christmas “spell” was progress, the bishop said, recalling that as a small child he wrote letters asking Santa for money and put them under his father’s dinner plate. He’d find an envelope with a few thousand old Italian lire under his pillow.

But he knew at age four it was his father, he said, and argued that the 7-year-olds in the pews knew the score full well too. The 62-year-old bishop said he hadn’t shattered any sugar plum illusions.

“If we knew,” he said, referring to his generation, “imagine these kids with their smartphones.”

Tradition holds that St. Nicholas was kind to children and gave gold coins to three poor sisters who would have otherwise turned to prostitution. Over the centuries he became a patron saint of, among other things, children, pawnbrokers and Russia. Still today many Russians travel to the southern Italian city of Bari where his relics, stolen by sailors centuries ago, are kept in the San Nicola Basilica.

The tradition of St. Nicholas eventually spread north, where the Dutch called him Sinterklaas, a variant of St. Nicholas. The Dutch settled New Amsterdam, later New York, where English speakers in the American colonies Anglicized the saint’s name to Santa Claus.

The reindeer, sleigh, Christmas Eve deliveries and big belly were added in the 19th century — as was the red coat, which was standard Santa garb long before Coca-Cola got involved.

But once Santa started hawking sodas, it all went downhill, Bishop Staglianò told the children in the church.

Attempting to contain the fallout, a diocese spokesman, Don Alessandro Paolino, wrote on the diocesan Facebook page, “on behalf of the bishop, I express my sorrow for this declaration which has created disappointment in the little ones, and want to specify that Monsignor Staglianò’s intentions were quite different.”

He then picked up where the bishop left off, decrying “Santa Claus aka consumerism, the desire to own, buy, buy and buy again.”

Bishop Staglianò said that he was not against all gift giving, but that it had to be a considerate present, well selected — when not in stores, then “delivered by Amazon” — and given by hand.

Despite the fervor of his anti-Santa salvo, it was ultimately no match for the sight of Old St. Nick on horseback outside the church. The children clamored around him as he dismounted, took a seat on a red throne and handed out pencils, candy and other gifts, said Ms. Scarnato, the teacher.

“Once they were outside the church the speech wore off because they were smitten with St. Nicholas,” she said. “They were happy.”