Jake Sullivan, Biden’s Adviser, a Figure of Fascination and Schadenfreude 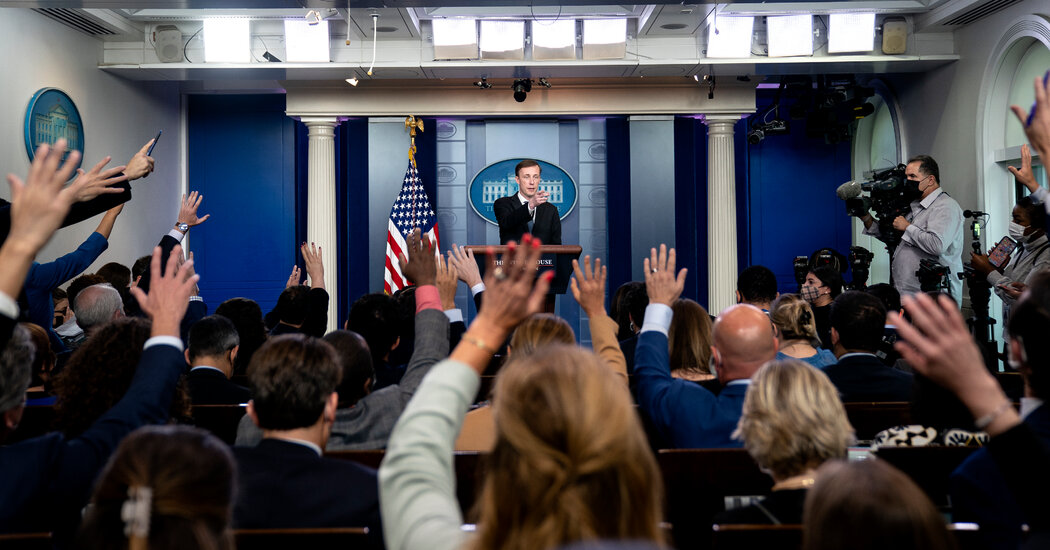 Guests at the Yale campus that weekend included a former president (Bill Clinton), a former secretary of state (Mrs. Clinton), a future secretary of state (Antony J. Blinken) and a Supreme Court justice (Stephen G. Breyer). The many former bosses on hand had pegged the golden-boy groom as an ideal national security adviser in the coming Clinton White House — which, at 40, would have made him the youngest person to hold the job.

That prediction proved largely true, if erroneous in its electoral assumption about 2016 and premature by an interlude long enough for the White House to turn over twice, China to strengthen, a pandemic to rage and the difficulties of the job to grow considerably.

So it was on Aug. 26 that Mr. Sullivan, presiding over a briefing on Afghanistan in the White House Situation Room, saw Gen. Kenneth F. McKenzie Jr., the head of the military’s Central Command, turn ashen after being handed a sheet of paper.

The general — connected via video from Kabul, where the evacuation of civilians was underway — told the room that four American service members at the airport had been killed in an apparent bombing, three were near death, and dozens more were injured. There were gasps around the table as Mr. Biden winced and stared straight ahead for a few long seconds.

“The worst that can happen has happened,” the president finally said, according to participants in the meeting.

It fell to Mr. Sullivan, who ran this daily confab and was seated at the president’s immediate left, to power through his hourlong agenda. The death toll eventually rose to 13 U.S. service members.

Washington has long been captivated by fallen star narratives. This has made Mr. Sullivan a figure of fascination in recent months, something between sympathy and schadenfreude. His daily mission of managing a sprawling national security apparatus through simultaneous crises and headaches — growing tensions with China, healing a rift with France over a nuclear submarine deal, cyberattacks — has made Mr. Sullivan the face of a foreign policy team that has endured criticism from many directions, most pointedly over Afghanistan.

“A stunning disaster from beginning to end,” Senator Mitt Romney, Republican of Utah, called the withdrawal in an interview, extending his critique to include the Biden administration’s foreign policy record in general. “And if I were the president right now, I would think seriously about changing quite a few people around me.”

Mr. Romney did not single out Mr. Sullivan, though many have, including Brett Bruen, the director of global engagement in the Obama White House, who wrote an opinion article in USA Today calling for him to be fired.

Supporters of Mr. Sullivan see two structural complications to his role. For starters, he is in a position of enormous responsibility but circumscribed authority. Condoleezza Rice, a national security adviser and secretary of state under President George W. Bush, described the job in her memoir as “rarefied staff.” Mr. Sullivan is also a product of Washington’s insular foreign policy establishment, a cohort whose traditional support for muscular U.S. foreign policy interventions has fallen out of favor across the political spectrum in the aftermath of the wars in Iraq and Afghanistan.

The question is whether Mr. Sullivan, 45, lauded as a “once-in-a-generation intellect” by Mr. Biden and “a potential future president” by Mrs. Clinton, can recover from a messy year of foreign policy predicaments.

Mr. Sullivan has told colleagues that he is determined not to have his tenure defined by the bloodshed in Afghanistan. The crisis has receded somewhat since August, allowing him to focus on trade policy, energy prices and an international supply chain that has helped fuel the spike in inflation.

Mr. Biden’s recent trip to Europe, which Mr. Sullivan was heavily involved in planning, allowed the White House to bank some solid accomplishments, including a global deal to set minimum corporate tax rates and a climate agreement to reduce methane emissions. White House officials were relieved after the international uproar over the withdrawal from Afghanistan.

Mr. Sullivan operated on an average of two hours of sleep a night for the duration of the three-week crisis in Afghanistan in August. He would mull over each long day during late-night walks home from the White House — his Secret Service detail trailed him — and often continue his meditations at home on a rowing machine. He declined to be interviewed for this article.

“There was no point that I sent an email to Jake at 2 or 3 in the morning during those weeks where he didn’t respond immediately,” said Samantha Power, the administrator of the U.S. Agency for International Development.

She pointed out that Mr. Sullivan did not have the luxury of focusing on one powder keg at a time. “While to the rest of the world there was one searing crisis unfolding in Afghanistan,” Ms. Power said, “Jake was at the same time responsible for spearheading U.S. policy on everything from cyberattacks and an earthquake in Haiti to terrorist threats.”

The most common defense of Mr. Sullivan over Afghanistan was that Mr. Biden was determined to get out, and fast, and it is the national security adviser’s role to carry out the president’s wishes. By most accounts, Mr. Sullivan supported the pullout, and, according to multiple officials asked many questions about its haste, particularly the abrupt closing in July of the Bagram Air Base.

The unruly and tragic withdrawal prompted much rebuke, not least from allies who complained that they had not been consulted. Mr. Sullivan has pushed back hard on this, insisting that allies were kept informed at every step and suggesting that they were upset with Mr. Biden’s conclusion. “I think the real issue is that many allies disagreed with the result of the decision,” Mr. Sullivan told reporters in Brussels in June.

Ultimately, though, the situation in Afghanistan reflected the reality of a job that often involves more damage control than decision-making. “The national security adviser is a classic high-responsibility position with limited actual power,” said John Gans, a foreign policy historian and the author of “White House Warriors,” about the history of the National Security Council.

“I’ve told this to Henry Kissinger,” Mrs. Clinton said in an interview. “In a world of social media and billions of cellphones, he could never have snuck off to China.”

Colleagues characterize Mr. Sullivan as ambitious and intense, but not in the obnoxious manner of a Washington type. “The highest compliment that I can pay a person is that they’re a good human being,” Defense Secretary Lloyd J. Austin III said in an interview. “I believe that Jake is a good human being.”

A lean former marathon runner, Mr. Sullivan wears sagging gray suits that (he insists) once fit him. Friends describe him as polite, curious and Midwestern in temperament, with strong allegiance to his native Minnesota.

“Reject cynicism,” he said in a commencement address at the University of Minnesota School of Public Affairs in 2013. “Reject certitude. And don’t be a jerk. Be a good guy.”

Mr. Sullivan has been known to dabble in eclectic hobbies, such as competitive speed walking. He once played on a curling team in St. Paul.

He grew up in a middle-class neighborhood of Minneapolis, one of five high-achieving siblings. His mother was a teacher and a librarian, and his father worked on the business side of The Minneapolis Star-Tribune. Mr. Sullivan attended Yale, Oxford (on a Rhodes scholarship) and Yale Law School, and was a clerk for Justice Breyer. He became one of Mrs. Clinton’s closest advisers when she was secretary of state, stayed on in the Obama administration as national security adviser to Mr. Biden when he was the vice president, and rejoined Mrs. Clinton as the senior policy adviser on her 2016 campaign for president.

Mr. Sullivan told colleagues that he felt a burden of the responsibility for Mrs. Clinton’s loss to Mr. Trump, but he was not surprised by the result. He had grown alarmed that the mood in the country was dark and anxious, and that voters seemed more receptive to Mr. Trump’s “America First” message than the Clinton campaign had appreciated.

“How do we solve for this basic and growing division in our society that gets to issues like dignity and alienation and identity?” Mr. Sullivan asked in a talk to Yale Law School students in 2017, as reported by The Washington Post. “How do we even ask the question without becoming the disconnected, condescending elite that we are talking about?”

In a strange turn of events, some critics of Mr. Biden’s foreign policy say it includes certain hallmarks of the Trump administration. Richard N. Haass, the president of the Council on Foreign Relations, wrote in Foreign Affairs that the Afghanistan withdrawal was “America-first unilateralism in practice” and that Mr. Biden “did so in a Trumpian way, consulting minimally with others and leaving NATO allies to scramble.”

White House officials bristle at comparisons to the Trump administration. They say that while previous presidents have gotten the United States into long and disastrous conflicts (Vietnam, Iraq, Afghanistan), Mr. Biden pulled the country out of one, no matter how turbulent the process. It is an assertive foreign policy, they acknowledge, but they say it comes with a softer touch and humbler words.

When allies raised concerns, the administration’s answer was not “go jump in a lake,” Mr. Sullivan told reporters in Brussels last month. He made clear that he was drawing a contrast with “how other previous American administrations might have responded.”