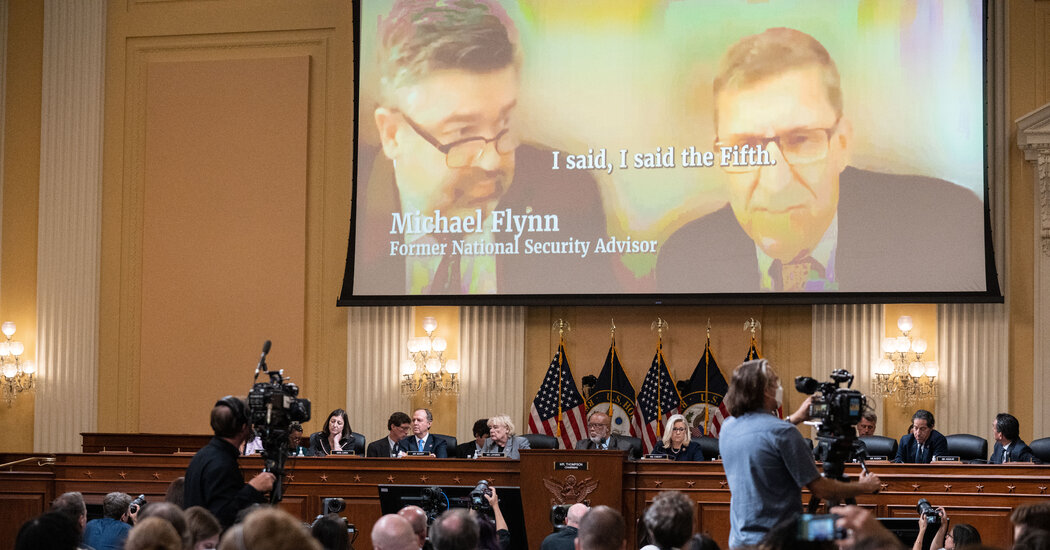 In their relationships with President Donald J. Trump in recent years, Roger J. Stone Jr., his longtime political adviser, and Michael T. Flynn, who was briefly his national security adviser, have followed a similar trajectory.

Both were either convicted of or pleaded guilty to charges stemming from the investigation into the Trump campaign’s connections to Russia. Both were pardoned by Mr. Trump after the 2020 presidential election. And both supported Mr. Trump in his relentless, multilayered efforts to reverse its outcome and remain in power.

The two were, in a sense, together again on Tuesday, when both were mentioned within an instant of one another at the House select committee hearing by Cassidy Hutchinson, an aide to Mark Meadows, Mr. Trump’s final chief of staff. Ms. Hutchinson told the panel that on Jan. 5, 2021, a day before the Capitol was stormed, Mr. Trump had directed Mr. Meadows to reach out to Mr. Stone and Mr. Flynn.

Ms. Hutchinson acknowledged that she did not know what her boss may have said to the men. But her testimony was the first time it was revealed that Mr. Trump, on the eve of the Capitol attack, had opened a channel of communication with a pair of allies who had not only worked on his behalf for weeks challenging the results of the election, but who also had extensive ties to extremist groups like the Proud Boys and the Oath Keepers, who were soon to be at the forefront of the violence.

The question of whether there was communication or coordination between the far-right groups that helped storm the Capitol and Mr. Trump and his aides and allies is among the most important facing the Jan. 6 investigators.

Barring a criminal prosecution — or something else that could force the details of the calls into the public sphere — it could be tough to be figure out exactly what Mr. Meadows discussed with Mr. Stone and Mr. Flynn.

Since late last year, Mr. Meadows has refused to comply with a committee subpoena that seeks his testimony about the weeks leading up to Jan. 6 — a move that risked his indictment on contempt of Congress charges. As for Mr. Stone and Mr. Flynn, both repeatedly exercised their Fifth Amendment rights against self-incrimination during their own interviews with the committee.

Mr. Flynn’s interview was especially remarkable, according to a recording of it played at the hearing on Tuesday. A former three-star general who still collects a military pension, Mr. Flynn pleaded the Fifth Amendment even when he was asked if he believed the violence at the Capitol was wrong, and whether he supported the lawful transfer of presidential power.

Ms. Hutchinson also told the panel that she recalled hearing about the Proud Boys and the Oath Keepers while the planning was taking place for Mr. Trump’s public event near the White House on Jan. 6 — a time, she explained, when the former president’s lawyer, Rudolph W. Giuliani, had been around.

It is possible that Mr. Stone and Mr. Flynn will receive more attention when the panel reconvenes for its next public hearing in July. That is when Representative Jamie Raskin, Democrat of Maryland, has said he intends to lead a presentation that will focus on the roles far-right groups like the Proud Boys, the Oath Keepers and the 1st Amendment Praetorian played in the Capitol attack. Mr. Raskin has also promised to explore the connections between those groups and the people in Mr. Trump’s orbit.

Both Mr. Stone and Mr. Flynn fit that description, having maintained extensive ties to far-right groups in the postelection period. Much of the contact came at pro-Trump rallies in Washington when the men were guarded by members of the groups, who served as their bodyguards.

For over a year, Mr. Stone has repeatedly denied that he had any role in the violence that erupted at the Capitol. Shortly after Ms. Hutchinson’s testimony, he denied in a post on social media that Mr. Meadows had called him on the day before the attack.

Mr. Flynn’s lawyer has failed to respond to numerous requests for comments about the role his client played in the events of Jan. 6 and the weeks leading up to it.

As early as Dec. 12, 2020, the 1st Amendment Praetorian protected Mr. Flynn when he appeared as a speaker at a pro-Trump march in Washington. Joining the group as security at the event were members of the Oath Keepers, including the organization’s leader, Stewart Rhodes, who has since been charged with seditious conspiracy in connection with the Capitol attack.

Mr. Lewis, by his own account, played a minor role in another, even more brazen, attempt to overturn the election. He has claimed that, on Dec. 18, 2020, he drove Mr. Flynn and Ms. Powell to the White House for an Oval Office meeting at which they sought to persuade Mr. Trump to use his national security apparatus to seize voting machines around the country in his bid to stay in power.

On Jan. 6 itself, according to audio recordings obtained by The New York Times, a few members of the 1st Amendment Praetorian protected Mr. Flynn again. Around the same time, according to court papers filed in a recent defamation case, a member of the group, Philip Luelsdorff, was briefly present in the so-called war room at the Willard Hotel where pro-Trump lawyers, including Mr. Giuliani and John Eastman, had set up shop to plan the objections to the certification of the Electoral College vote count.

Key Revelations From the Jan. 6 Hearings

Ms. Hutchinson told the House committee that Mr. Stone and Mr. Flynn were also at the Willard on Jan. 6. She further testified that her boss, Mr. Meadows, wanted to make plans to visit the war room, a decision that she felt was “inappropriate.” She testified that Mr. Meadows ultimately decided not to go to the hotel and “said that he would dial in instead.”

Mr. Stone, a Florida resident, had ties to the Proud Boys well before Mr. Trump lost the election, especially to Enrique Tarrio, the group’s former chairman, who lived in Miami before his arrest on sedition charges connected to the Capitol attack.

In 2019, after Mr. Stone was indicted by the special counsel Robert S. Mueller III on charges related to investigation into Russian efforts to sway the outcome of the 2016 presidential race, Mr. Tarrio responded by wearing a T-shirt reading “Roger Stone Did Nothing Wrong” at one of Mr. Trump’s political rallies. At one point, Mr. Tarrio’s personal cellphone had a voice mail message recorded by Mr. Stone.

On Jan. 6, when he was staying at the Willard, Mr. Stone was in close contact with members of both the Proud Boys and the Oath Keepers. A Proud Boy from Florida named Jacob Engels accompanied him to Washington and served as something like an aide-de-camp for him on Jan. 5 and Jan. 6.

At that same time, a small detail of Oath Keepers was also assigned to provide Mr. Stone with personal protection. At least four members of the detail are facing charges in connection with the Capitol attack.

Even if the House committee does not provide new insights about Mr. Stone at its next hearing, it is possible that the Justice Department’s inquiry into the Capitol attack could unearth something fresh about his ties to the Oath Keepers in particular.

One of the men on Mr. Stone’s security detail was Joshua James, an Oath Keeper from Alabama. In March, Mr. James pleaded guilty to sedition charges.

As part of his deal with prosecutors, Mr. James has agreed to cooperate with the government’s sprawling investigation of the Capitol attack.