Japan’s Economy Shrinks, but Outlook Is Brighter as Virus Ebbs 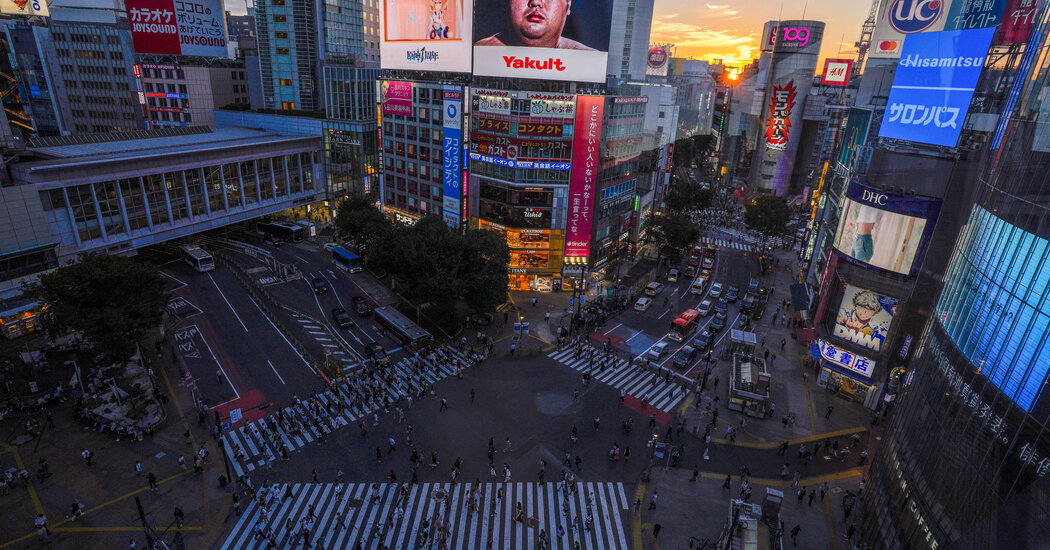 Japan’s economy continued to wobble in the third quarter of 2021, tipping back into contraction, as the country struggled to find its economic footing in the face of coronavirus restrictions and a supply chain crunch that hit its biggest manufacturers.

In the July-to-September period, the country’s economy, the third largest after the United States and China, shrank by an annualized rate of 3 percent, government data showed on Monday. The result, a quarterly drop of 0.8 percent, followed a slight expansion in the previous three-month period, when economic output grew at a revised annualized rate of 1.5 percent, or a quarterly rate of 0.4 percent.

But brighter days may be ahead, at least in the near term.

Japan now has one of the highest vaccination rates among major nations, and it has lifted virtually all restrictions on its economy as its virus caseload has fallen in recent weeks to one of the lowest levels in the world.

Seventy-five percent of the country is fully vaccinated. And coronavirus case counts have hovered in the low hundreds since mid-October, a decline of about 99 percent since their August peak, heralding the return of long-suppressed consumer spending.

Bolstering the positive outlook, policymakers, fresh off an election, are preparing a new round of stimulus that would provide support to ailing businesses and put cash in the hands of people nationwide.

The payments are likely to be more effective than previous ones, which went straight into people’s savings accounts, said Wakaba Kobayashi, an economist at the Daiwa Institute of Research in Tokyo.

“This time, people are less constrained; it’s become OK to go out,” she said, adding that “under these conditions, it’s easier to promote consumer spending.”

Even before the pandemic, Japan, with its aging population and waning business competitiveness, was struggling to achieve economic growth. After a growth spurt in the second half of last year, the economy has been stuck in a cycle of expansion and contraction, ebbing and flowing with the virus’s waves.

While other major economies have returned to life on the back of loosened restrictions, Japan has seemed unable to extricate itself from the virus-induced quagmire, the consequences of months spent struggling with the pandemic.

The country started the July-to-September period on the back foot because of a clunky vaccine rollout that left it far behind its peer countries.

By midsummer, it was in the midst of its toughest battle yet with the virus. The Delta variant caused cases to surge just as Tokyo prepared to kick off the Summer Olympics. Sponsors rolled back advertising campaigns, and tourists stayed home. The Games, which were conducted without spectators, failed to deliver the economic boost that had been promised when the country was chosen as host.

As the virus spread, Japan entered a new state of emergency. Restaurants and bars closed early and travel dried up, with many people deciding to stay home rather than brave record-high case counts.

At the same time, semiconductor shortages battered the country’s automakers, forcing many to drastically cut production. In September, the top eight Japanese manufacturers made about half as many cars as they had at the same time in the previous year.

“There was an enormous drop in production, and even if people wanted to buy cars, they couldn’t,” Ms. Kobayashi said.

Since the country ended its state of emergency last month, however, foot traffic has nearly returned to prepandemic levels, said Tomohiko Kozawa, a researcher at the Japan Research Institute.

“There’s a risk that infections could begin to spread again, but for the moment, the outlook points to recovery,” he said, adding that “we can expect high growth” in domestic consumption in the coming months.

The auto industry, too, is expected to rebound, he said, as chip manufacturers expand production and the pandemic ebbs in Southeast Asia, where the virus shut down factories that manufacture critical parts for Japanese vehicles.

“Exports should recover in the first three months of next year,” Mr. Kozawa said.

Hoping to get the economy back on track, the government is expected to pass its economic stimulus package in the coming days, which would provide cash handouts to families with children under 18, give aid to small businesses and put in place measures to offset rising fuel prices, which have increased costs across a range of industries.

Still, other factors will continue to weigh on growth. The country remains closed to tourists — and difficult to enter for many businesspeople and students — and it is unclear when the borders might reopen. Before the pandemic, many businesses in Japan had relied on a steady stream of visitors from abroad.

Although the country should be congratulated for its success in tackling the virus, it needs to articulate a vision for what comes next, said Daisuke Karakama, chief market economist at Mizuho Bank.

Even as daily reported infections in Tokyo have dropped to low double digits, “there’s no road map” he said, and “no strategy.”