Jennifer Packer: Painting as an Exercise in Tenderness 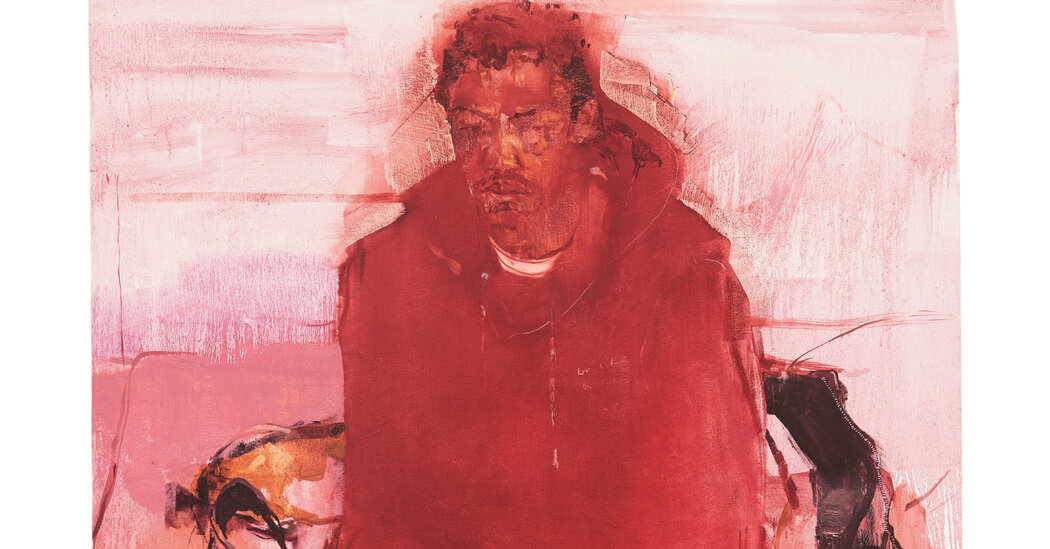 Portraiture is everywhere at the moment, in painting and photography alike, and some of the best of it has a specific aim: to make those who have been rendered invisible — on museum walls, in public culture, in political discourse — visible. This drive to honor and dignify people through representation comes at an ethical cost that often goes unremarked, though: Does exposing your sitters to the viewer’s gaze turn them into things to be looked at, emptied of their hidden complexities? Can you paint someone’s portrait while still insisting that vision cannot — perhaps even should not — capture all there is to know?

I don’t know any artist right now who is doing as much to address these questions as Jennifer Packer, whose retrospective is on view at the Whitney Museum of American Art. While painting her subjects, usually those closest to her, with a deep sensitivity, she allows them to stay just beyond our visual grasp. It’s an act of protectiveness and care that is moving and still leaves the viewer with much to contemplate.

The title of the exhibition, “The Eye Is Not Satisfied With Seeing,” refers to a passage from Ecclesiastes that describes the human yearning for knowledge that can never be sated. It’s a paradoxical but entirely apt entry point for this painter, whose work is based on keen observation, while consistently probing the limits of representation.

The show, which originated at the Serpentine Gallery in London, offers 35 works here depicting friends and acquaintances in domestic interiors; bouquets of flowers, some of which were painted to commemorate those who have died, often Black victims of police violence; and a handful of rarely seen drawings. They date from 2011, the year before Packer graduated from Yale’s M.F.A. program, to the present.

They include her largest painting, “Blessed Are Those Who Mourn (Breonna! Breonna!),” made during the Covid lockdown in 2020. At around 10 feet by 14 feet of unstretched canvas tacked to the wall, it has presence that is both monumental and informal. The title refers, of course, to Breonna Taylor, the 26-year-old Black medical worker killed by police in her home in Louisville, Ky., in March 2020 — an event, along with the murder of George Floyd by a police officer in Minneapolis, that sparked Black Lives Matter protests nationwide that May.

The picture, awash in acid yellow tones, is based on photographs of Taylor’s apartment. Packer pays particular attention to the ordinary objects that occupied what should have been a place of refuge. The artist makes you work to see her paintings, and they reward such sustained looking: Out of the largely monochromatic surface emerge a ghostly fly swatter, a box fan, a poster with an inspirational aphorism, pages from a Batman comic, an iron, a wood-grained kitchen cabinet, and more. They appear in ways that don’t always make sense. Why is the chessboard next to the stove? What, if anything, are these objects sitting upon or attached to? Why are some barely delineated while others finely rendered? The logic is that of a mind seizing on inconsequential things in the process of coming to terms with an overwhelming grief.

In the foreground, a shirtless man wearing blue basketball shorts sleeps on a tufted couch. As with much of the work in the show, subtle art-historical references accumulate and clash to convey complex moods. In this case, the figure’s tilted-back head evokes vulnerability and pleasure (think Girodet’s neoclassical painting “The Sleep of Endymion”), pathos (the severed heads of corpses painted by Géricault), and martyrdom (any number of Renaissance Pietas, or Jacques-Louis David’s “Death of Marat”).

What you do not see in this canvas, however, is Breonna Taylor herself.

Packer speaks of painting as a means of bearing witness to Black life. But bearing witness does not mean, for this artist, serving up her sitters to the viewer’s hungry gaze. As if in defiance of the endless videos and photographs of people who have been subject to state-sanctioned and institutional violence that flood our social media streams, Packer allows Taylor a rare privilege: that of privacy.

The same is true of her flower still lifes, in which delicate blossoms and foliage appear to float in an indeterminate space. The artist refers to some of these as funerary bouquets — acts of commemoration that let her, as she said in a recent interview, “move through her grief,” whether of a specific person or a generalized sense of loss. “Say Her Name” (2017) is a modern-day memento mori marking the death of Sandra Bland, the young civil rights activist, while in police custody in 2015 after her arrest for a minor traffic violation. Her death sparked renewed attention to police violence against Black women.

Packer approaches her sitters with unfailing tenderness and generosity. Some of her subjects are familiar faces from the art world: the curator Jessica Bell Brown appears in “Jess” (2018), the artists Eric N. Mack in “The Body Has Memory” (2018) and “Eric (II)” (2013), Tomashi Jackson in “Tomashi” (2016), and Jordan Casteel in “Jordan” (2014).

It is an endlessly fascinating paradox that, through a careful study of gesture, Packer creates convincing representations of real people even though her subjects often disappear into their monochromatic surroundings, or are made hard to see fully in other ways. Sketchy, even agitated contours barely define them. Paint — and with it, facial features and bodily definition — is scraped off with the palette knife as often as it is laid on.

In Packer’s canvases, the line between drawing and painting is infrathin, and so it is gratifying to see alongside the paintings a small selection of works on paper. Among them is “The Mind Is Its Own Place” (2020). Here, lines define the two figures while simultaneously discomposing and merging them. A bent head drips febrile marks as if it’s melting off the page; a leg looks bent one way, though a gray wash and the untouched white of the paper suggest that it’s kneeling another way. Again we see the play between almost inchoate mark-making and stunning specificity: An undefined face is rubbed into the surface with charcoal, but its hand is picked out, clearly, with purple crayon.

It is as if the more the artist looks, the less she knows. But this admission of unknowing — a disarmingly humble assertion from an artist who verges on the virtuosic — is a recognition of her subjects’ complex humanity that can never be contained by mere representation.

Jennifer Packer: The Eye Is Not Satisfied With Seeing

Through April 17, 2022, the Whitney Museum of American Art, 99 Gansevoort Street, Manhattan, (212) 570-3600; info@whitney.org. Visitors should book tickets in advance; those 12 years of age and older must show proof they have received at least one dose of a Covid-19 vaccine.