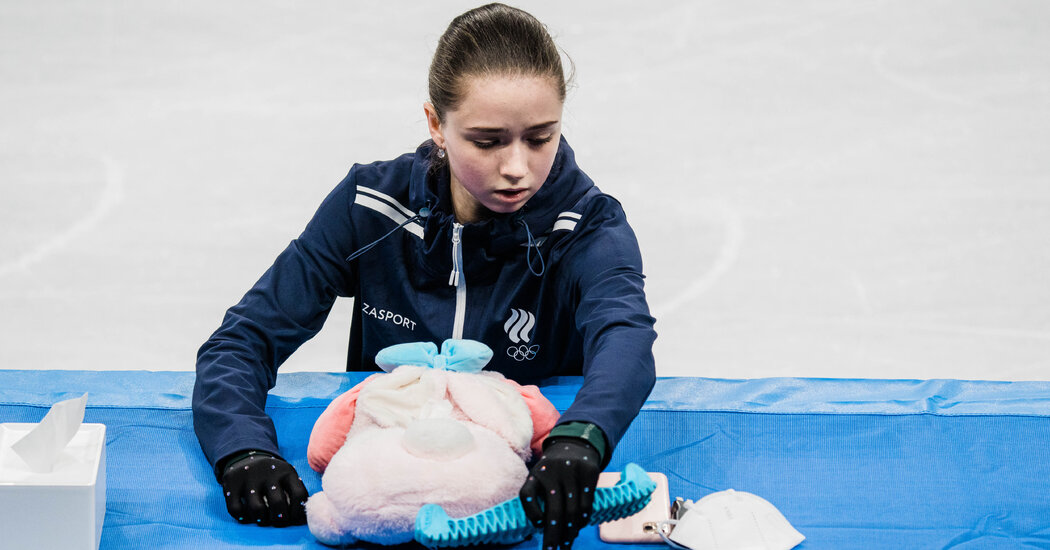 BEIJING — On Tuesday, Kamila Valieva, one of the Olympics’ youngest and biggest stars, will take to the ice and, if all goes as she plans, perform spinning jump after spinning jump on her way to an expected victory in women’s figure skating’s signature event.

But if she succeeds, she will not receive a medal. And neither will any of her competitors.

Olympic officials, faced with perhaps the most fraught controversy at these Winter Games, said on Monday that they planned to withhold medals in any event in which Valieva, 15, places in the top three until after her doping case is resolved, perhaps months from now.

The extraordinary decision has frustrated and angered many in the sport who say honest athletes are suffering unjustly because of Valieva’s presence in the competition after she failed a drug test, Russia’s history of flouting the rules and a significant failure by the system meant to weed out drug cheats.

“It’s all just so unfair,” said Adam Rippon, a former Olympic skater who is coaching the U.S. figure skater Mariah Bell at the Games. “And now it’s also so unfair to all of these ladies because their whole Olympic experience is now wrapped up in the controversy because a country doesn’t want to play by the damn rules.”

Valieva, whose positive test for a banned heart medication from a urine sample taken in December was revealed late last week, is heavily favored to win the women’s singles competition, which begins Tuesday and concludes Thursday. If she finishes in the top three, neither she nor the other medalists will receive the traditional flowers, medal or moment on the podium. Nor will the Russian team receive its gold medal for winning the team event last week, in which Valieva starred.

The International Olympic Committee said in a statement that it would conduct “dignified medal ceremonies once the case of Ms. Valieva has been concluded.” Its decision to potentially withhold medals from clean athletes came hours after a panel of arbitrators declined to reinstate a suspension that most likely would have ended Valieva’s Olympics.

The World Anti-Doping Agency and the United States Olympic and Paralympic Committee reacted angrily to the arbitrators’ decision, expressing disappointment and questioning both the panel’s logic and its commitment to fairness. Sarah Hirshland, the chief executive of the U.S. committee, said clean Olympians were being denied “the right to know they are competing on a level playing field.”

“We are disappointed by the messages this sends,” she said of the ruling to allow Valieva to compete, adding, “This appears to be another chapter in the systemic and pervasive disregard for clean sport by Russia.”

The I.O.C.’s decision came hours after the panel of arbitrators, ruling on a narrow procedural point, cleared Valieva to continue skating in Beijing, saying it would cause “irreparable harm” to Valieva if she were barred from the competition. The I.O.C., global antidoping officials and skating’s governing body had asked the panel to reinstate a suspension that would have kept her out of competition.

At a practice session a half-hour after the ruling, Valieva performed her usual array of jumps and spins impeccably as more than a hundred journalists looked on. She left the rink, carrying a favorite stuffed rabbit toy, without speaking to reporters, but Russia’s state-run TV network Channel One later broadcast her first public comments on the case.

“These days have been very difficult for me, and I’ve run out of emotions,” Valieva said. “I’m happy, but emotionally I’m tired.”

The arbitration panel that granted her reprieve met for nearly six hours on Sunday but effectively ruled on a single question: Did Russia act improperly when it lifted a suspension of Valieva last week only one day after imposing it? That decision effectively cleared the path for Valieva to compete in the singles event, but three international organizations — the International Olympic Committee, the World Anti-Doping Agency and skating’s global governing body — immediately challenged it.

Valieva took part in her own defense on Sunday, appearing briefly to offer a quick thank you for the kind words that had been entered into the record about her athletic ability and adding, in words that were translated into English, that she was not a cheat.

While the mood was tense during the hearing, there was little argument, according to people present. One person present described the exchanges before the panel as “aggressive but not emotional.”

In its decision, which was released Monday afternoon in Beijing, the panel said it had “considered fundamental principles of fairness, proportionality, irreparable harm and the balance of interests” between Valieva and the organizations seeking to bar her. Also, it noted, Valieva was a minor and did not test positive at the Beijing Games, though she could face penalties when her case is examined after the Olympics.

The panel was not charged with deciding if Russia should keep the team gold medal. Nor did it consider the question of whether Valieva was guilty of knowingly using a banned drug. But it did question the timing of the events, saying there were “serious issues of untimely notification of the results” — a nod to the unusual six-week delay between the submission of Valieva’s sample and the return of the positive result nearly four days in the Games, and after she had finished her first event.

The World Anti-Doping Agency expressed “disappointment” in the decision, and said in a statement that the panel had ignored specific provisions of the antidoping code that governs athletes, and which required a suspension — even for a teenager.

Tricia Smith, the president of the Canadian Olympic Committee, said her organization was “extremely disappointed” with the result. Canada was fourth in the team event, behind the United States and Japan, but could be elevated to bronze if a later ruling on Valieva’s doping case leads to a change in the final order.

The American sprinter Sha’Carri Richardson, who missed the Tokyo Olympics because of a positive test for marijuana around the time of the U.S. trials, said on Twitter that she saw a racial disparity in how she and Valieva were treated. Richardson has admitted using marijuana to cope with the stress of the trials and the death of her mother.

“The only difference I see is I’m a black young lady,” Richardson wrote.

The final resolution of questions of Valieva’s eligibility could take months to sort out.

Groups angry at the ruling to allow her to compete also denounced previous decisions that have allowed Russian athletes to compete at these Games even as their country is barred from them after it was caught orchestrating a state-sponsored doping scheme. As part of its punishment, Russia’s name, flag and anthem are prohibited at the Beijing Games; Russian athletes who have been cleared by their individual sports federations are competing under the banner of the Russian Olympic Committee.

“Russia has never been incentivized to reform because sport leaders favored politics over principle and rebranding over banning,” said Rob Koehler, the director general of Global Athlete, an athlete advocacy group.

Valieva tested positive for trimetazidine, a heart medication that could increase endurance. Her positive result came from a urine sample that was taken from her at the Russian national championships on Dec. 25 but not confirmed by the Stockholm lab entrusted with testing it for about six weeks.

The Russian antidoping agency said it had received notice from the Swedish lab of Valieva’s failed drug test only on Feb. 7, the same day that she led the Russians to a gold medal in the team event.

“This is a very complicated and controversial situation,” Valieva’s coach, Eteri Tutberidze, told Channel One on Saturday. “There are many questions and very few answers.” Despite those unknowns, Tutberidze declared that “we are absolutely confident that Kamila is innocent and clean.” Other Russian sports officials have expressed similar confidence in Valieva’s innocence.

Her case, though, may take months to resolve, and could end up back at the Court of Arbitration for Sport for new rulings by new panels.

Because she is only 15 and thus recognized as “a protected person” under certain antidoping rules, her case will be assessed under different standards of evidence, and she would face lesser penalties, if any, than adults would. It is also possible Valieva could receive only a reprimand for using the banned drug, or for having it in her system.

The people more likely to face punishment would be any of her coaches, trainers and medical personnel who might have known about her use of the drug, or who might have provided it to her. Both the Russian antidoping agency and WADA said they would investigate those people. But by then the Games will be over, and more than a dozen skaters — and the entire world — will be unclear about the identity of the Olympic champion.