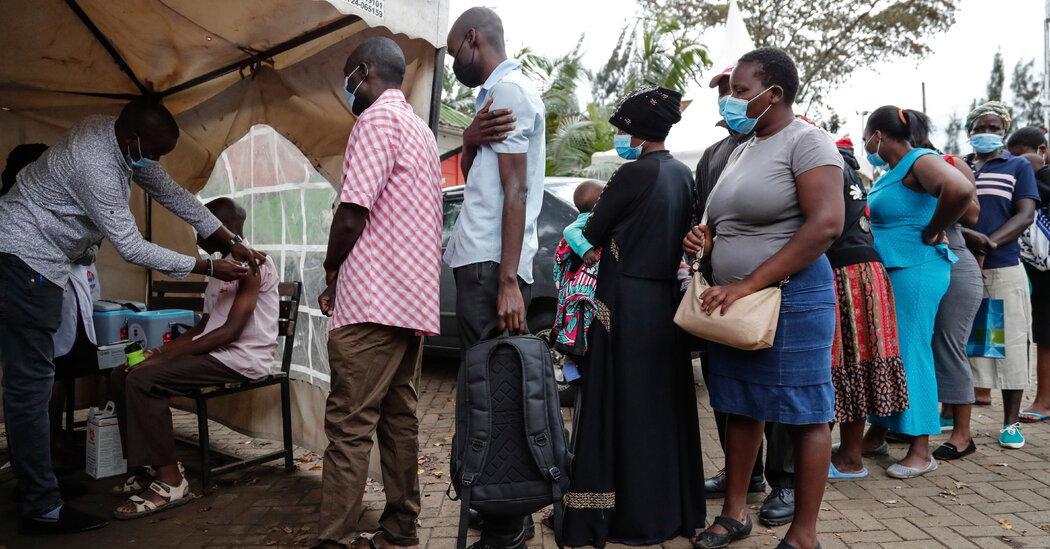 NAIROBI, Kenya — In just the past three weeks, the percentage of Kenyans who tested positive for the coronavirus jumped from less than 1 percent to more than 30 percent — the country’s highest positivity rate yet.

In Uganda, nearly 50 lawmakers and their staff members, some of them vaccinated, tested positive this week after attending a sports tournament in neighboring Tanzania.

And in Zimbabwe, skyrocketing infections have pushed the government to institute new restrictions on businesses and incoming travelers.

Across Africa, countries are reporting a surge in Covid cases, and health officials worry about how the new Omicron variant will affect the world’s least-vaccinated continent. Omicron, which was first detected in southern Africa, remains highly contagious, but so far it is causing fewer deaths and hospitalizations than previous variants such as Delta.

The latest wave comes as many African countries were beginning to reopen and businesses were hoping for a robust holiday season — only for governments to reintroduce curfews and quarantines and impose new vaccine mandates.

Even as Britain and the United States lifted Omicron-related travel restrictions on southern African states in the past week, Africans faced new travel restrictions from elsewhere because of the rising infections. Beginning Saturday, the United Arab Emirates is suspending entry for travelers from Ethiopia, Kenya, Nigeria and Tanzania, and impose additional requirements for those traveling from Ghana and Uganda.

“We are unfortunately going to be celebrating the end-of-the-year holiday season in the middle of the fourth wave that’s sweeping across the continent,” Dr. John N. Nkengasong, the head of the Africa Centers for Disease Control and Prevention, said at a news conference on Thursday.

At least 21 African countries are now experiencing a fourth wave of the pandemic, according to the Africa C.D.C. Three countries — Algeria, Kenya and Mauritius — are undergoing a fifth one.

Cases have more than doubled in recent weeks in nations including Botswana, Nigeria, Rwanda and Zimbabwe. Positivity rates have soared, too: Malawi reported a 46.29 percent positivity rate on Thursday compared with just a 1.54 percent rate on Nov. 30. Infections are surging among young people in Uganda, with some epidemiologists attributing that to younger age groups being the most active during the holiday season.

Omicron is tearing through Africa, with 22 nations now reporting the variant. It is not known whether the highly contagious variant is the dominant one or the one driving the surge of infections across Africa. But health experts say that even in countries where genomic sequencing is not readily available, the sudden bump in cases could point to the spread of the Omicron variant.

And experts say overall Covid infections in Africa are likely higher given the lack of widespread testing in many countries.

Early data from South Africa this past week suggested that the country’s Omicron wave might have peaked, with officials ending tracing efforts and scrapping isolation for people who were possibly exposed but not experiencing symptoms. Another study showed that people diagnosed with Omicron in South Africa were less likely to be hospitalized than those with previous variants like Delta.

But Dr. Nkengasong warned that the data from South Africa might not hold for other countries, because the population there is relatively young and the vaccination rate is high compared with that of many other African countries.

“Let’s be careful not to extrapolate what we are seeing in South Africa across the continent or across the world,” he said.

In hospitals in many African cities, doctors are reporting more infections.

Tinashe Gede, an immunologist who works at the public Parirenyatwa General Hospital in the Zimbabwean capital, Harare, said he had seen an increase in admissions, but without the need for ventilators and life-support machines. A significant number of new cases he has treated have been breakthrough infections, he said, but symptoms have not been severe.

Health workers are getting sick, too.

Dr. Nelly Bosire, an obstetrician and gynecologist in Nairobi, said she had to call 10 pediatricians to find one to attend to a newborn on a recent night. Eight of them, she said, were either coughing, in isolation or had a confirmed Covid diagnosis. The virus, she said, was spreading like “wildfire.”

New treatments. The Food and Drug Administration authorized in short succession the first two pill treatments for Covid-19 from Pfizer and Merck. The new drugs, which can be taken at home with a doctor’s prescription, will be available to some Covid patients who are at higher risk of becoming severely ill.

Dr. Matshidiso Moeti, the World Health Organization’s regional director for Africa, said she was still “cautiously optimistic” that severe illness and deaths will remain low in the fourth wave.

But slow vaccine rollouts might hamper those prospects, she added, given that only six African countries have hit the target set by the W.H.O. of fully vaccinating 40 percent of their population.

Even as vaccine supplies arrive, many African countries continue to face challenges getting them into people’s arms. It is difficult to deliver the vaccines to rural areas and to find enough temperature-controlled storage. Vaccine skepticism plays a role, too; Dr. Nkengasong said that about 20 percent of Africans remained hesitant to get vaccinated.

Some donated vaccines do not have a long shelf life, prompting the authorities in nations like Nigeria to destroy them.

In Kenya, vaccine rollouts are hampered because health officials have not launched nationwide campaigns to convince their population of the benefits of Covid vaccines, said Anand Madhvani, the Covid Kenya network coordinator.

For now, governments are racing to institute a motley of rules to curb the fresh wave of infections. Rwanda reimposed a night curfew and suspended concerts. Several nations, including Botswana, Ghana and Malawi, have introduced vaccine mandates targeting local populations or incoming travelers.

On Wednesday, Kenya’s health ministry said it would bar unvaccinated people from public spaces, even though a court recently halted the vaccine mandate. By Friday, some malls in the capital, Nairobi, had started asking shoppers and employees to show proof of vaccination.

The spike in cases and the ensuing restrictions are upending holiday plans for those like Denis Munjanja, a businessman in Harare who got sick with Covid last year. Mr. Munjanja said he was afraid of contracting the virus again, and he and his family have decided to stay indoors during the holiday season instead of mixing with loved ones.

Almost two years into a pandemic, he said, this wasn’t the festive mood he had hoped for. But he said, “We just have to be extra cautious.”