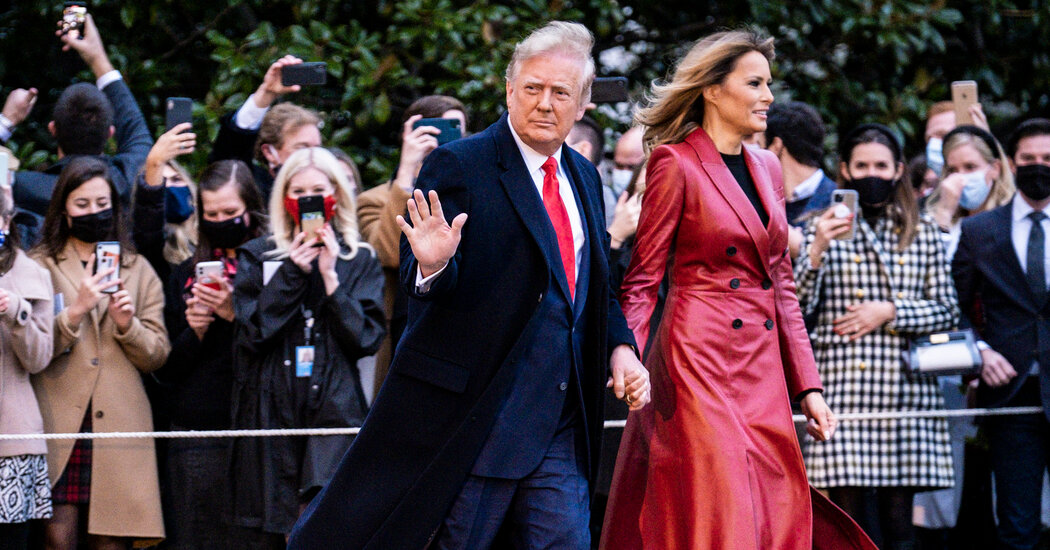 WASHINGTON — The National Archives confirmed on Friday that it had found classified information among material that President Donald J. Trump had taken with him to his home in Florida when he left office last year and that it had consulted with the Justice Department about the matter.

The agency “has identified items marked as classified national security information within the boxes,” according to a letter posted on the National Archives and Record Administration’s website.

Last month, the archives retrieved 15 boxes that Mr. Trump took with him to his Mar-a-Lago home from the White House residence when his term ended. The boxes included material subject to the Presidential Records Act, which requires that all documents and records pertaining to official business be turned over to the archives.

The items in the boxes included documents, mementos, gifts and letters. The archives did not describe the classified material it found other than to say that it was “classified national security information.”

Because the National Archives “identified classified information in the boxes,” the agency “has been in communication with the Department of Justice,” said the letter, written by David S. Ferriero, the national archivist, and sent to Representative Carolyn B. Maloney, Democrat of New York and the chairwoman of the House Oversight Committee, who has been scrutinizing how Mr. Trump handled presidential records.

Mr. Trump made attacking Hillary Clinton’s mishandling of national security materials a centerpiece of his 2016 presidential campaign. The latest revelations about Mr. Trump’s own laxity with classified information and his haphazard adherence to federal record-keeping laws have drawn cries of hypocrisy from Democrats.

Asked how Republicans would square Mr. Trump’s criticism of Ms. Clinton with his own record, a spokesman for the Republican National Committee, which at one point approved a resolution condemning Ms. Clinton for using a private email server while she was secretary of state, did not respond.

The New York Times reported last week that among the documents that were sent back to the National Archives were some that archivists believed were classified, and that the agency had consulted with the Justice Department about the discovery.

It is not clear what steps, if any, the Justice Department is taking to address the matter.

Mr. Ferriero’s letter came on the same day that a federal judge rejected Mr. Trump’s request to dismiss three civil suits seeking to hold him to account for his role in the attack on the Capitol last year. And it came a day after a judge in New York ruled that the former president had to answer questions from state investigators examining his company, the Trump Organization, for evidence of fraud.

In the past two weeks, a series of disclosures has raised new questions about the Trump administration’s failure to follow federal record-keeping laws and its handling of classified information as Mr. Trump left office.

Focusing attention on a new element of the issue, the National Archives said in its letter on Friday that the Trump White House had failed to turn over records that included “certain social media records.”

The Trump White House, the archives said, failed to take “any steps to capture deleted content from any Trump Administration social media account other than @realDonaldTrump or @POTUS.” The accounts in question included those for aides such as Andrew Giuliani, Chad Gilmartin, Ivanka Trump, Kayleigh McEnany, Kellyanne Conway, Mark Meadows and Peter Navarro that the archives said contained presidential records.

The archives also has not been able to locate any of the Snapchat messages sent by the Trump White House.

Among those staff members was Mr. Meadows, Mr. Trump’s former chief of staff, who recently turned over hundreds of pages of documents to the committee investigating the Jan. 6 attack on the Capitol, some of which came from his personal cellphone. The committee said it had questions about why Mr. Meadows had used a personal cellphone, a Signal account and two personal Gmail accounts to conduct official business, and whether he had properly turned over all of the relevant records from those accounts to the National Archives.

Mr. Ferriero made clear in his letter that the archives had been concerned for several years about Mr. Trump’s failure to follow the record-keeping law.

In June 2018, the archives “learned from an article in Politico that textual presidential records were being torn up by former President Trump and that White House staff were attempting to tape them back together,” the letter said.

The letter added, referring to the National Archives and Records Administration: “The White House Counsel’s Office indicated that they would address the matter. After the end of the Trump administration, NARA learned that additional paper records that had been torn up by former President Trump were included in the records transferred to us. Although White House staff during the Trump administration recovered and taped together some of the torn-up records, a number of other torn-up records that were transferred had not been reconstructed by the White House.”

Such an investigation would be highly complex, in part because, as president, Mr. Trump had the ability to easily declassify whatever information he wanted. He could argue that he declassified the materials he took with him before he left the White House.

Regardless of whether the bureau opens a criminal investigation, it often conducts a review to determine whether any of the mishandled information exposed sources and methods, and could have damaged national security.

The department could also choose to treat the matter as more routine. Senior U.S. officials often mistakenly mishandle classified information, for example by taking it home from work or accidentally using it or discussing it on unsecured channels. In many of those instances, the F.B.I. treats the matter like “a spill” that has to be cleaned up.

In those cases, F.B.I. agents take a range of measures to ensure that any national security secrets that may have been exposed are collected so they can be stored on secure channels, and they scrub, or destroy, electronic devices where the information may have been housed or discussed.

Mr. Trump’s handling of government documents has come under growing scrutiny. A book scheduled to be released in October by a Times reporter revealed how staff members in the White House residence periodically discovered wads of printed paper clogging a toilet, leading them to believe that Mr. Trump had tried to flush them.

The former president’s use of cellphones to conduct official business also could have led to large gaps in the official White House logs of his calls on Jan. 6, 2021, hindering the House select committee’s investigation into the Capitol riot. If Mr. Trump did not preserve cellphone records and failed to turn them over to the National Archives, that could also be a violation of the law.

Ms. Maloney, the New York Democrat, had warned as early as December 2020 that she believed the Trump administration was not complying with the Presidential Records Act. She wrote a letter to Mr. Ferriero, the national archivist, expressing what she called “grave concerns” that the outgoing administration “may not be adequately preserving records and may be disposing of them.”

Weeks after the Capitol riot, Ms. Maloney requested voluminous materials from the archives, including documents and communications before, during and after the Jan. 6 attack pertaining to the counting of electoral votes and planned demonstrations and violence.

Then, last week, Ms. Maloney announced that she was starting an investigation, after The Washington Post reported that Mr. Trump had been destroying documents and moving boxes to his property in Florida instead of turning them over to the archives.

Ms. Maloney said on Friday that the letter from the archives “confirmed that potentially many more Trump Administration records, including direct messages sent by senior officials on multiple social media platforms, are missing.”

She added, “These new revelations deepen my concern about former President Trump’s flagrant disregard for federal records laws and the potential impact on our historical record.”