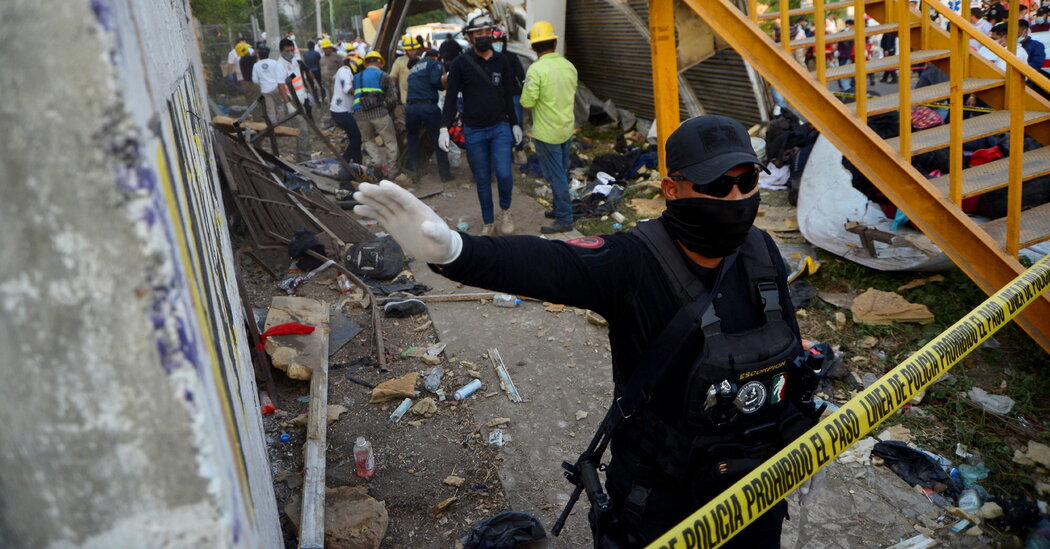 MEXICO CITY — At least 53 people were killed and dozens injured in a horrific truck accident in southern Mexico on Thursday, the authorities said, with most of the victims believed to be migrants coming from Central America.

The accident is one of the deadliest involving migrants in decades, and follows the death of 13 migrants in a car accident on the U.S. border in March.

Mr. García said that, based on witness testimony, the truck was traveling at excessive speed and then flipped over while rounding a sharp curve, with the trailer carrying the migrants then crashing into a pedestrian bridge and construction nearby.

Images and videos shared on social media showed more than a dozen bodies laid out on the road covered in white sheets near what appeared to be the twisted remains of an overturned vehicle.

The Civil Protection Service said on Facebook that another 58 people had been injured. The accident occurred on the highway between the town of Chiapa de Corzo and the state capital.

“My solidarity with the victims of the traffic accident,” the state’s governor, Rutilio Escandón, said on Twitter. “I have given instructions to provide prompt attention and assistance to the injured. Responsibility will be determined according to the law.”

Bordering Guatemala, the state of Chiapas has in recent years seen a surge of migrants from Central America, many of them being smuggled through Mexico on their way to the United States border. A record 1.7 million migrants, mainly from Mexico and Central America, were found trying to enter the United States illegally in the 12 months leading up to October this year.

Attempting to reach the United States, whether to seek asylum or to search for economic opportunities, is a dangerous and at times deadly process, with migrants having to travel through cartel-infested territory in northern Mexico, often paying steep prices to smugglers to get them to the border.

Migrants are regularly packed into trucks or cars as they make the journey north, and frequently fall prey to violence along the way. In January, the bodies of 19 people, most of them migrants, were found in a charred pickup truck near the U.S. border. A group of 12 police officers were later arrested in connection with the crime.

At least 3,575 deaths have been documented on the United States-Mexico border since 2014, according to the International Organization for Migration, with 650 people killed attempting to cross the U.S. border this year alone — the highest number since the I.O.M. began documenting deaths in 2014.

“The rising migrant death toll in the region is highly alarming,” said Michele Klein-Solomon, I.O.M. regional director for Central, North America and the Caribbean, in a statement on Wednesday.

At least 750 migrants have been killed trying to cross Mexico since 2014, according to the I.O.M., and thousands more have simply disappeared.

Thursday’s accident comes just a day after the United States relaunched a contentious migrant enforcement program known as Remain in Mexico, which would force asylum seekers to wait across the border while their cases are determined in U.S. courts. The program has been criticized by human rights groups because of the unsafe conditions migrants face in Mexico.

“Under the Remain in Mexico program, the United States and Mexico have knowingly put thousands of asylum seekers’ lives in danger,” Ari Sawyer, a researcher for Human Rights Watch, said in a statement Thursday.