N.C.A.A. Tournament Peek: Gonzaga Remains the Favorite, but the Blue Bloods are Back 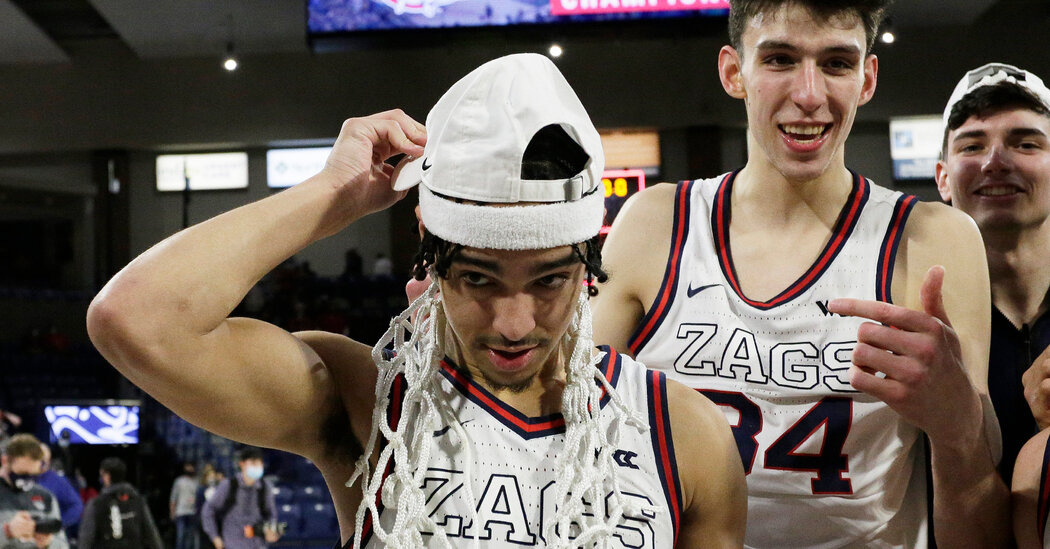 The N.F.L. and college football have crowned their champions, with the Los Angeles Rams and the University of Georgia winning titles. The Winter Olympics are in the rearview mirror. And the start of the Major League Baseball season is in flux because of a lockout.

But the men’s college basketball season is just heating up, with the N.C.A.A. tournament set to begin March 15 before concluding with the Final Four in New Orleans in early April.

Here’s a look at the major themes of the college season so far.

Gonzaga is once again the team to beat.

Because Gonzaga is in the West Coast Conference — meaning most of its games air late at night on the East Coast — a lot of people don’t get to see the Bulldogs much before March.

But one year after suffering their only loss of the season in the N.C.A.A. championship game against Baylor, the Bulldogs are once again the favorites to win their first title. They are ranked No. 1 in The Associated Press poll and in Ken Pomeroy’s rankings, and when the N.C.A.A. Division I Men’s Basketball Committee announced its projected Top 16 seeds on Sunday, Gonzaga was at No. 1 overall.

Unlike last season, the Bulldogs (23-2, 12-0 W.C.C.) won’t enter the national tournament undefeated because they lost to Duke and Alabama, but they have won 16 straight games and already wrapped up their 10th straight W.C.C. regular-season title.

With the conference possibly sending four teams to the N.C.A.A. tournament this year, Gonzaga Coach Mark Few said that “to be undefeated is quite an accomplishment.”

Entering Tuesday, the Bulldogs led Division I in scoring at 89.5 points per game — and, once again, a team will likely have to put up at least 85 or 90 points to have a chance at upsetting them in March. Five Gonzaga players boast scoring averages in double figures, led by the skilled forward Drew Timme (18.0 points per game, 6.3 rebounds per game) and the 7-foot freshman sensation Chet Holmgren, who is averaging 14.4 points, 9.6 rebounds and 3.4 blocks per game and is projected to be a top-three pick in this summer’s N.B.A. draft. In a year without many elite point guards at the top of college basketball, the Gonzaga senior Andrew Nembhard, who averages 10.9 points and 5.7 assists, might be the most savvy floor general.

The blue bloods Duke, Kansas and Kentucky are all contenders.

Last year, Duke and Kentucky missed the N.C.A.A. tournament in the same year for the first time since 1976. Another powerhouse, Kansas, made the tournament as a No. 3 seed but was destroyed, 85-51, by Southern California, a No. 11 seed, in the second round.

This season, the three blue bloods have come roaring back, and all have a legitimate shot to reach the Final Four and contend for a title.

Kansas, 23-4 and 12-2 in its conference after beating Kansas State by 19 points on Tuesday, sits atop the powerhouse Big 12. Powered by the national player of the year candidate Ochai Agbaji, who is averaging 20.2 points and 5.2 rebounds, Kansas has been projected as a No. 1 seed — along with Gonzaga, Auburn and Arizona — by the Division I Men’s Basketball Committee, whose members include athletic directors and conference commissioners.

Duke and Kentucky, which both feature a nice blend of one-and-done freshmen alongside experienced older players, were projected as No. 2 seeds.

Mike Krzyzewski, 75, is coaching his final season at Duke (23-4, 13-3 Atlantic Coast Conference) and appears to have all the weapons he needs to contend for the program’s sixth championship.

The Blue Devils feature five players who could be selected in the first round of the N.B.A. draft, led by the 6-foot-10 freshman Paolo Banchero, a projected top-three pick averaging 16.9 points and 8.4 rebounds per game; the junior wing Wendell Moore Jr. (13.9 points, 5.6 rebounds and 4.6 assists); and the freshman guard Trevor Keels (12.0 points and 4.0 rebounds).

Keels recently said that this year’s team had “better talent” and “better depth” than the 2014-15 Duke squad that won the N.C.A.A. championship — and that it can “definitely” cut down the nets.

Kentucky, which lost by 8 points to Duke in November at Madison Square Garden and blew out Kansas on the road by 18 points in January, has a shot at the title because it blends elite freshmen like point guard TyTy Washington, averaging 12.4 points and 4.1 assists per game, with skilled older players and transfers.

Oscar Tshiebwe, a 6-foot-9, 255-pound junior transfer from West Virginia who was called “a mountain masquerading as a man” by the dogged talent scout Tom Konchalski, is averaging 16.4 points per game and a Division I-best 15.2 rebounds. He is a leading contender for the John R. Wooden and Naismith Awards, given to the top college basketball players.

Kentucky (22-5, 11-3 Southeastern Conference) also has a variety of other weapons: Kellan Grady, a graduate transfer from Davidson, is averaging 12.3 points per game while shooting 45.1 percent from 3-point range, and Sahvir Wheeler, a junior transfer from Georgia, is a speedster averaging 9.6 points and 7.1 assists.

Several first-year coaches have their teams in contention.

When the list of the 15 coaches in contention for the Naismith Coach of the Year Award was released last week, it featured some household names who have run their programs for years: Gonzaga’s Few, Baylor’s Scott Drew, Kentucky’s John Calipari and Auburn’s Bruce Pearl. Few, Drew and Pearl’s teams have all been ranked No. 1 in The Associated Press poll this season.

But two first-year coaches are also in the mix for the award, and for deep runs in March: Arizona’s Tommy Lloyd and Texas Tech’s Mark Adams.

Lloyd, 47, came to Arizona from Gonzaga, where he was the chief recruiter under Few, to replace Sean Miller, who failed to reach a Final Four during his 12 years with the program and whose team was the subject of F.B.I. and N.C.A.A. investigations.

All Lloyd has done in his first season as a head coach is to lead the Wildcats (24-2, 14-1 Pac-12 Conference) to the top of the league standings with significant contributions from the projected N.B.A. lottery pick Bennedict Mathurin, a 6-foot-6 native of Montreal averaging 17.4 points and 5.8 rebounds.

Adams, 65, was elevated to the head coaching position at Texas Tech in April after Chris Beard left for Texas. Despite losing several players to transfers, Adams rebuilt the roster, and the ninth-ranked Red Raiders (21-6, 10-4 Big 12) now have two wins over both Texas and Baylor, the defending national champion.

“He always wants to get the best out of us, and he’s doing a good job right now,” said the junior guard Terrence Shannon Jr.

Some big-name coaches and programs are making headlines — and not in a good way.

Juwan Howard, Penny Hardaway and Patrick Ewing have several things in common: they all starred in the N.B.A. and they all now coach at their alma maters.

They’re also all struggling in various ways at the college level.

Howard, the Michigan coach, was suspended for five games and fined $40,000 on Monday after he slapped a Wisconsin assistant coach in the head in the handshake line after a blowout loss to the Badgers on Sunday. Howard, who apologized and will be eligible to return for the Big Ten Conference tournament, said he was upset with a late timeout called by Wisconsin Coach Greg Gard while the Badgers had a double-digit lead.

The veteran coach Phil Martelli will lead Michigan (14-11, 8-7 Big Ten), which is on the bubble for the N.C.A.A. tournament after being ranked as high as No. 4, for the rest of the regular season.

At Memphis, Hardaway has talked openly about aspirations of winning national championships, and the Tigers were among the preseason favorites after Hardaway persuaded the superstar recruits Emoni Bates and Jalen Duren to reclassify and enroll this season as freshmen. But Bates, who was once compared to a young Kevin Durant, struggled early and hasn’t played since late January because of a back injury. Without Bates, the Tigers (15-9, 9-5 American Athletic Conference) won six straight games before losing to Southern Methodist on Sunday. They own impressive wins over Alabama and Houston but remain on the N.C.A.A. tournament bubble.

At Georgetown, Ewing and the Hoyas are making history — and not in a good way. They’ve lost 16 straight games and stand at 6-20 overall and 0-15 in the Big East Conference. One year after winning the conference tournament, Georgetown is trying to avoid becoming the first Big East team to finish 0-19 in league play.

When Baylor won the N.C.A.A. title last spring, the team started two transfers (Davion Mitchell and MaCio Teague) and brought two more off the bench (Adam Flagler and Jonathan Tchamwa Tchatchoua). Gonzaga started another transfer, Nembhard, at point guard in its run to the title game.

Given that more than 1,700 players entered the N.C.A.A. transfer portal after last season, don’t be surprised to see them play a role on teams that advance deep into March. Gonzaga, Duke, Kansas, Kentucky and Texas Tech all have key transfers on their rosters. After losing three players to the pros, Baylor brought in the former Arizona and Georgetown guard James Akinjo, who is averaging 13.2 points and 5.8 assists for the 10th-ranked Bears.

The 7-foot-1 Kessler has teamed up with Jabari Smith, the potential No. 1 pick in this year’s N.B.A. draft, to give the Tigers a fearsome front line that is the envy of some N.B.A. teams. After averaging 4.4 points, 3.2 rebounds and 0.9 blocks as a freshman with the Tar Heels, Kessler is averaging 12.0 points, 8.2 rebounds and a Division-I best 4.6 blocks. In a recent win over Texas A&M, Kessler had a triple-double with 12 points, 12 blocks and 11 rebounds.