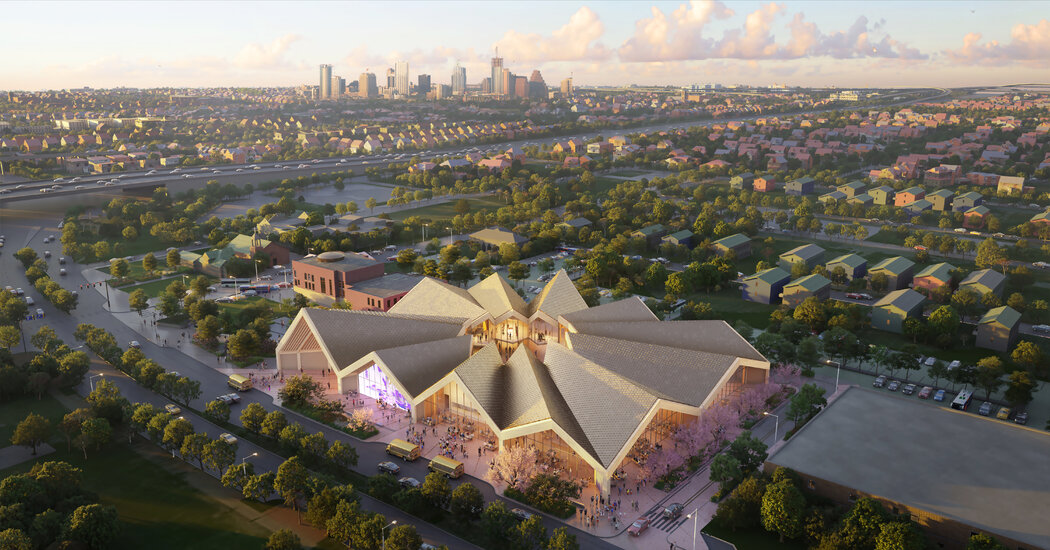 In 2016, at 89, Opal Lee walked from her home in Fort Worth to Washington, D.C., to help get Juneteenth made a federal holiday, which it finally was in 2021. And for nearly 20 years, she has operated a modest Juneteenth Museum in a property on Rosedale Street, which also served as a filming location for the 2020 movie “Miss Juneteenth.”

But Lee, now 95 and known as “the grandmother of Juneteenth” — or more affectionately as “Ms. Opal” — wanted a more permanent institution that would commemorate the holiday that celebrates the end of slavery in the United States.

That vision is getting closer to reality as plans move forward for the National Juneteenth Museum, a $70 million project that aims to put a shovel in the ground before the end of the year and to open in time for the Juneteenth holiday in 2024.

The 50,000-square-foot museum, designed by the architecture firm Bjarke Ingels Group, or BIG, will explore the events surrounding June 19, 1865, when Maj. Gen. Gordon Granger in Galveston, Texas, issued General Order No. 3, telling the people of the state that — in accordance with the Emancipation Proclamation — “all slaves are free.” The 13th Amendment, ratified months later, abolished slavery in the final four border states that had not been subjected to President Abraham Lincoln’s order.

“The plans are beautiful. It’s off the chain,” Lee said in an interview. “Juneteenth means freedom to me. We want people to understand the past, we don’t want it watered down.”

The museum, which will have a significant educational component, will also help ensure that the country does not let slavery “happen again,” added Lee, who has been nominated for the 2022 Nobel Peace Prize. “And it could, if we’re complacent.”

The project, at the corner of Rosedale Street and Evans Avenue in Fort Worth, endeavors to revitalize the surrounding area, which went into decline in the 1960s, after being divided by the I-35W highway. A 2019 study conducted by the data company MySidewalk showed the area’s median household income as about $26,000 and that a third of the residents live below the federal poverty level.

The development will include a business incubator to promote Black entrepreneurship, a food hall featuring culturally Black cuisine from local vendors, a flexible performance space and a theater.

“It’s a neighborhood like many across the country that has been the victim of flight and neglect,” said Jarred Howard, an executive with the project’s developer, Sable Brands, a marketing group. “For the better part of the last 30 years or so, the neighborhood has been downtrodden and destitute. This development will be catalytic in the resurgence of its economic and cultural health.”

Howard added that the project hopes to anchor “a corridor for Black commerce,” drawing other new businesses to the area. The city is already developing a $13.2 million Evans & Rosedale Urban Village just north of the museum site, with apartments and townhouses.

“For decades, Juneteenth has been part of the fabric of our city,” Fort Worth’s mayor, Mattie Parker, said in a statement in 2021, “and this museum is a welcome addition to its incredible legacy.”

The museum has so far been funded by private donations from individuals, corporations and foundations; it is also seeking government support. The goal is to offer free admission, underwritten by fund-raising and by the revenue-generating aspects of the mixed-use development.

The museum is initially projecting annual attendance of 35,000 with a 10 percent increase each year, Howard said.

The building’s design — in collaboration with the local architects KAI, a minority-owned firm — will use materials like heavy timber and draw on the local architecture of gabled rooftops and protruding porches. “It will have a handcrafted quality to it,” said Douglass Alligood, the BIG partner in charge of the project, adding that he hoped the building would convey “spiritual uplift” in keeping with Lee’s example.

“She wanted to make sure stories were told and she wanted to pay homage to those whose backs we came up on,” Alligood said. “It’s not about her, it’s about our forebears.”

Alligood said the project had a particular resonance for him as a Black architect. “This type of project in an African American community focused on African American culture is a unique opportunity in my career,” he said. “The Historic Southside was thriving before the highway went through and split it in half. I don’t think one building will resolve everything or change history, but this gives me a chance to have input in a way that could be really significant.”

Although Galveston is the Texas location most connected with Juneteenth, “the national narrative is one we hope to focus on,” said Dione Sims, who is Lee’s granddaughter and the museum’s founding executive director.

The museum will tell a broad story of emancipation, highlighting allies like the Quakers, who helped shepherd people to freedom in the North; white and Black abolitionist societies; the southern Underground Railroad into Mexico; and figures like Sam Houston, who, as president of the Republic of Texas in 1837, outlawed the illegal importation of slaves into Texas.

“It’s a holiday for everybody because everybody can find themselves in the Juneteenth story,” Sims said. “That’s the mission and the goal of the National Juneteenth Museum.”

Lee traveled two and a half miles each day in 2016 to symbolize the two and a half years between the passing of the Emancipation Proclamation and June 19, 1865, when that message reached Galveston, where Black Texans were still enslaved.

In 2020, she started a Change.org petition that collected more than 1.5 million signatures, which she presented to Congress. She was honored at the White House in 2021 as President Biden signed the bill designating the new holiday.

“You cannot talk about the history of the country too much,” she said. “You cannot talk too much about what is still pervasive in our culture, in our national narrative, that is affecting so many lives today: systemic racism rooted in slavery. The freedom from slavery, or the emancipation of the human spirit, is what we’re going to help elevate.”