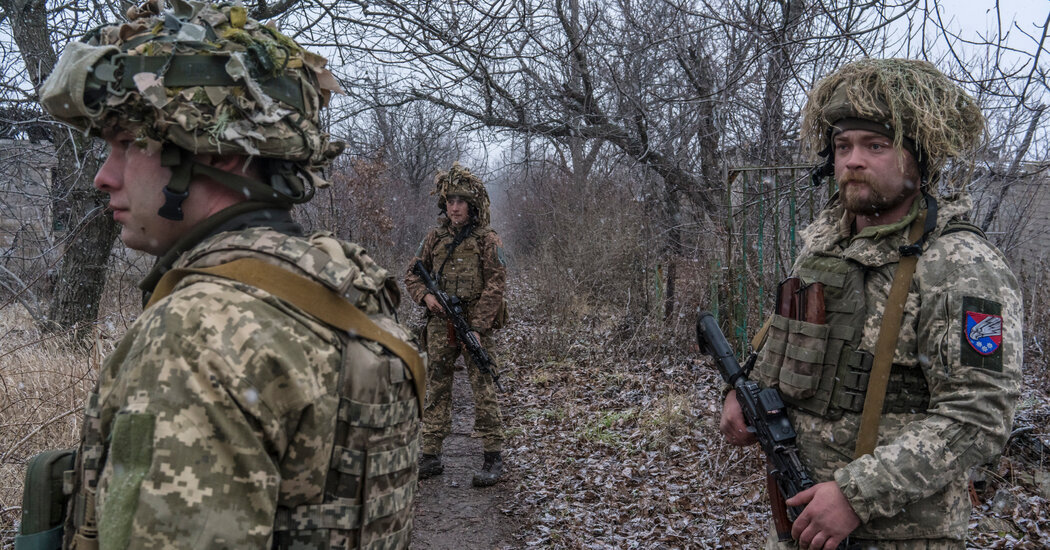 KYIV, Ukraine — Facing a building threat from Russia, Ukraine’s president sought security guarantees from the NATO chief in a meeting on Thursday and came away with a renewed commitment that his country could eventually join the military alliance despite stiff objections from its Russian neighbors.

Though Western leaders have made that pledge before, the timing of the statement by NATO’s secretary general, Jens Stoltenberg, sent an unmistakable message of support for Ukraine against any new Russian aggression that may come.

Ukrainian officials have been pleading with their NATO allies for weeks for weaponry they say they need to deter or possibly defend themselves in case of a major military incursion by Russia that Ukrainian and Western intelligence agencies predict could begin within weeks or months. But NATO, like the leaders of Western countries and the White House, declined to make specific commitments to augment the military support it already provides, largely ruling out the provision of additional weapons systems or troops.

Standing next to the Ukrainian leader, Volodymyr Zelensky, at NATO headquarters in Brussels, Mr. Stoltenberg referred to a 2008 summit in which NATO members promised membership to both Ukraine and Georgia, without specifying a time frame.

“We stand by that decision,” he said.

Though there is no indication that Ukraine would be ready join the alliance anytime soon, Russian leaders argue that the promise of membership is a threat to their country’s national security, and have indicated that they would be prepared to use force to stop it.

More than 100,000 Russian troops have now been deployed to regions in the north, east and south of Ukraine, together with heavy artillery and tank units, as well as rocket forces armed with missiles capable of striking deep within Ukraine, according to Western and Ukrainian officials.

It is Russia, Mr. Zelensky said on Thursday — through its 2014 annexation of the Crimean Peninsula and continued military support for separatists in Ukraine’s east — that has pushed the country toward NATO. The alliance has an interest in supporting Ukraine at this moment, he suggested, because should Russia attack, NATO could be drawn in whether it wants to be or not.

“If our army is not able to hold up,” he said, it is NATO that will have to step in to contain any fallout from a Russian attack that might affect its member states.

The United States, the European Union and NATO have all said that any new Russian incursion into Ukraine would be met with harsh, intensified and extraordinary economic sanctions, including the likelihood of killing a favorite Kremlin project, the Nord Stream 2 gas pipeline to Germany, which bypasses Ukraine. The United States has also suggested that NATO would beef up its troop presence near Russia’s borders.

E.U. leaders, who will also hold a summit meeting on Thursday, met on Wednesday with Mr. Zelensky. At their Thursday meeting, they are expected to issue a stern warning to Russia about “massive consequences and severe costs,” should President Vladimir V. Putin of Russia start a new military operation against Ukraine, according to a draft communiqué.

There is no indication that Mr. Putin has decided whether to begin such an attack, and there is no consensus among Western officials and analysts about why he might want to do so now. But for much of this year, Mr. Putin has been fixated on Ukraine, seemingly angered that a country so close to Russia in culture, language and geography has drifted so far from its orbit.

At the very least, according to observers, the military buildup appears to be part of an attempt to pressure NATO countries to reverse what the Kremlin sees as a plot to wrest Ukraine away.

NATO regards the notion of such a plot as absurd.

More than a dozen NATO countries have military advisers in Ukraine, including 150 from the U.S. Special Forces and National Guard. The United States alone has spent $2.5 billion in security assistance, which has included high-tech surveillance equipment, armed patrol boats and Javelin anti-tank systems.

But because Ukraine is not a NATO member, the alliance is under no obligation to defend it in case of attack.

That has given no visible comfort to the Kremlin, however, which has described NATO activities in Ukraine as an existential threat, even as Russian leaders have dismissed the threat posed by their own military buildup on the Ukrainian border.

In phone conversations this week with the leaders of Britain and France, two of NATO’s largest members, as well as the president of Finland, a close NATO partner, Mr. Putin delivered an identical demand: the immediate start of negotiations to codify strict limits to NATO’s expansion, particularly with regards to extending membership to Ukraine.

Mr. Putin delivered a similar message to President Biden in a video call last week that was aimed at ratcheting down tensions over Ukraine.

Ukraine has been locked in a grinding war with Russian-backed separatists since 2014 that has cost more than 13,000 lives. But Western officials have said that Mr. Putin’s demand to impose strict limits on NATO expansion is a nonstarter.

“NATO’s support for Ukraine is not a threat to Russia,” Mr. Stoltenberg said on Thursday. “Ukraine has the right to choose its own security arrangements. This is a fundamental principle of European security. And a decision on whether Ukraine can join NATO will be taken by Ukraine and 30 NATO allies alone.”

In the face of such refusals, the statements of Russia’s leadership have become increasingly bellicose. Last week, Sergei Ryabkov, a deputy foreign minister and point person for negotiations with the United States, said that while Russia hoped for a diplomatic solution to the current crisis, “our arsenal for normalizing the situation” is significant.

“We are sure of the dependability of our defenses and in the ability of our armed forces to handle any task, so here there are no questions,” he said at a news conference.

Repeatedly, Russian officials have warned that any attempt by Ukraine to start military action against Russian-backed separatist forces in the Donbas region in eastern Ukraine would be met with force, with Mr. Putin recently accusing the Ukrainians of genocide.

There is no evidence Ukraine is planning such action, nor has there been any sign that the Ukrainian military was mobilizing troops in the face of the Russian buildup. Such accusations, though, have unnerved Ukrainian and Western officials, who say they fear that the Kremlin could be trying on different pretexts for an eventual intervention.

While Mr. Putin has given no indication of whether he will order new military action in Ukraine, the Russian military buildup is continuing. As of this week, according to the Ukrainian military, there were just over 100,000 troops parked within striking range of the Ukrainian border, along with more than 1,300 tanks, 1,800 pieces of artillery and Iskander-M missile batteries capable of launching rocket attacks deep within Ukrainian territory.

Much of the focus has been Russian troop movement in Ukraine’s east, along the border with two breakaway Ukrainian provinces, Donetsk and Luhansk, where Russian forces continue to support a bloody insurgency.

But perhaps more concerning, military analysts say, is a concentration of troops and equipment in the north and the northeast. In both places, the Russians have deployed a serious fighting force, backed up by logistics and support systems, experts say. These forces could be used to begin military action directed at Ukraine’s capital, Kyiv.

“If you push toward Kyiv and you’re outside the capital, this is not sustainable for the Ukrainian state,” said Robert Lee, a U.S. Marine Corps veteran and Ph.D. candidate at King’s College in London, who is a Russian military expert. “That’s why the forces in the northern part are the real concern.”