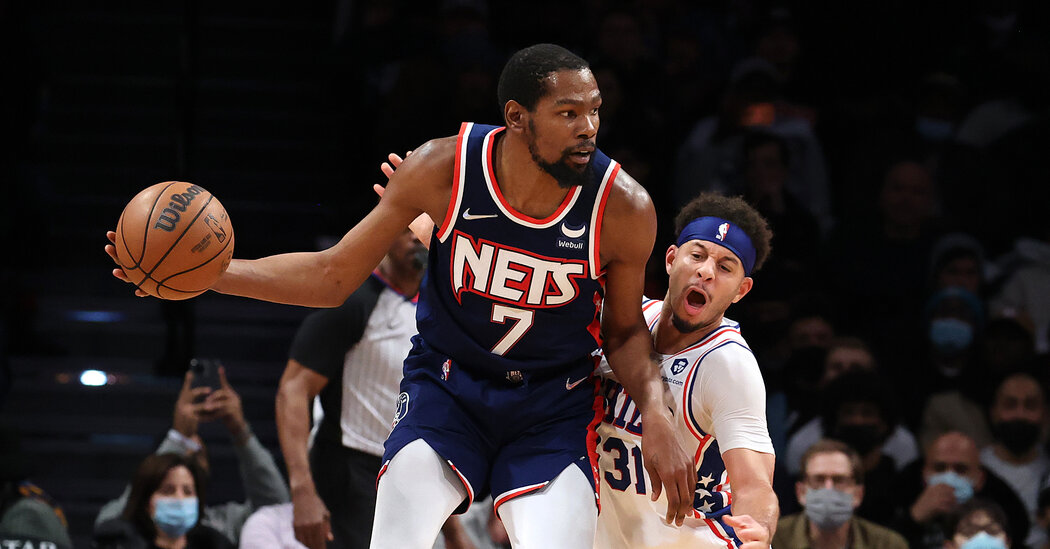 On Friday evening, the Nets announced they would allow Kyrie Irving, the star guard whom they barred from the team until he received a Covid-19 vaccination, to rejoin the team part time.

By Saturday afternoon, that plan was on hold: Irving, who remains unvaccinated, has entered the league’s health and safety protocols, his team said, part of a leaguewide spike in coronavirus-related absences.

Irving is only the latest Net on the team’s growing list of unavailable players. Earlier Saturday, the Nets confirmed that the star forward Kevin Durant had also entered the protocols and would miss Saturday’s game against the Orlando Magic in Brooklyn.

Durant and Irving became the eighth and ninth Nets players declared ineligible to play for virus-related reasons, a growing list of absences that has left the team in danger of not having enough players to compete. Under league rules, a team must have eight players suit up for a game.

It is unknown if Durant, Irving or any other Net has tested positive for the coronavirus. Players, coaches and team staff members do not have to test positive to be required to enter the league’s health and safety protocols: A close contact with someone who has tested positive or even an inconclusive result can make a player or coach subject to the rules about returning.

Once in the protocols, players cannot return to play until they have isolated for 10 days or returned multiple negative test results in a specified time period.

According to the league’s health and safety rules, Durant, who is vaccinated, can return after he records two negative tests at least 24 hours apart. Irving, because he is unvaccinated, faces much stricter rules before he is even allowed to practice.

The Nets had revealed their plans to return Irving to the team on a part-time basis in a statement on Friday evening, despite his continuing refusal to be vaccinated and even as coronavirus cases surge in New York City. Because of local health regulations, he will be eligible to play only selected road games, and none at all in New York.

The announcement was a surprising about-face for a franchise that had said in no uncertain terms earlier this year that it was not open to using Irving as a part-time player. New York City has since the summer mandated that employees and patrons of indoor dining, gyms and other similar establishments be vaccinated, which means Irving has for months been barred from playing home games at Barclays Center or even working out with his teammates without a valid medical or religious exemption.

Those rules also mean Irving is ineligible to play in games against the crosstown Knicks, and similar regulations will soon prevent him from taking part in road games against the Toronto Raptors. The Canadian government, beginning next month, will bar unvaccinated athletes from entering the country.

The Nets, who entered Saturday with a 21-8 record and in first place in the Eastern Conference, cited their high number of players in the league’s health and safety protocols as a justification for bringing back Irving. Sean Marks, the Nets’ general manager, said Saturday that the decision had been made in conjunction with the team’s players and coaches.

“At the end of the day, we’re sitting here faced with a roster that has been decimated over the course of the last several days and you know, I’m forced to make decisions.”

When asked if Irving would remain with the team if and when other Nets players return, Marks called that possibility “a little bit of a hypothetical.”

“I’m not sure what’s around the corner,” he said.

Nets Coach Steve Nash told reporters Saturday that he was “excited to have Kyrie back.”

“Obviously, he’s an incredible player,” Nash said. He said the decision to bar Irving from playing was initially one made in the interest of “continuity,” but he acknowledged Saturday that the growing number of Covid-related absences on the roster had led the team to revisit its decision.

“Frankly,” Nash said, “continuity has been thrown out the window.”

Marks said that he had not discussed Irving’s vaccination status with him. Irving has never discussed his status publicly, though team officials — in their statements and their actions — have confirmed that he is not vaccinated.

“I don’t think that’s being appropriate right now,” Marks said. “The times I’ve gone to see him, these are about forming bonds and forming friendships and having conversations about family.”

Irving’s potential return to the Nets is, at least outwardly, an awkward visual for the Nets and the N.B.A. In New York City, the pandemic has continued to rage with the arrival of the Omicron variant, and long lines now surround testing sites amid a surge in cases. Marks noted that he had personally seen hundreds of people standing outside Barclays Center in Brooklyn waiting to get tested.

“I hate to say it, it’s almost like we’ve gone back to six months, a year ago, unfortunately, with the cases rising,” Marks said.

While 97 percent of N.B.A. players are vaccinated and the league has run advertisements promoting vaccines, Irving remains the most visible vaccine holdout.

Both Marks and the Nets owner Joe Tsai had been steadfast in saying Irving would not be allowed to take the floor part time for the Nets unless he was vaccinated to comply with the city’s mandate. Tsai told ESPN in October that “it is just not tenable for us to have a team with a player that comes in and out, no home games, only away games.”

That same month, Marks told reporters: “Our focus, our coaches’ focus and our organization’s focus needs to be on those players that are going to be involved here and participating fully,” adding that “this is a choice that Kyrie had, and he was aware of that.”

On Friday, Marks changed his tune. “We look forward to Kyrie’s return to the lineup,” he said, “as well as getting our entire roster back together on the court.”