New cases slow in South Africa, suggesting its Omicron wave may have peaked. 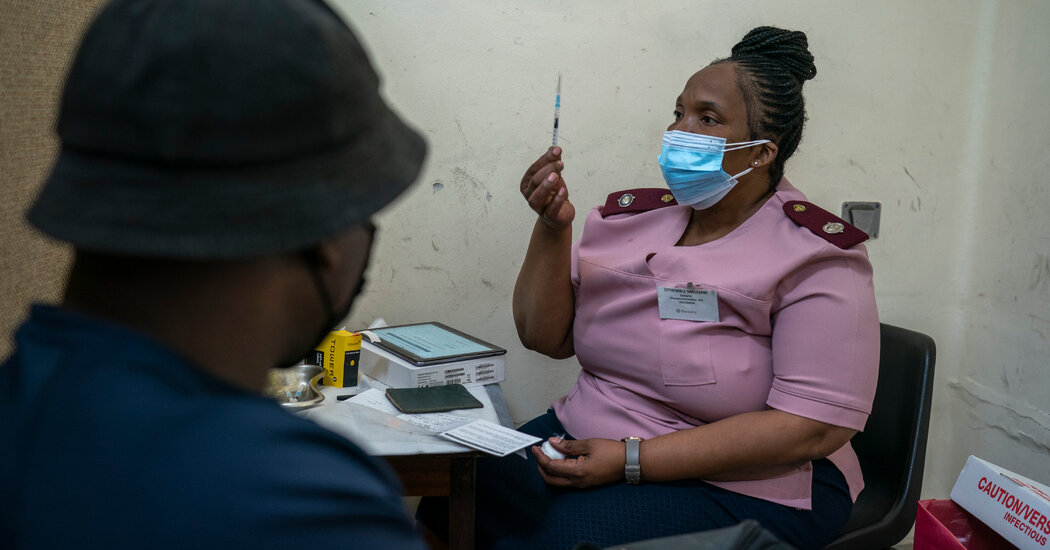 WASHINGTON — The Supreme Court said on Wednesday evening that it would hold a special hearing next month to assess the legality of two initiatives at the heart of the Biden administration’s efforts to address the coronavirus in the workplace.

The court said it would move with exceptional speed on the two measures, a vaccine-or-testing mandate aimed at large employers and a vaccination requirement for certain health care workers, setting the cases for argument on Friday, Jan. 7. The justices had not been scheduled to return to the bench until the following Monday.

Both sets of cases had been on what critics call the court’s shadow docket, in which the court decides emergency applications, sometimes on matters of great consequence, without full briefing and argument. The court’s decision to hear arguments on the applications may have been a response to mounting criticism of that practice.

The more sweeping of the two measures, directed at businesses with 100 or more employees, would affect more than 84 million workers and is central to the administration’s efforts to address the pandemic. The administration estimated that the measure would cause 22 million people to get vaccinated and prevent 250,000 hospitalizations.

The second measure requires health care workers at hospitals that receive federal money to be vaccinated against the virus. It “will save hundreds or even thousands of lives each month,” the administration wrote in an emergency application.

The Supreme Court has repeatedly upheld state vaccine mandates in a variety of settings against constitutional challenges. But the new cases are different, because they primarily present the question of whether Congress has authorized the executive branch to institute the requirements.

The answer will mostly turn on the language of the relevant statutes, but there is reason to think that the court’s six-justice conservative majority will be skeptical of broad assertions of executive power.

The last time the Supreme Court considered a Biden administration program addressing the pandemic — a moratorium on evictions — the justices shut it down.

“Our system does not permit agencies to act unlawfully even in pursuit of desirable ends,” the court said in August in an unsigned opinion, over the dissents of the three liberal justices.

In a statement on Wednesday night, the Biden administration vowed to vigorously defend the initiatives.

“Especially as the U.S. faces the highly transmissible Omicron variant, it is critical to protect workers with vaccination requirements and testing protocols that are urgently needed,” said Jen Psaki, the White House press secretary, adding: “We are confident in the legal authority for both policies.”

The vaccination-or-testing requirement for large employers was issued in November by the Labor Department’s Occupational Safety and Health Administration, or OSHA.

Employers are allowed to give their workers the option to be tested weekly instead of getting the vaccine, though they are not required to pay for the testing. The rule makes an exception for employees who do not come into close contact with other people at their jobs, like those who work at home or exclusively outdoors.

Under a 1970 law, OSHA has the authority to issue emergency rules for workplace safety, provided it can show that workers are exposed to a grave danger and that the rule is necessary.

States, businesses and religious groups challenged the measure in appeals courts around the nation, and a unanimous three-judge panel of the U.S. Court of Appeals for the Fifth Circuit, in New Orleans, had ruled in favor of some of the challengers, blocking the measure.

Last week, after the challenges were consolidated before the U.S. Court of Appeals for the Sixth Circuit, in Cincinnati, a divided three-judge panel reinstated the measure.

“The record establishes that Covid-19 has continued to spread, mutate, kill and block the safe return of American workers to their jobs,” Judge Jane B. Stranch wrote for the majority. “To protect workers, OSHA can and must be able to respond to dangers as they evolve.”

“The mandate is aimed directly at protecting the unvaccinated from their own choices,” she wrote. “Vaccines are freely available, and unvaccinated people may choose to protect themselves at any time.”

Almost immediately, more than a dozen challengers asked the Supreme Court to block the measure.

The second set of cases the court agreed to hear concerns a requirement that health care workers at hospitals that receive federal money be vaccinated against the coronavirus.

Federal judges in Missouri and Louisiana blocked the requirement, which has exemptions for people with medical or religious objections, in rulings that apply in about half of the states.

In the Missouri case, brought by 10 states, Judge Matthew T. Schelp ruled that the administration had exceeded its statutory authority in issuing the requirement and that it had not followed proper procedures in doing so. A divided three-judge panel of the U.S. Court of Appeals for the Eighth Circuit, in St. Louis, declined to stay that ruling while an appeal moved forward.

In the Louisiana case, brought by 14 states, Judge Terry A. Doughty blocked the requirement for similar reasons. Calling it a “close call,” a three-judge panel of the Fifth Circuit refused to issue a stay while the administration appealed.

The requirement, Solicitor General Elizabeth B. Prelogar told the court, was supported by “both science and common sense.”

“Requiring health care workers at facilities participating in Medicare and Medicaid to be vaccinated,” she wrote, “protects the health and safety of patients at those facilities by reducing their risk of contracting the virus that causes Covid-19.”

The Supreme Court had previously asked for responses to the emergency applications in the two sets of cases by Jan. 30, suggesting it would issue orders shortly afterward without hearing arguments. Its decision to do so followed a roughly similar move in challenges to a Texas abortion law. There, too, the justices scheduled arguments on an exceptionally expedited schedule.