On Cue, Skiing Re-enters the Spotlight Ahead of Olympics 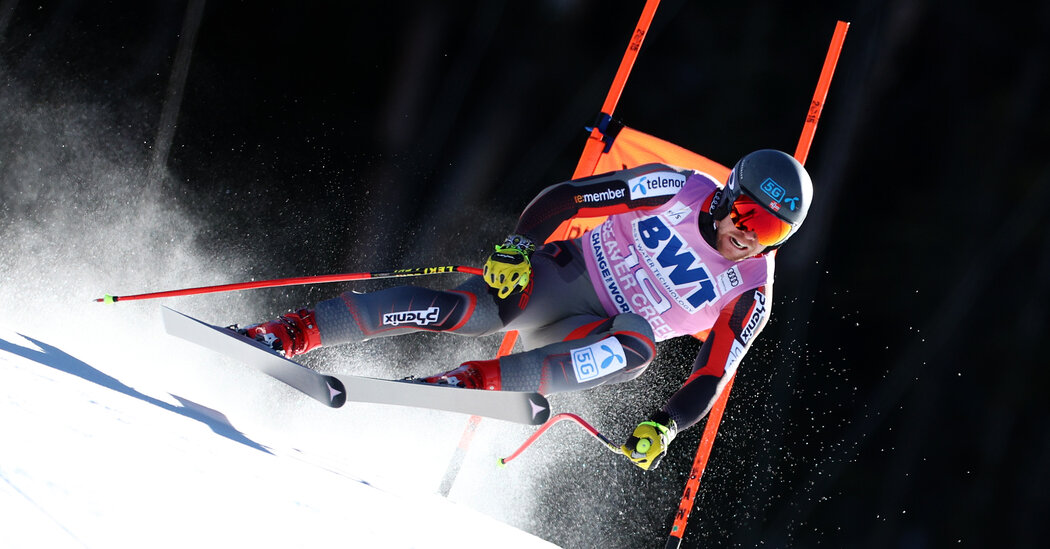 BEAVER CREEK, Colo. — Pretty much everywhere besides the Alps, ski racing tends to fly under the radar most of the time.

And then, every four years, an Olympic Games approaches, and with the flick of a switch, ski racers once more capture the imagination of anyone who catches a glimpse of the high-speed daredevilry that unfolds across Europe and North America in the winter escapade known as the “white circus.”

In an Olympic season, the prospect of the Games, and the glory and the riches it can deliver, tends to hover over every turn and spray of snow. Every result becomes a hint of who is rounding into form and who still has work to do and what might happen come early February when the eyes of the world lock in on this rarefied sport.

The men’s half of that roadshow landed in Colorado’s Rocky Mountains over the weekend for the series of races known as Birds of Prey, featuring the usual collection of speed hounds that many sport scientists count among the best all-around winter sports athletes. They hurl themselves down a nearly two-mile sheet of ice at speeds nearing 80 miles an hour on a couple of fiberglass composite sticks. Through the first three days of racing, they did nothing to dispel their daredevil reputations, with Aleksander Aamodt Kilde of Norway winning two of the first three races to reassert his claim as the best of the best even though he tore a knee ligament less than a year ago.

A second downhill, scheduled for Sunday afternoon, was canceled by high winds that could have wreaked havoc with the skiers, who sail through the air for as long as 50 meters, or over 54 yards, off some of the jumps here.

Kilde is the 2019-20 overall World Cup champion and half of a skiing power couple, as the boyfriend of Mikaela Shiffrin, one of the world’s top skiers, who has a chance to add an armload of medals at the Beijing Olympics. Shiffrin is a beloved local who makes her home one town closer to Vail, just a few ridges away. Though she struggled in her downhill race in Lake Louise this weekend in Alberta, Canada, she won her 71st World Cup race, and her 46th in slalom, in Vermont a week ago.

“She’s awesome,” Kilde said Saturday after shredding the downhill course to win by 66-hundredths of a second over Austria’s Matthias Mayer and reading a congratulatory message from Shiffrin. “We are good for each other.”

Looking for hints ahead of Beijing? Kilde and Shiffrin look poised to be the golden couple of the Games. NBC, the Olympic broadcaster in the United States, does love its golden couples.

That these races happened at all this weekend was something of a miracle. Despite scattered snowfall last month, the weather has been balmy in the Colorado mountains of late, with chilly nights and mornings giving way to bright, 50-degree afternoons. With the exception of a few runs, the mountains are mostly dull shades of green and brown.

Technicians spent weeks blowing man-made snow onto the course in a furious battle to build a suitable base and gain approval from skiing’s international federation inspectors to go ahead. It was touch and go until the final days, and hundreds of workers with picks and shovels labored long days to maintain the narrower than usual strip of snow for the race.

“Not as much terrain as we are used to,” said Ryan Cochran-Siegle, America’s top speed skier, who finished sixth in Saturday’s downhill, an encouraging result for someone whose previous season ended with a brutal crash and a broken neck.

While the Beijing Games are the short-term elephant on the ski hill, climate change is the long-term one. Ski racing cannot happen without cold temperatures and snow. Shorter winters are increasingly squeezing the beginning and end of the World Cup season and making summer training on high-altitude glaciers ever more precarious.

Gaming the weather became essential strategy the past several days, with the top racers vying to start early in the schedule before the course started to break down from a combination of sun, warming temperatures and ski edges.

Alpine skiing at the 2022 Olympics will take place in the Yanqing District, where it should be plenty cold but where it snows little and every flake will be man-made. The skiers actually prefer it that way, because man-made snow provides the kind of hard, densely packed and consistent surface they like and feel safest on.

They are less enthusiastic about traveling to a mountain where they have never competed in a host country with a government that has become increasingly authoritarian. There have been calls for boycotts of the Games and complaints against the International Olympic Committee for its embrace of China’s government, most recently amid Beijing’s reaction to sexual assault allegations made against a top Communist Party leader by the tennis star Peng Shuai.

“It’s a big problem, and I am not afraid to say it,” the Norwegian Kjetil Jansrud, 36, a five-time Olympic medalist, said after his 14th-place finish on Thursday. “As athletes, we are stuck in the middle.”

A day later, Jansrud had another problem to deal with when he crashed violently coming out of one of the course’s sweeping turns. He tumbled out of bounds at nearly 60 miles per hour, his skis helicoptering into the netting on one side of the slope.

The American men, who have been snakebit by injuries the past few seasons, mostly skied clean as they try to get back to the standard that now retired stars like Bode Miller and Ted Ligety set on the World Cup tour the past 15 years.

Travis Ganong, 33, a Californian who tore a major knee ligament a few years ago, registered the most encouraging result, finishing third in Friday’s super-G race.

“We needed that,” said Steven Nyman, 39, the team’s elder statesman, who is mounting a comeback from his own series of injuries. “You see a guy up there on the podium, it fires us all up.”

The Swiss and the Austrians, who generally rule this sport, don’t often need much firing up, but they have gotten their fair share the past few days. Marco Odermatt of Switzerland, a fast-rising 24-year-old, won the super-G on Thursday, took second on Friday and looks likely to carry on his country’s Alpine traditions.

And if the Olympics are near, then it is a safe bet that Mayer, one of the smallest skiers on the tour, will be finding his form, skiing in his trademark position like an upside-down U. Mayer was the downhill Olympic champion in 2014 and the super-G champion in 2018. Mayer finished second in Thursday’s super-G and was sitting in the leader’s seat for a good half-hour Saturday before Kilde knocked him out it.

“I brought my confidence from yesterday,” Kilde said after his second straight win. “A great feeling.”