On Ukrainian Front, Grinding War and Weary Anticipation of Invasion 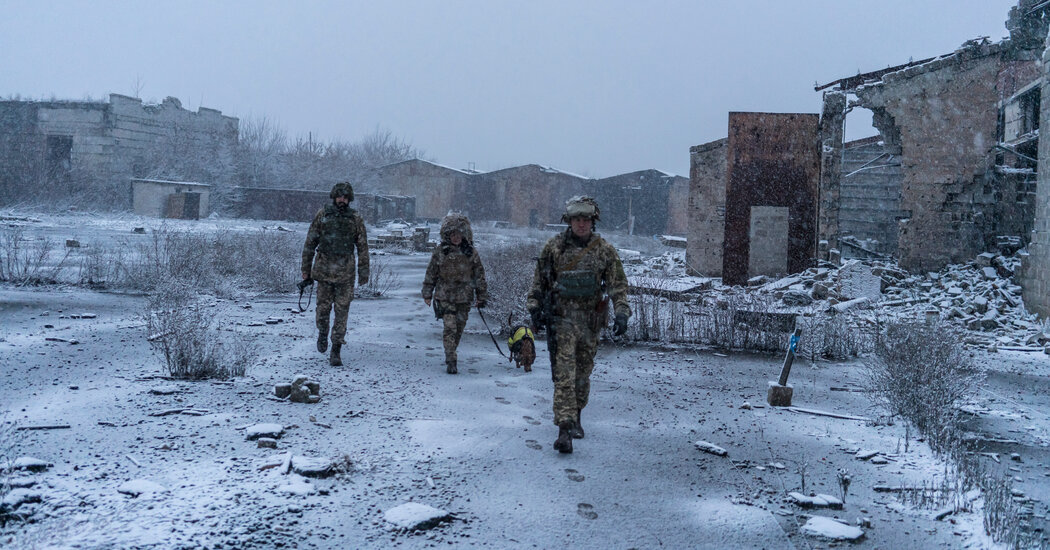 AVDIIVKA, Ukraine — Machine gun fire broke the stillness just after 8 p.m. when Capt. Denis Branitskii was midway through the evening patrol. The shots came in sporadic bursts and were close by, fired by Russian-backed separatists whose positions were obscured in the darkness. Only when the flash of a rocket-propelled grenade illuminated the newly fallen snow did Captain Branitskii break his stride, briefly pausing to take cover before moving on.

“This happens every night,” said Capt. Branitskii, a cleft-chinned company commander with the Ukrainian military’s 25th Airborne Brigade, positioned along the front lines in eastern Ukraine. “Sometimes it’s much heavier, sometimes it’s like tonight. Tonight, this is fine.”

This is what the war has been like for years, a slow, bloody grind that set in after both sides fought to a stalemate over territory seized by Russian-backed forces in 2014. Now Ukrainian and Western officials say something more ominous could be building.

In recent weeks, they have warned that Russia was erecting the architecture for significant military action, possibly even a full-fledged invasion. U.S. intelligence officials have assessed that Moscow has drawn up plans for a military offensive involving an estimated 175,000 troops to begin as early as next year. Recent satellite photos show a buildup in equipment, including tanks and artillery.

President Vladimir V. Putin of Russia has countered that it was the Ukrainians with their American and Western European backers who were instigating a war, citing what he calls security threats to Russia, including NATO exercises in the Black Sea.

Amid mounting anxiety, Mr. Putin and President Biden will speak by video conference on Tuesday. The White House said Mr. Biden would “reaffirm the United States’ support for the sovereignty and territorial integrity of Ukraine.”

Mr. Putin has made his position clear. “It is not we who are threatening anyone,’’ he said last week, “and accusing us of this, given the reality on the ground, or as we say to shift the blame from the person who’s sick in the head to the healthy one, is at minimum irresponsible.”

For the fighters dug into an ant farm of muddy trenches on both sides of the conflict in Ukraine, talk of a new war might seem puzzling. For them, the old one never ended. A 2015 cease-fire between the Ukrainian government and the Russian-backed forces in two separatist enclaves brought an end to the most serious hostilities in a conflict that has cost more than 13,000 lives. But it did not bring peace.

What is known as the “line of contact” separating the two sides regularly crackles with gunfire punctuated with the occasional boom of artillery. A handful of Ukrainian soldiers is killed each month, mostly by sniper fire. There were seven in September, two in October and six in November. Last week, a 22-year-old soldier named Valeriy Herovkin became the first killed in December.

So far, soldiers on the front lines said they had seen little evidence of escalation beyond this largely slow-moving war of attrition. Compared with the vicious fighting that preceded it, this is a holiday, several soldiers said.

But after eight years in the trenches there is a weary acceptance that the status quo cannot last forever, that the Russian military, which dwarfs their own in power and wealth, will likely come sooner or later. If that moment is now at hand, they said, so be it.

“I studied at university and my head is screwed on right, so I recognize perfectly well the danger the Russian army presents, and that no one can guarantee that Putin or anyone else won’t suddenly say, ‘Forward!’” said First Lt. Ivan Skuratovsky, a stoic, 30-year-old father of two who has been fighting since the war broke out in 2014. “We’re prepared for this turn of events because this is our job and none but us is in a position to confront this threat.”

“Are we scared of an open offensive?” he added. “I just don’t see that in people.”

The soldiers are on heightened alert anyway, aware that in this period of explosive tensions, an errant bullet or mortar shell could be all that is needed to touch off a serious escalation. Even when fired upon, they are under strict orders not to respond unless absolutely necessary.

On the night I joined Capt. Branitskii on patrol, forces under his command returned fire only once. “Just to let them know we’re here,” Captain Branitskii said. The thwomp of a Ukrainian soldier’s grenade launcher silenced the machine gun fire on the other side, but only briefly.

“This really annoys the soldiers that we’re not allowed to respond,” said Lieutenant Skuratovsky.

Since August, the 25th Airborne Brigade has been posted to an area on the outskirts of the Ukrainian town of Avdiivka known as the Promzona, a base built into the skeletal remains of a tire factory. The site of nasty fighting at the start of the war, the factory complex is now eerily silent save for the rush of wind through bullet strafed passageways and the banging of loose metal sheeting.

It abuts a neighborhood of country cottages, most just burned out shells now. The houses were abandoned quickly and long ago. Children’s toys can be seen scattered in some yards and the offspring of left-behind family pets prowl the overgrown gardens.

Snipers are a constant menace, and the walls of frontline positions are posted with photos of the gruesome injuries suffered by those who dropped their guard.

Viewed through a hand-held periscope, the landscape on the other side appears post-apocalyptic with blown out houses set amid thickets of twisted, leafless walnut trees. Only an occasional puff of smoke from a wood-fired stove gives away the separatists’ locations.

Though the fighters on the other side are no more than a few dozen meters away in some places, the Ukrainian soldiers confessed to knowing little about them. The dislike for their enemy is severe though these were once citizens of a united country. “These are the lowest strata of society who have not been able to find themselves in any other profession,” said Lt. Tatyana Zaritskaya, a former kindergarten teacher who joined the war effort in 2014.

Another company commander, Oleksandr Timoshchuk, has studied his opponents from his perch in a corner of a factory building about 50 yards from where they’re positioned. He said three or four times a month, probably around payday, “they start up the discothèque,” get drunk and take pot shots at his position.

A separatist “gets wasted, steps outside probably to relieve himself, tosses a grenade and goes back in,” he said.

The Ukrainian military has made significant progress since 2014, when it nearly disintegrated in the face of a lightning operation by Russian forces to seize territory, first by annexing the Crimean Peninsula and then by fomenting a separatist takeover in the provinces of Donetsk and Luhansk.

Ukrainian troops have since fought alongside NATO forces in Afghanistan and Iraq and trained with American military advisers.

If a full-on attack comes, Ukrainian forces are as ready to face it as they’ve ever been, said Gen. Oleksandr Pavlyuk, commander of the Joint Forces Operation battling the separatists. But even this, he acknowledged, will not be enough to hold off the Russian military without significant assistance from western countries, specifically the United States.

Some military analysts have said that, faced with a full invasion by vastly superior forces, Ukraine would at best manage an organized retreat. General Pavlyuk cited the many citizens in Ukraine with military experience and suggested the conflict might evolve to something akin to insurgency, with Ukrainians fighting the Russians block by block and house by house.

But the war would take a disastrous toll.

“This is a beast who has tasted blood,” General Pavlyuk said. “Believe me, the losses are going to be horrible on both sides — thousands, tens of thousands, hundreds of thousands. On their side and ours.”

For those on the front charged with paying attention, there is a subtle but palpable change in the air even if unnoticed by regular soldiers.

“In the last month or month and a half everything has become more frequent,” said a masked and helmeted military intelligence commander who would only give his name as Ilya. “Shelling is more frequent, from both artillery and small arms. Drones have started flying more often and if before they did not drop bombs, now they’ve come up with a system for doing so.”

Ilya’s team had turned the inside of a bombed-out apartment into an observation post on the front lines near the town of Marinka, 35 miles from Avdiivka. A section of the wall is still decorated with the former owner’s pink wallpaper, but the living room window has been blown out and is now reinforced with sandbags and covered with green mesh netting. This vantage gives Ilya and his team an expansive view of their opponent’s positions.

All was quiet. Or so it seemed.

“Don’t lean out too much, there might be a sniper,” Ilya warned. “Just two days ago, a guy was shot and didn’t make it.”