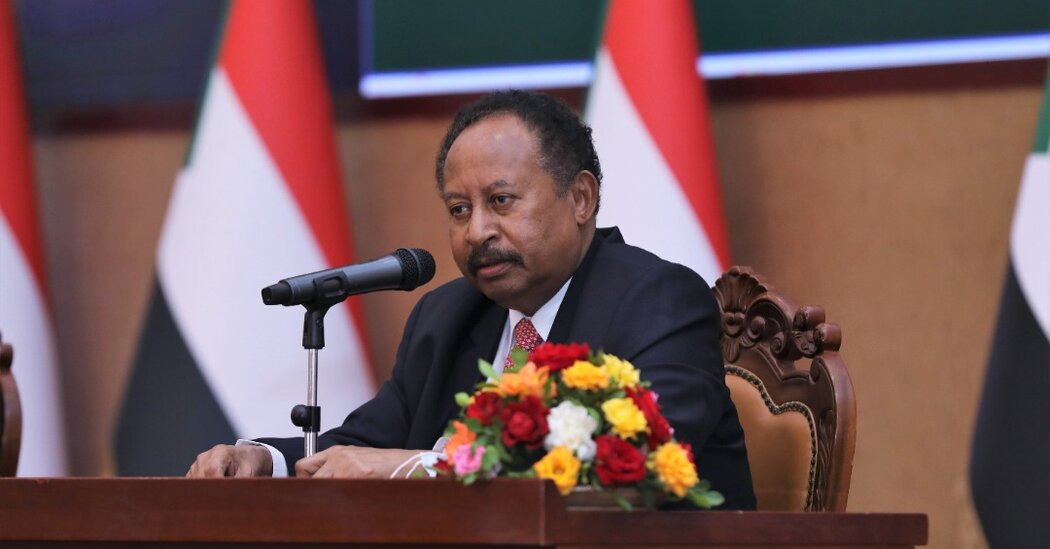 NAIROBI, Kenya — After four weeks under house arrest, Sudan’s ousted prime minister was reinstated on Sunday after he signed a deal with the military intended to end a bloody standoff that led to dozens of protester deaths and threatened to derail Sudan’s fragile transition to democracy.

At a televised ceremony in the presidential palace, Prime Minister Abdalla Hamdok appeared alongside Lt. Gen. Abdel Fattah al-Burhan, the army chief who ousted him from power on Oct. 25, and signed a 14-point agreement that both men hailed as an important step forward.

“We must put an end to the bloodshed,” said Mr. Hamdok, referring to the protesters killed by the security forces in tumultuous anti-coup protests that swept the capital, Khartoum, and other Sudanese cities in recent weeks.

But the deal met with a wave of anger on the streets, where vocal critics slammed it as an unacceptable concession to a military that has controlled Sudan for 52 years of its 60-year history and that is likely to severely hamper efforts to move the country toward democracy.

Jeering protesters massed outside the palace where Mr. Hamdok and General al-Burhan signed the deal and clashed in other parts of the city. Police officers fired tear gas and live bullets.

The Umma party, Sudan’s biggest, rejected the deal before it had even been signed, as did the Forces of Freedom and Change, a civilian coalition that shared power with the military until the coup.

“Hamdok preferred to become the secretary of a dictator over a symbol of an emancipatory movement,” said Magdi el-Gizouli of the Rift Valley Institute, a research body in East Africa. “Whoever marketed this as realpolitik underestimated the depth of the desire for change, and a new future, among the new generation in Sudan.”

It was devastating, Mr. el-Gizouli added, to watch young Sudanese being shot to death by the security forces in recent weeks, “and to compare that with the bankruptcy of the geriatric political class assembled in the ruler’s palace on the Nile.”

Soon after he spoke, Sudan’s main doctors’ body announced that a 16-year-old boy had been fatally shot in the head during demonstrations in Khartoum on Sunday. It brought to 41 the number of protesters killed in the past month.

Mr. Hamdok did not participate in the protests, but was appointed to lead Sudan through a transitional period of three to four years, as part of a civilian-military power-sharing agreement, until democratic elections could be held. Relations between Mr. Hamdok and General al-Burhan were never easy. The generals always seemed reluctant to cede power to civilians who might endanger the privileges and economic power they had accrued over 30 years of al-Bashir rule.

On Oct. 25, a coup led by the military derailed Sudan’s transition to civilian rule and plunged the country back into fear and uncertainty.

But when General al-Burhan seized power last month, he appeared to have drastically overplayed his hand. The United States and other Western countries hit back with loud criticism, freezing aid and debt relief programs worth billions of dollars at a time when Sudan is struggling through a punishing economic crisis.

The military was also outmaneuvered by Mr. Hamdok, who resisted pressure to return to power in a diminished capacity that would allow the military to dominate the transitional process and, ultimately, shape the outcome of any future election.

In recent weeks when protesters clashed with the police in the streets, they hailed Mr. Hamdok as a hero for resisting the military they despised.

But when Mr. Hamdok reappeared on Sunday, wearing a suit and tie and seated beside the military officers who had imprisoned him at his home for nearly a month, he was in danger of being cast as a villain.

When he accepted the job of interim prime minister, Mr. Hamdok said at the signing ceremony Sunday, “I realized that the road would not be strewn with roses.” But he spoke only obliquely of his ordeal, preferring to point to the path ahead. “By joining hands, we can all reach a peaceful shore,” Mr. Hamdok said.

General al-Burhan, who stood up, clutching a baton, paid tribute to Mr. Hamdok and promised Sudanese citizens that he would continue with the political transition “until your dreams of democracy, peace and justice are realized.”

Mr. Hamdok will be allowed to form his own government, said a Western official familiar with the negotiations who spoke on the condition of anonymity to discuss delicate issues. But important points of contention between the two sides have not been finalized, including crucial arrangements for sharing power, the official said.

Jonas Horner, a regional analyst with the International Crisis Group, said that the deal announced on Sunday appeared to weaken the standing of Sudan’s civilian cabinet significantly as the country moves toward an election.

Sudan’s military has sought to weaken the democracy transition from the start in 2019 and, paradoxically, felt threatened by tentative signs of an economic recovery in the months leading up to the coup, Mr. Horner said.

“There had been clear progress, shoots of economic success, that showed civilians could govern,” he said. “That was disconcerting for the military.”

Other factors were at play, too. Analysts say General al-Burhan was also under growing pressure from inside his own ranks, from senior officers who threatened to oust him as army chief if he failed to upend, or at least reconfigure, the power-sharing arrangement with civilians.

There was also considerable disquiet in military ranks at the government’s decision to send Mr. al-Bashir to stand trial at the International Criminal Court in The Hague on decade-old charges of war crimes and crimes against humanity over his role in atrocities in the western Darfur region in the 2000s.

If Mr. al-Bashir is convicted of war crimes, military officers who served under him during that period, including General al-Burhan, could also be exposed to charges. Mr. Hamdok’s return to power — apparently under the thumb of generals who are willing to use force to impose their will — could place the United States and its allies in an awkward position.

Having loudly demanded the reinstatement of Sudan’s civilian prime minister, they need to keep the democratic transition on track but not reward what Mr. Horner called a “thinly veiled military government.”

Turmoil and protests are likely to continue, he added. “Hamdok was a bit of a political hero until a few hours ago,” he said. “Now people will turn on him.”