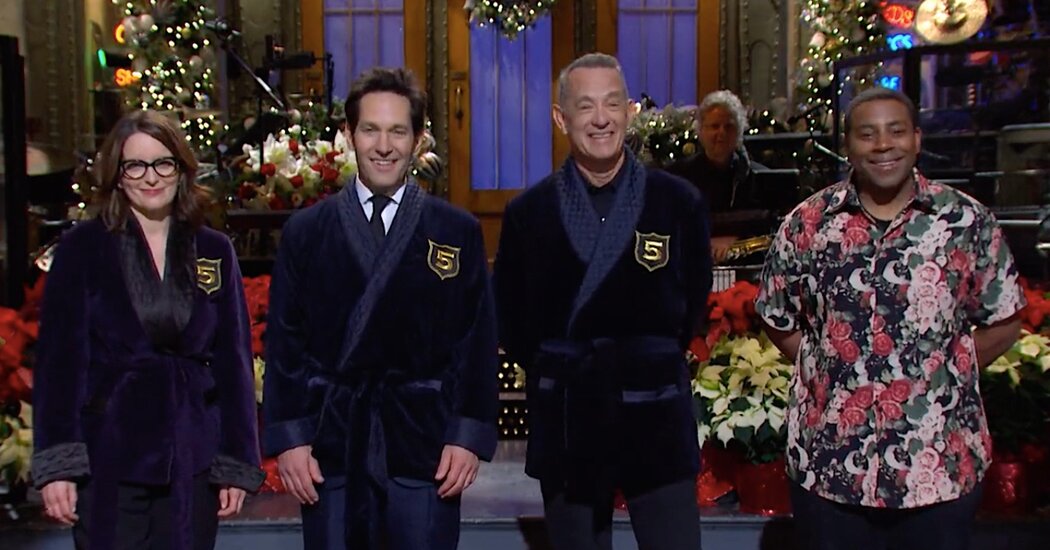 In a week when the rapid spread of the Omicron variant of the coronavirus had disrupted Broadway shows, concerts, sports and numerous other entertainment events, “Saturday Night Live” inevitably found it challenging to broadcast live from New York.

Hours before a year-end holiday “S.N.L.” episode that was to be hosted by Paul Rudd and feature the musical guest Charli XCX, NBC suddenly announced several changes to this sketch variety show’s familiar format: citing “an abundance of caution,” the network said on Saturday afternoon that “S.N.L.” was pulling its live audience and would have “limited cast and crew.” A short while later, Charli XCX said that she would be unable to perform on the program at all.

Even so, “S.N.L.” tried to persevere, as it has throughout the pandemic. The onset of the coronavirus had forced the cancellation of several live broadcasts in its 2019-20 season, which the show finished out with episodes consisting of sketches its cast members recorded from their home quarantines. Since the beginning of the 2020-21 season, in October 2020, “S.N.L.” has aired a full run of live shows from its Manhattan home in Studio 8H in 30 Rockefeller Plaza with many new protocols in place but little apparent interruption.

But this week’s episode, which offered a mix of new segments filmed earlier in the week and vintage sketches from past years, was bound to come across differently. As Rudd told viewers at the end of the night, “I know it wasn’t the Christmas show that you expected but that’s the beauty of this place. Like life, it’s unpredictable.”

However, the first performer to cross the show’s threshold tonight was a surprise guest: The opening sketch, which took place on the Studio 8H stage with no set, began with Tom Hanks, who was wearing his smoking jacket from the Five-Timers Club.

Hanks offered his gratitude to the program’s “surviving crew members,” adding that it was his intention to induct a new member into the club tonight “but Covid came early this year,” he said.

Though many “S.N.L.” cast members would be absent, Hanks said, “I came here from California, and if you think I was going to fly 3,000 miles and not be on TV, you’ve got another thing coming.”

He was joined by Tina Fey, an “S.N.L.” alumna, who explained that this was not the smallest audience she had ever performed for, “because I have done improv in a Macy’s,” she said.

When Rudd entered, he glanced into the studio audience and said brightly, “I’m extremely disappointed.” He was nonetheless inducted into the Five-Timers Club by Kenan Thompson, one of only two current cast members to be seen onstage tonight. (The other was Michael Che.)

Rudd then explained to viewers that the rest of the show would feel “a little bit like that new Beatles documentary: a lot of old footage but enough new stuff that you’re like, OK, yeah, I’ll watch that.”

Commercial Parody of the Week

It may be long and shaggy and constructed of variations on, basically, just one joke. But after the week that just transpired, how can you not be charmed by Aidy Bryant and Kate McKinnon as two senior moms (and frequent customers at HomeGoods) whose participation in a TV commercial boils down to telling its director (Rudd), over and over, the truth about what they really want for Christmas? (It’s grandchildren, by the way. They want grandchildren.)

Unexpected Scorsese Homage of the Week

Many of Pete Davidson’s sketches now are about the fact that Pete Davidson is Pete Davidson, and still this latest one proved to be a worthy entry in that surprisingly abundant genre.

Beginning with a sendup of the bookend segments from “Raging Bull,” this mostly black-and-white film imagines an aging Davidson in the year 2054, with a gut and a receding hairline, now the star of a meager nightclub act in which he tries to recapture his past “S.N.L.” glories. (At least things appear to have turned out better for him than they did for his pal Machine Gun Kelly.)

Weekend Update Jokes of the Week

In what had to be the loosest, most low-fidelity production of Weekend Update since the Chevy Chase era, the news-satire segment this week featured Che and Fey sitting on the stage in directors’ chairs as they read jokes to Rudd, Hanks and Thompson. (Fey explained that, though she was filling in for the regular co-anchor Colin Jost, “It’s not what you think — he’s having work done.)

Among the highlights from their routine:

Che: “Well, it’s Christmas, so let’s start with some good news, Tina. O.J. Simpson has been released from parole two months early because of good behavior. Said O.J., ‘I can’t believe I got out of parole early but I did it. I did it.’”

Fey: “Time magazine has named Elon Musk ‘Person of the Year.’ You can read more about it on your phone while your Tesla is self-driving you into a lake.”

Che: “It was revealed that on January 6, three Fox News hosts all texted Mark Meadows to urge him to get Trump to call off his supporters. And you know you’ve gone too far when Fox News is like, somebody better calm these white people down.”

Vintage Sketch of the Week

Several of the classic sketches resurfaced tonight were tried-and-true “S.N.L.” Yuletide gems, like “D*** in a Box” and “Christmastime for the Jews.” But then there was this curveball: a 1990 segment called “The Global Warming Christmas Special,” which if nothing else proves that, like climate change, the show’s predilection for bits in which its cast members play random celebrities is not a recent phenomenon.

Watch for impersonations of Carl Sagan, Dean Martin, Sally Struthers, George Hamilton and many more. And see if you can keep it together when the late, beloved “S.N.L.” stars Phil Hartman and Jan Hooks walk onstage to perform a duet, as Isaac Asimov and Crystal Gayle.