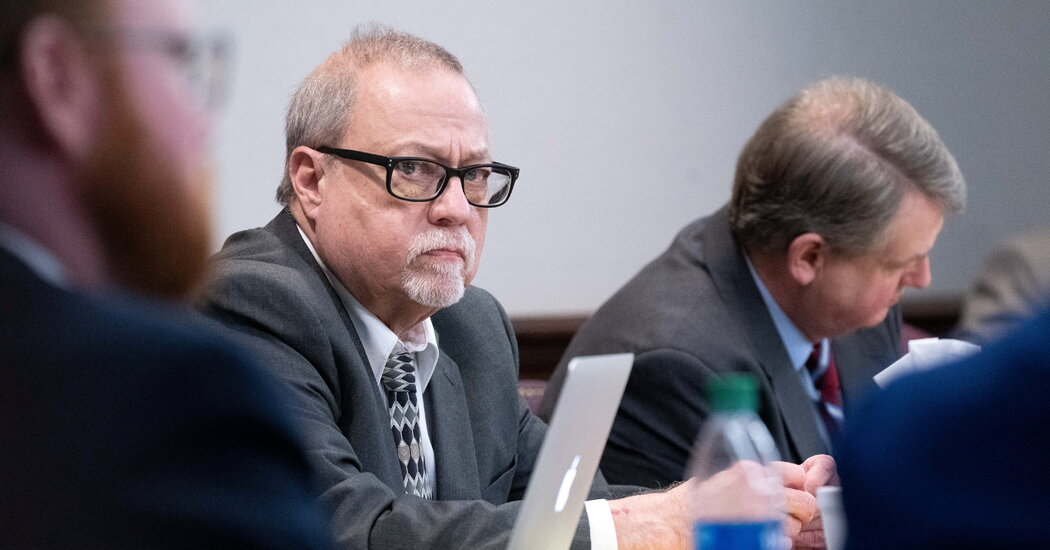 BRUNSWICK, Ga. — Federal prosecutors in the hate crimes trial of Ahmaud Arbery’s three murderers on Wednesday presented the jury with voluminous digital evidence of racism, as the government continued to build its case that the defendants, who are white, chased Mr. Arbery through their South Georgia neighborhood because he was Black.

Amy Vaughan, an intelligence analyst with the Federal Bureau of Investigation, walked the jury through text messages and social media posts by two of the defendants, Travis McMichael and William Bryan, calmly reading bigoted language so harsh that the prosecutor Christopher J. Perras issued a warning to people in the courtroom gallery before she began. None of the racist statements specifically mentioned Mr. Arbery. But prosecutors are hoping that they will help convince the jury that racism motivated the trio to pursue him.

The prosecutors’ strategy about how they would use this evidence in service of their goal became clearer on Wednesday. They plan to show the men’s racist words were too frequent to be considered slips of the tongue. They have taken pains to note that some of the language was used within days or months of Mr. Arbery’s killing. They have emphasized not only racist remarks, but expressions of support for vigilantism: The jury learned that roughly five months before the killing, Gregory McMichael, 66, Travis McMichael’s father and the third defendant in the case, posted a meme on Facebook that said, “A gun in the hand is worth more than the entire police force on the phone.”

And in the case of Travis McMichael, they have introduced evidence that he not only disliked Black people but wished them dead. In one instance, after a friend sent Travis McMichael, 36, a video of a Black person playing a practical joke, Mr. McMichael responded by using a racist epithet and saying he would kill the person who made the joke.

The three men have already been convicted of murdering Mr. Arbery in state court and sentenced to life in prison, with only Mr. Bryan given the possibility of parole. In the federal case, which started on Monday, they also face up to life in prison for the charges against them, which include attempted kidnapping and, in the case of the McMichaels, separate weapons charges.

Mr. Arbery, 25, lived a couple of miles from the men’s Satilla Shores neighborhood outside of Brunswick. On the day of his death, he had jogged there and walked onto the site of a house under construction, as he had many times before. The McMichaels, who suspected him of break-ins in the neighborhood, began chasing Mr. Arbery, who was unarmed, in their truck. Mr. Bryan soon joined the chase. None of the men called the police until the end of the five-minute pursuit, when Gregory McMichael called 911 just before his son shot Mr. Arbery three times with a shotgun.

In the federal trial, the fate of each man could differ, given the extent of the government’s evidence against them. No evidence has emerged that Mr. Bryan, 52, expressed a desire to harm Black people, although he repeatedly referred to his daughter’s Black boyfriend using a racist slur, including four days before the killing.

No evidence was introduced on Wednesday that showed Gregory McMichael using racial slurs. But in June 2016, he posted a meme to social media that stated, “White Irish slaves were treated worse than any other race in the U.S.,” followed by vulgar language that contrasted the Irish with other racial or ethnic groups who demanded “free” things.

Prosecution witnesses from the F.B.I. and the Georgia Bureau of Investigation have noted that they were unable to retrieve data from Gregory McMichael’s cellphone.

Understand the Killing of Ahmaud Arbery

The shooting. On Feb. 23, 2020, Ahmaud Arbery, a 25-year-old Black man, was shot and killed after being chased by three white men while jogging near his home on the outskirts of Brunswick, Ga. The slaying of Mr. Arbery was captured in a graphic video that was widely viewed by the public.

The victim. Mr. Arbery was a former high school football standout and an avid jogger. At the time of his death, he was living with his mother outside the small coastal city in Southern Georgia.

In opening statements on Monday, Bobbi Bernstein, another U.S. Department of Justice lawyer, indicated that the government planned to call a former co-worker of the elder McMichael who would discuss an anti-Black tirade Mr. McMichael went on after the death of the civil rights leader Julian Bond. Ms. Bernstein said that Mr. McMichael said he wished that Mr. Bond had “been put in the ground years ago.”

One question that has emerged in both the state and federal trials is whether Mr. Arbery had committed any crime during his multiple visits to the house under construction. The house had no walls or door at the time, and there is no evidence he stole or damaged property there. On Tuesday, an agent with the Georgia Bureau of Investigation said he did not think the visits even amounted to trespassing.

On Wednesday, prosecutors showed a video that Travis McMichael had made in which he described his plans for a hog hunt. The video shows a “No Trespassing” sign on a property, and Mr. McMichael knocking it down as he walks past it. A month later he called the police to report that Mr. Arbery was trespassing at the house under construction.