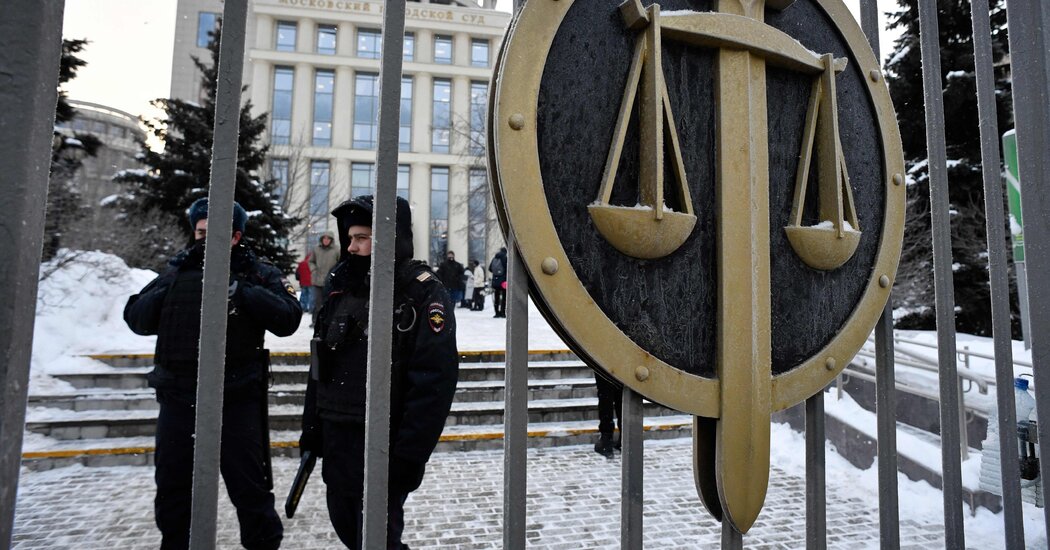 MOSCOW — A Moscow court ordered the closure of one of the country’s most prominent human rights groups on Wednesday, a day after its parent organization was also shut down in verdicts that, for many Russians, served as a painful coda to a year marked by the erosion of civil rights and freedom of expression.

The ruling by Moscow’s City Court will close the Memorial Human Rights Center, which keeps a tally of political prisoners. On Tuesday the country’s Supreme Court ordered the shuttering of Memorial International, which was founded in 1989 by Soviet dissidents to preserve memories of Soviet repression.

Together, the shutdowns reflected President Vladimir V. Putin’s determination to control the narrative of some of the most painful and repressive chapters in Russian history and keep dissidents at bay. Since January, the Kremlin has accelerated a campaign to stifle dissent, clamping down on independent media, religious groups and political opponents.

Memorial’s list of political prisoners now stands at 435 names — twice as many as the government acknowledged in the late Soviet period. Prosecutors accused the human rights group of justifying “international terrorist and extremist organizations” by including on its list imprisoned members of religious groups such as the Jehovah’s Witnesses.

That list includes Aleksei A. Navalny, a prominent opposition leader, who was poisoned with what Western intelligence agencies believe is the Russian-made nerve agent Novichok.

Prosecutors said the group promoted “biased materials on human rights topics” that were used to discredit “the structure of the Russian Federation.” They said members of the organization had “participated in all protest movements,” and “supported all protests aimed at destabilizing the country,” including Mr. Navalny’s Anti-Corruption Foundation.

Prosecutors also accused the group of failing to comply with a 2012 “foreign agent” law, the same reason the Supreme Court gave on Tuesday in closing down Memorial International. The law requires designated organizations to meet onerous financial reporting rules and to add a disclaimer to all public communication warning that it was produced by a “foreign agent.”

The human rights center was named a “foreign agent” in 2013, shortly after the law came into effect, while Memorial International, its parent group, was designated as such in 2016.

The targeting of the organization’s historical archive and human rights center at the same time was proof that “the goals are political,” according to Ilya Novikov, a lawyer for Memorial.

“The state is not comfortable with how the human rights center assesses its activities,” he said during the proceedings.

Grigory Vaypan, a lawyer for Memorial, said this week’s proceedings were reminiscent of absurd Soviet show trials against dissidents. He mentioned the 1975 case against Sergei A. Kovalev, who in 1969 helped set up the Action Group for the Defense of Human Rights in the U.S.S.R. For his human rights work, Mr. Kovalev served seven years in strict prisons and then spent three years in “internal exile” in the Soviet Far East.

“We have already gone through this,” he said. “Today’s accusation is exactly the same as the accusations against Soviet dissidents.”

“The people of Russia — and the memory of the millions who suffered from Soviet-era repression — deserve better,” said Mr. Blinken in a statement.

In Moscow, the chairman of the security committee in the Lower House of Parliament welcomed the decision and denounced Western criticism.

“Washington and Brussels are defending precisely the activities of Memorial and its numerous structures that can be used against Russia,” the committee chairman, Vasily Piskarev, told reporters.

“We are again being told what to do and how,” he said. “Russia is open to an equal dialogue, but does not accept dictates from abroad and attempts to impose on us its truth and a distorted view of the events of the past and present.”

Memorial has accepted money from foreign donors but its employees deny any accusations that they serve interests of foreign powers. Outside the courtroom on Wednesday, several dozen people protested against the ruling, yelling “Shame!”

Memorial plans to appeal both verdicts, and to find legal ways to continue its human rights work and archive preservation through its 60 affiliate organizations across Russia.

“We may be closed,” Mr. Cherkasov said, but added that Russians’ interest in human rights would not go away.

“Memorial is not an organization or a public movement,” Memorial International said in a statement on Tuesday. “Memorial is Russian citizens’ aspiration to know the truth about the plight of millions of people. No one can shut down that aspiration.”