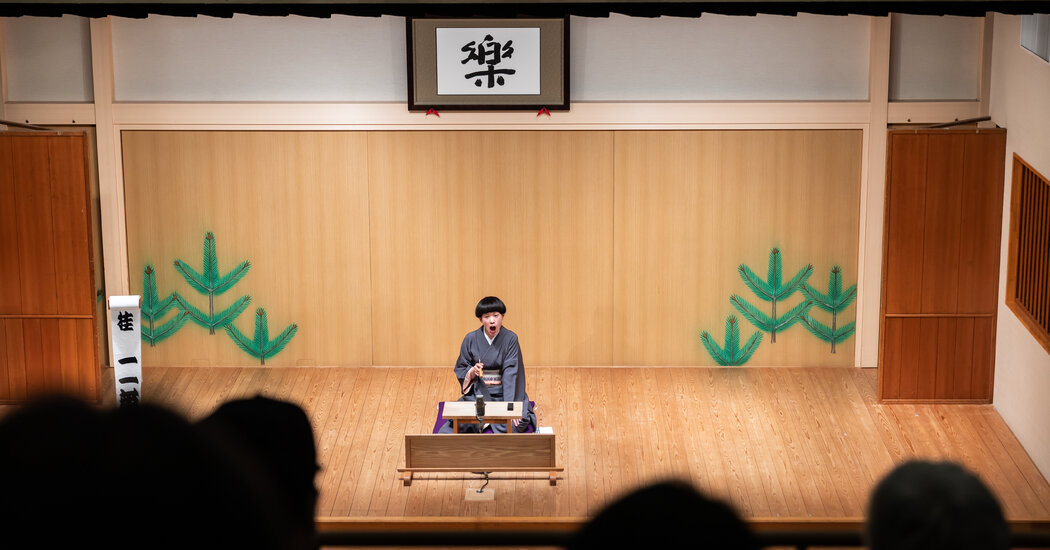 OSAKA, Japan — Onstage, Niyo Katsura wore a delicate pink kimono. With her petite frame and high-pitched voice, she could pass more easily for a college undergraduate than a 35-year-old performer of one of Japan’s oldest comedic arts.

Yet when she reached the point in her routine where she impersonated a drunken salesman — a middle-age man — the audience laughed heartily as the character slurred his words and stabbed himself in the arm in a raucously unsuccessful effort to show off the medicinal properties of a mysterious oil.

Ms. Katsura’s uncanny ability to portray a range of drunks and fools, many of them men, has brought her acclaim in rakugo, a classical form of Japanese comedic storytelling. Last month, she became the first woman to win a prestigious prize for rakugo newcomers in the award’s 50-year history.

After taking the trophy, Ms. Katsura proclaimed, “Do you see me now, old men?”

Over the nearly three-century existence of rakugo, the slapstick cousin of Japanese stage arts like kabuki and noh, most of its performers have been men who portray multiple characters of both genders. Since women entered the profession just over 40 years ago, they have faced resistance from fellow artists, critics and audiences. Women represent just one in 16 of the close to 1,000 rakugo artists now working professionally.

Ms. Katsura’s victory was a milestone not only because of her gender, but also because she performed a traditional story featuring all-male characters. Some earlier female performers, in an effort to woo audiences unsettled by women acting as men, converted male protagonists in classical stories into women.

But Ms. Katsura was determined to tell the old stories the way they were originally conceived. “I wanted to perform rakugo the exact same way that men do,” said Ms. Katsura, who received a perfect score from all five judges on the competition panel, sponsored by NHK, the public broadcaster. “I feel that history has been changed.”

Rakugo is an oral tradition in which stories — about 600 of which are in circulation among performers today — are passed down by masters to apprentices. The art form has strict rules: Performers remain seated on a cushion in the center of a largely bare stage, and they use very few props, such as a folding fan or a cotton hand towel.

Stories range from about 10 to 30 minutes and feature dozens of characters, all of whom are conveyed by changes in facial expression, voice and movements of the body above the waist.

“I have never seen anything as good as her version of the story she performed,” said Kenichi Horii, a cultural critic who watched Ms. Katsura’s prizewinning act. “For the audience, you just want it to be fun. You don’t necessarily care if the performer is male or female.”

Growing up in Osaka, Ms. Katsura — who was born Fumi Nishii and uses a stage name — was raised by parents who were not legally married, which is unusual in Japan. The household was less rigid about gender roles than more traditional families.

While studying Buddhist art in college in Kyoto, she attended live rakugo performances. Her favorite characters reminded her of class clowns whom teachers punished. “I thought, these people are saying foolish things and people are openly laughing at them,” she said. “I was very drawn to that.”

She could see it was tough for women onstage. When a woman performed, “the audience wouldn’t laugh.” She read a book by a well-known rakugo artist who wrote that women made audiences “uncomfortable.”

After graduating, she sought out a mentor willing to take her on for training. The first time she stood outside the dressing room door of Yoneji Katsura, a seasoned rakugo practitioner in Osaka, Japan’s comedic capital, he told her he would not accept any women as apprentices. The second time she asked, he refused again.

“I could not believe that such a strange girl wanted to be my apprentice,” recalled Mr. Katsura, 64. “I had no confidence that I could raise a female apprentice.”

He recalled seeing her regularly at his performances, often sitting in the front row. He said he even heard a voice from above, urging him to take a chance on her. The third time Ms. Katsura came knocking, the veteran performer agreed to let her observe his other apprentices practice.

For about six months, while working part time at a supermarket, she visited Mr. Katsura’s home and sat in on rehearsals. In 2011, Mr. Katsura formally accepted her into a three-year apprenticeship and gave her the stage name “Niyo,” which means two leaves. She also took on the family name that he had inherited from his mentor.

But even though he recognizes her gifts, Mr. Katsura is not certain women really belong in the rakugo world. “The basis of rakugo is that it is an art form that men should perform,” he said.

To Ms. Katsura, it is only logical that “if men can perform women, then women should be able to perform men.” Over time, she adopted a signature gender-neutral bowl haircut that fans call “the mushroom.” Yet she never resorts to lowering her voice to play men or using other techniques she believes would strike a false note.

The year before she won the NHK competition, she was a finalist. One judge told her she needed more life experience to give texture to her performance.

Over the summer, Ms. Katsura contracted the coronavirus. She was frightened but wondered if it might somehow deepen her art. “Maybe this is a bad thing to say, but I thought, maybe I am one step closer to being a good rakugo performer because I am experiencing this feeling that I never had before,” she said.

After her winning performance last month, Gontaro Yanagiya, the judge who had given her the harshest feedback, said he cried with joy to see Ms. Katsura’s progress. “It was like she came back just to shove that performance in my face,” Mr. Yanagiya said.

Ms. Katsura acknowledged that she had reached the heights she had because of the women who came before her.

Tsuyu no Miyako, 65, who is widely acknowledged as the first woman to succeed in modern rakugo, recalled how male colleagues would tell vulgar stories about women or slap her on the buttocks. She said she learned to slap back, but mostly had to accept the treatment.

“I just thought that was the world I signed up for,” Ms. Tsuyu said.

Onstage in Osaka earlier this month, Ms. Katsura told two stories, including a 30-minute classical tale about a father who orders one of his craftsmen to search for a prospective romantic interest for his lovesick son.

In Ms. Katsura’s hand, a folded fan became a sword, a pair of chopsticks and a long smoking pipe. With a roll of her shoulders, she evoked the slouching walk of a man, and with a stroke of her chin, she evinced a beard.

At one point, Ms. Katsura invited a veteran male artist, Hanamaru Hayashiya, 56, to join her onstage. She told him that certain common words in traditional rakugo stories now sounded sexist. The word often used for wife, “yomehan,” for example, combines the Chinese characters for “woman” and “house.”

“I don’t think these words fit the world we are living in now,” Ms. Katsura said.

“Words are very difficult,” Mr. Hayashiya said. “I guess this shows that rakugo is a man’s world.”

In the dressing room after the show, Ms. Katsura folded her kimonos and reflected briefly on her performance.

“They were a good audience,” Ms. Katsura said. “They laughed.”