Stay or Go? For Myanmar’s Latest Wave of Refugees, There’s No Good Choice. 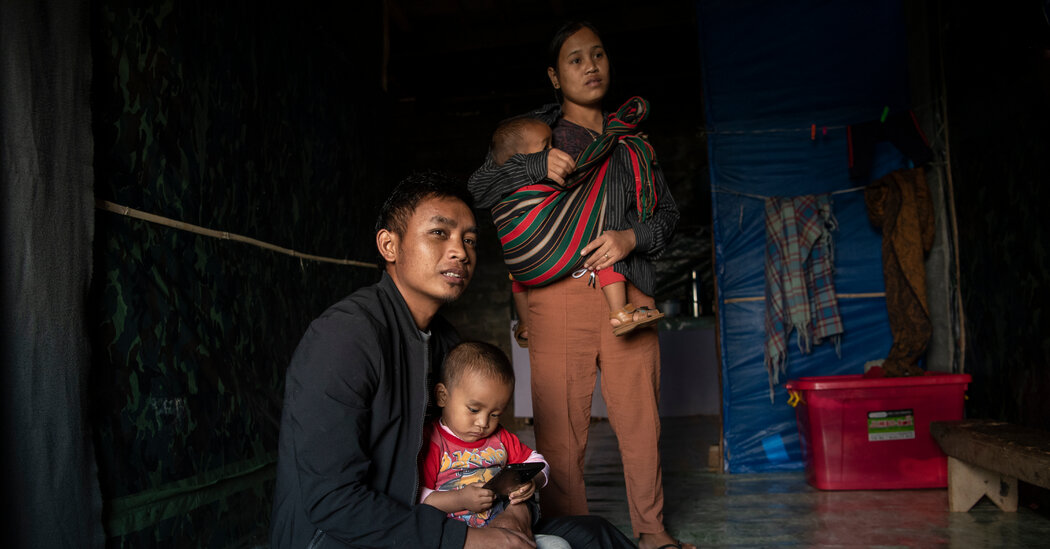 He was already preparing to leave when the gunfire erupted without warning. The soldiers were shooting at civilians and burning down homes, again.

In a panic, Biak Tling stuffed two days’ worth of clothes into a backpack and fled. He covered 220 miles over two days on his motorbike, eventually making his way across a narrow suspension bridge from his strife-ridden home of Myanmar into the relative refuge of India.

A week earlier, he had sent his wife and three young children on a similar journey. “Take care,” he told them. “And wait for me.”

Across Myanmar, hundreds of thousands of people have fled their homes, trying to escape the violence and bloodshed since the military seized power in a coup on Feb. 1. Many are living in tents in the jungles of Myanmar. Some, like Mr. Biak Tling, have left their homeland entirely, pouring into neighboring countries.

For those who stay, it is a fight to survive. The junta has created a humanitarian crisis in Myanmar that is worsening by the day, according to rights groups. Soldiers are blocking aid convoys, keeping critical food and supplies from the people who need them. Children are dying because they have not been able to get medical help.

For those who leave, it is a life in limbo. Many are struggling to adapt to a place they don’t quite know, a government that doesn’t quite welcome them, and a future with no certainty. India does not recognize refugees, so they are unable to get assistance, legal status or jobs.

“We escaped from the mouth of hell, but we are lost,” said Mr. Biak Tling, 31, who was a clerk in a church before he fled.

The ranks of the displaced are swelling as the country sits on the precipice of civil war between armed protesters and the military. More than 1,300 people have been killed by the junta, according to a rights group. The military was accused over the weekend of massacring at least 35 villagers in Kayah State, including women and children.

In the northwest, the Tatmadaw, as the military is known in Myanmar, has deployed thousands of troops in what appears to be a concerted push to crush the resistance.

One group of protesters killed more than a dozen soldiers, prompting the troops to retaliate. They fired rockets into villages, destroying homes, churches and an office belonging to Save the Children, a British aid organization.

By late September, all of the town’s roughly 10,000 residents had left.

Like most refugees from Chin State, Mr. Biak Tling headed to India’s Mizoram State, which shares a porous border with Myanmar. The residents of Mizoram and Chin share the same forefathers; many in Mizoram have family ties with the Myanmar refugees. For decades, Chin people moved back and forth to visit family, conduct business or escape religious persecution.

They usually returned home — until now.

The Chin are a predominantly Christian ethnic minority who live in western Myanmar. Like many minorities in the country, they had suffered decades of repression and discrimination under previous governments dominated by the Buddhist Bamar majority.

Soldiers abducted men from homes, forcing them to dig trenches and carry supplies for the camps that they built in the state. They occupied churches, imposed travel restrictions on preachers and prevented Christian gatherings.

While Chin people have long sought safety in India, the current exodus has outpaced any previous flight. In just months, roughly 30,000 people have crossed the border, a level of migration that in the past was spread over two decades, according to Salai Za Uk Ling, the director of the Chin Human Rights Organization.

After the coup, the first wave were protesters, politicians and dissidents, followed by government workers who had gone on strike, military defectors and then tens of thousands of civilians. Some were grandparents and toddlers who journeyed for days in the jungles.

Daniel Sullivan, the senior advocate for human rights at Refugees International, said he saw parallels between the current crisis and the mass exodus of 700,000 Muslim Rohingyas into Bangladesh in 2019.

“It’s going to be a future in limbo,” said Mr. Sullivan. “I do think some level of displacement is going to last for several years.”

In the decade before the coup, life was peaceful for Mr. Biak Tling and his family.

In 2020, he moved with four of his siblings into a four-bedroom house that his father, Hei Mang, had built. Mr. Biak Tling, whose name means “Perfect Worship” in Chin, was the fourth of six children.

Then on Aug. 25, about 150 soldiers entered Thantlang and shot at the Chinland Defense Forces, an armed group of protesters. A 10-year-old boy was killed when a mortar shell fired by the troops landed on him. More than a dozen homes were destroyed. Mr. Hei Mang dug a bunker for his family in his garden. They called it “the pit.”

The junta sent more soldiers into Thantlang, which continued to be rocked by fighting. During one overnight episode, the family stayed inside the pit until 5 a.m. the next day.

On Sept. 7, Mr. Biak Tling learned on Facebook that the National Unity Government, established by a group of deposed leaders, had declared a “people’s war” against the junta.

Fearing that things would get worse, he told his family they had to flee. The plan was for his wife to leave first with their young children — a 5-year-old boy and 18-month-old twins.

His father, Hei Mang, 70, chose to stay in Myanmar and return to his birthplace, a village called Aibur, to live with another son. He felt that he and his wife were too old to make the journey. More than 223,000 people have been internally displaced since the coup, according to the United Nations High Commissioner for Refugees.

In Aibur, Mr. Hei Mang lives in government housing with his son, Bawi Zahu, who was a civil servant. After the coup, Mr. Bawi Zahu, 33, walked off his job as an employee in the General Administration Department, joining thousands of others who had stopped work in protest against the coup.

With no income for 10 months, the family has been forced to ask neighbors for food.

“Now we are alive, but it’s no different from being dead,” Mr. Hei Mang said.

Rights groups say the junta is preventing humanitarian aid from reaching hundreds of thousands of people displaced in Myanmar. The troops have blocked roads and aid convoys and attacked health care workers, according to Human Rights Watch. Children are malnourished, and at least nine have died because of acute diarrhea in central Rakhine State.

In some parts of Chin State, residents have trouble getting access to drinking water and toilets. In Magway Region, children are getting skin disease. In Kayah State, four babies died in June and September because the junta has blocked medical aid, according to Ko Ba Nya, the spokesman for the Karenni Human Rights Group.

The United Nations estimates that the number of people needing assistance will rise to 14.4 million by 2022, from 1 million before the coup. By next year, about 25 million people, half the population, could be living below the national poverty line.

Understanding the Coup in Myanmar

Ms. Aung San Suu Kyi faces years in prison. On Dec. 6, a court sentenced her to four years in a closed-door trial that the U.N. and foreign governments have described as politically motivated. While this initial sentence has since been reduced to two years, Ms. Aung San Suu Kyi is facing a series of rulings that could keep her locked up for the rest of her life.

Médecins Sans Frontières has warned that the delays in getting access to medical care could be life-threatening for patients with conditions requiring regular care, such as H.I.V., tuberculosis and hepatitis C.

Mr. Hei Mang’s medicine for his anemia and vitamin deficiency are fast running out; so is his wife’s hypertension medication.

“All the buses coming into Chin State have to pass the gates guarded by the military, who check everything in the vehicles,” Mr. Hei Mang said. “They take everything they want, including medicine.”

Biak Tling now lives in the hilltop village of Farkawn, along with hundreds of people from the Chin State, in a house with a blue tarp roof and corrugated metal walls that he built himself.

He is doing the same for his fellow refugees, including Tial Sang, 20. He and his family left their village, Chincung, after days of explosions and gunfire, the nightmarish cacophony of the conflict between the resistance fighters and the military forces.

“We were too afraid to die so we decided to come here,” Mr. Tial Sang said.

The government of Prime Minister Narendra Modi, fearing the economic strain, had instructed the four northeastern states bordering Myanmar to not accept refugees from the country. Guards were told to seal the border and prevent entry.

In an interview, Pu H. Rammawi, a senior official in Mizoram, said he told officials from the Home Ministry and Foreign Ministry that the locals would not accept such a decision.

“They are our brothers and sisters,” Mr. Rammawi said. “We cannot betray them. If they go back, they will be killed.”

For now, the border guards are letting the refugees cross. The government declined to comment, but referred to questions raised in Parliament by Mizoram officials.

Though the government of Mizoram has offered children schooling and Covid-19 vaccinations, officials are limited in what they can do. Mizoram is one of the poorest states in India, and because the Indian government has no formal refugee policy, international aid organizations haven’t been able to provide shelter and food.

Mr. Rammawi said he has asked the central government for humanitarian assistance. The refugees, he said, need proper housing because they are in a cyclone-prone area.

They are mostly left to fend for themselves.

Mr. Biak Tling had never built a house before. He had graduated with a bachelor’s degree in history from Kalay University in Myanmar and another bachelor’s degree from the Northern Institute of Theology Seminary in New Delhi.

Mr. Biak Tling was recently appointed secretary of the refugee committee. He collects money from the refugees to donate to families in need.

His wife, Tial Hoi Chin, 29, cried a lot in the beginning.

His 5-year-old son cries, too. Classes at his new school are in Mizo, a language he doesn’t know. He misses his friends.

Without money, they struggle to find food and are surviving on rice, potatoes and beans. They huddle around the fireplace because the days are cold.

But at least in India, they do not have to hide from the soldiers. They are safe and free.

Mr. Biak Tling and his fellow refugees know that returning to Myanmar is impossible the way things are now. But they can’t help wishing.

“I don’t know what our future will be like,” he said. “I just want to go home and live peacefully with my family.”