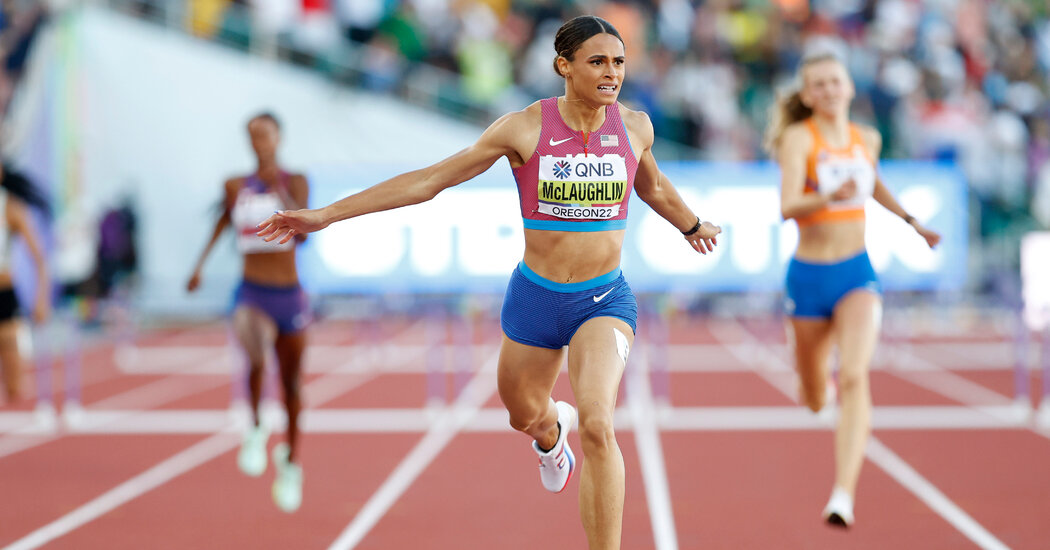 There was a time, not so long ago, when Sydney McLaughlin was challenged whenever she planted herself in the starting blocks for the 400-meter hurdles. She knew she would face stiff competition from the likes of Dalilah Muhammad, a graceful runner with an impressive list of achievements.

For the past couple of years, however, McLaughlin has lifted herself to a different level. She has repeatedly smashed the world record to smithereens, rendering her rivals — none of them slouches — into background noise as she pushes the boundaries of what seems possible in her profession.

Already the reigning Olympic gold medalist, McLaughlin on Friday night broke the world record for the fourth time in two years, demolishing a deep and decorated field in 50.68 seconds to win her first world championship.

Femke Bol of the Netherlands was second in 52.27 seconds, and Muhammad finished third in 53.13.

For the indefinite future, McLaughlin’s only real battle appears to be with the clock: When will she break the world record next?

Some context might help. Consider that McLaughlin would have defeated two of the women who advanced to Friday’s 400-meter final — while clearing 10 hurdles. (Yes, you read that correctly.) Consider, too, that she trimmed 0.73 seconds from her previous world record, which she had set 27 days earlier at the U.S. championships.

Most absurd of all? McLaughlin sees room for improvement.

“I think we’re all figuring out that, yes, there are 10 barriers, but we can run them a lot faster than people think,” she said, adding: “I still think that wasn’t even a super clean race.”

Undefeated in the 400-meter hurdles since 2019, when she finished second to Muhammad at the world championships in Doha, Qatar, McLaughlin, 22, has emerged as one of track and field’s most dominant athletes in a discipline that should be one of its most competitive.

Muhammad, who used to own the world record until McLaughlin came along, is an Olympic and world champion. And while injuries have interrupted her training, she is still a fearsome athlete at 32.

“I was kind of nervous, honestly, going into this meet, not knowing where my fitness level would be,” Muhammad said. “So to get a medal shows my resilience as an athlete.”

But there is still a gap between McLaughlin and Bol, one that was evident as early evening shadows fell across the track at Hayward Field and McLaughlin opened up an enormous lead by the halfway point. Her romp down the homestretch might as well have been a victory lap. No one was close to her.

“I would definitely say it’s a flow state,” she said, “where you’re putting everything that you’ve done in practice into the race to the point where you’re just letting your body do what it does.”

McLaughlin, who grew up in central New Jersey and was a teenage prodigy at Union Catholic High School, is quite simply the fastest women’s 400-meter hurdler in history. After breaking Muhammad’s world record in 2021 at the U.S. Olympic trials, McLaughlin broke it again a few weeks later when she won gold at the Tokyo Olympics. Muhammad finished second in both races.

Last month, McLaughlin seemed fairly impassive when she lowered the record again, running 51.41 seconds at the U.S. championships. Muhammad, who had an automatic bid to worlds as the defending champion, chose not to compete.

In the run-up to the world championship final, McLaughlin was primed for another extraordinary performance. On Wednesday, she demolished the field in her semifinal heat, slowing several meters from the finish to win in 52.17 seconds, which would have been the world record just three years ago.

As for the future, McLaughlin said she would discuss her options with her coach, Bobby Kersee, at the end of the season. She left open the possibility that she could compete in the 400 meters or the 100-meter hurdles — or some combination of events. In any case, there are more championships to chase and records to break.

“My coach thinks there’s a lot more to be done,” she said.