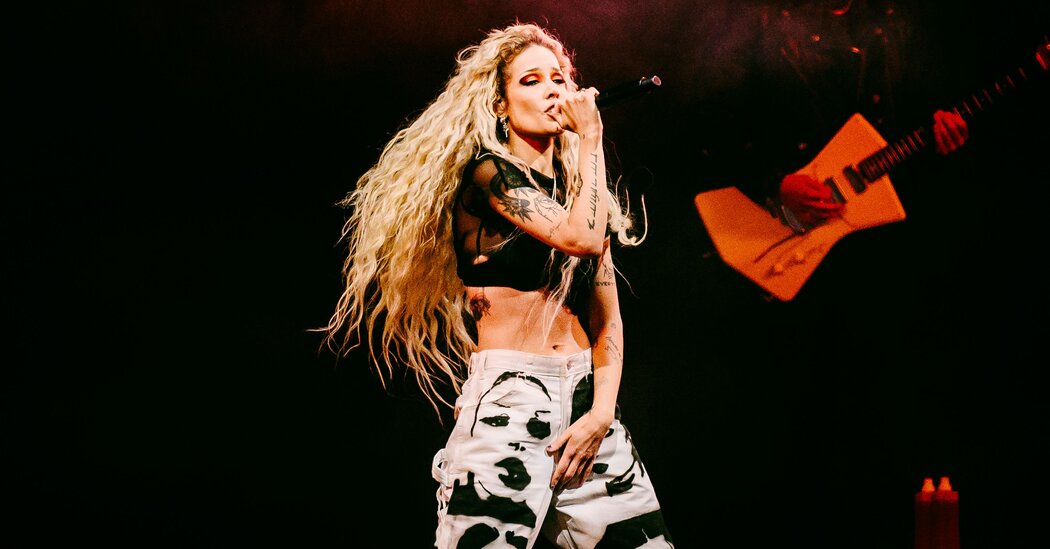 In a TikTok post last month, the singer Halsey shared a message with fans: “basically i have a song that i love that i want to release ASAP,” the musician wrote, “but my record label won’t let me.” Despite eight years in the music industry and over 165 million records sold, Halsey said, “my record company is saying that i can’t release it unless they can fake a viral moment on tiktok.”

Several other artists had recently expressed similar frustrations with labels forever chasing the next “Old Town Road” or “Drivers License” — singles that took off on TikTok and climbed the Billboard charts. “All record labels ask for are TikToks,” FKA twigs wrote in a since-deleted post on the platform. Florence Welch, Doja Cat and Charli XCX have also referred to their labels’ TikTok fixations. (A little over a week after Halsey published the TikTok video, which became its own “viral moment,” Capitol Records announced in a Twitter post addressing the artist that it was “committing to a release of ‘So Good’” on June 9. “We are an artist-first company that encourages open dialogue,” the label said in a statement. “We have nothing but a desire to help each one of our artists succeed, and hope that we can continue to have these critical conversations.”)

Complaints from recording artists about promotional demands are as old as the music industry itself, and they have often played out in public feuds. But these recent grievances aren’t targeted at the labels themselves. They are direct appeals to fans (in Halsey’s case, 4.6 million of them on TikTok). And while they describe highly specific scenarios — world-famous artists in disputes with their labels over marketing strategies — they also evoke an experience familiar to just about anyone with a presence on social media, where aspects of the experience of fame have been formalized and made available to everyone.

All of which is to say: Being told how to market yourself isn’t just a celebrity problem anymore. It’s a basic condition of being online.

Cogs in the Machine

One way to think of contemporary pop stars is as de facto social media influencers. Some relish the chance to commune with fans online, and many found fame there first (including Halsey). Others are less enthusiastic, but understand that their fans — or their labels — appreciate an authentic online presence. All of this situates their complaints about TikTok within a more recent tradition: calling out social platforms.

Like musicians, professional social media influencers sometimes find themselves at odds with their business partners. They, too, are under contract with large firms on which they depend for their livelihood and sense of self-worth, and which aren’t shy about making demands.

YouTube creators, for instance, depend on the platform for publishing, maintaining a relationship with their audiences, payment and distribution. For all but the largest creators, YouTube’s management style is indirect. Its suggestions and demands are delivered, instead, through policies, extensive and frequently updated guidelines for creators, and direct prompts in its interfaces. Another way YouTube reaches its creators is through its analytics dashboard, which provides them with constant feedback from Google about how they’re performing within the Google ecosystem.

Popular art has often referred to the conditions under which it was produced, and musicians’ most dedicated fans have always gotten the picture one way or another — that their favorite artists are stressed about sales, or insecure about reviews, or unhappy with the conditions in their industry, or mad at their label. On YouTube, however, fans don’t have to look for clues. Across the vast spectrum of YouTube content types, creators are frequently vocal about the job of being a creator on the platform. Subscription milestones are openly pursued and marked, and fans are routinely thanked — in direct and personal terms — for their support.

Rising YouTubers, be they makeup tutors, comedians, product reviewers or political essayists, speak directly to viewers about their goals and progress: how many subscriptions it would take for them to quit their day jobs; how it would help them if you bought merchandise; and to subscribe, comment and turn on new video notifications. They talk about how hard they work, what the job demands, what the platform wants and what it gives back. Even casual YouTube viewers eventually become familiar with growth-related jargon: C.P.M., copyright strikes, view velocity, demonetization. In the long run, every YouTube channel is about YouTube, at least a little.

The closest comparison to how recording artists might talk about their labels is how a YouTuber might refer to “the algorithm” — a shortcut for talking about the unspoken instructions the platform gives them. This is often infused with creator folk theories that combine YouTube’s official guidance with patterns gleaned from individual successes.

YouTubers share, and critique, the demands they believe YouTube makes of them: to post very frequently; to maximize “watch time” at all costs; to engage with new features, like YouTube Shorts, whether or not creators or their fans are drawn to them. They have criticized the company for offering advice about how to avoid burnout while leaving them feeling uncertain about the material consequences of taking a break from posting. While some of these videos are addressed at YouTube directly, most seem to be seeking recourse by appealing to fans, who, by collectively watching more or engaging in different ways, can actually materially change a YouTuber’s situation. It’s a familiar but modified message: We’re in this app together.

TikTok, which has quickly become a major cultural influence, is assertive even by industry standards. It’s an environment in which users are subjected to constant nudges and suggestions about how to engage and what to post, one where complaints from famous artists about incessant marketing interventions don’t sound so out of touch or unreasonable.

It’s also an environment where folk theories of the algorithm abound, particularly about what it takes to show up on other users’ feeds, known as “For You” pages. In a coming paper, the researchers Elena Maris, Hibby Thach and Robyn Caplan suggest that on TikTok, users have organized to draw attention to, and to try to influence, the opaque ways in which not just attention but actual money is distributed on the platform. (In December, TikTok introduced new monetization tools for creators, including a tipping feature.)

“With TikTok, we see this move from folk theories of algorithms to folk theories of compensation,” said Ms. Caplan, a senior researcher at Data & Society, a nonprofit research organization. An awareness of TikTok’s priorities — what it demands, and how it assigns worth — “is something that’s seeping into the general population of users,” she said.

Perhaps it has been for a while. Millions of people can understand the tension of using Instagram with different potential audiences in mind (say, friends and family) or with a sense of professional liability (for instance, people who works for themselves, or in industries where a professional reputation is tied to an online presence). Noticing that your numbers are lower than usual and wondering what other people are doing that you’re not are widely shared experiences, as is dismissing, or heeding, a recommendation about the newest feature or trend on a platform: Instagram Reels or Close Friends; Twitter Spaces; YouTube Shorts; TikTok avatars. Haven’t posted in a while? Expect a notification about it, or 20.

In 2022, you don’t have to be a famous musician to get unwelcome recommendations from audience research, unsolicited instructions about how best to promote your brand, or regular updates on how many people are into your latest release. Joining a social network for personal reasons only to find yourself using it for material ends is, in fact, the standard experience. To bring it up, even as a world-famous recording artist, isn’t just a bid for sympathy from fans on social media — in a small way, it’s an attempt to relate.

For Context is a column that explores the edges of digital culture.