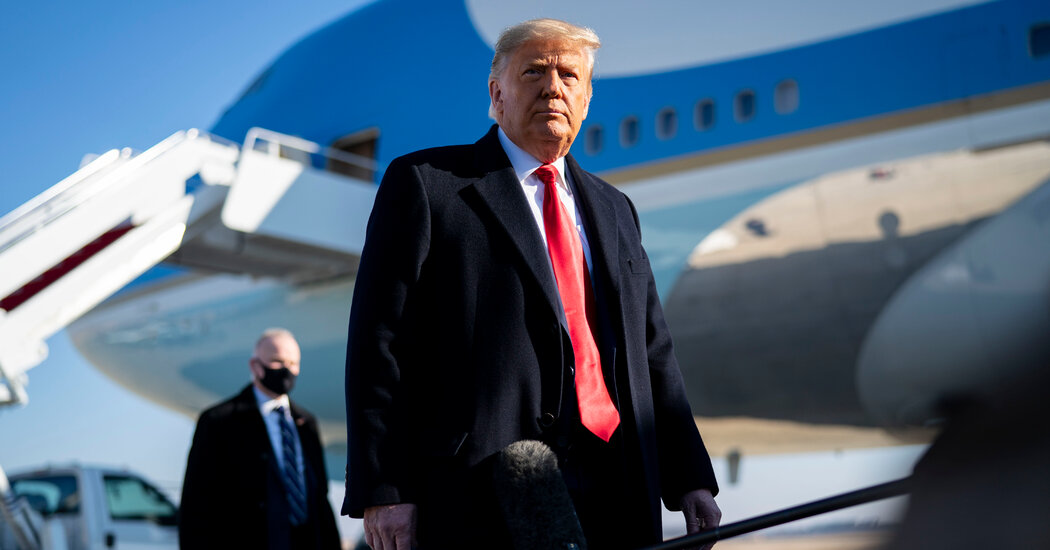 The Manhattan district attorney, Cyrus R. Vance Jr., has run out of time.

Even as prosecutors in his office have ramped up their long-running investigation into former President Donald J. Trump in recent weeks, Mr. Vance is set to leave office soon without seeking criminal charges against Mr. Trump.

Mr. Vance, a three-term Democrat who declined to seek re-election this year, will hand the inquiry over to his successor, Alvin Bragg, on Jan 1. And Mr. Bragg, a former federal prosecutor who was elected in November, will inherit what is likely to be a defining investigation of his tenure.

At the heart of the investigation is the question of whether Mr. Trump and his family business inflated the value of some of his hotels, golf clubs and office buildings to secure financing from potential lenders, people with knowledge of the matter have said. If Mr. Trump intentionally misled lenders about the value of his assets, he could face charges for scheming to defraud them.

This month, Mr. Vance’s office issued a new subpoena to Mr. Trump’s company, seeking information about the valuations, the people with knowledge of the matter said, a move that came after prosecutors questioned Mr. Trump’s accountant under oath.

The prosecutors have examined whether Mr. Trump and his deputies at the company provided false information about the value of properties to the accountant, who compiled the data into documents that the company, the Trump Organization, then shared with lenders.

The documents, known as annual statements of financial condition, reflect both the potential strength and the peril of pursuing a criminal case against Mr. Trump. Although wildly exaggerated property values could implicate Mr. Trump, the statements contain disclaimers indicating that the accountants never audited or authenticated the data, which could bolster his defense.

Complex white-collar prosecutions also often rely on damning emails or cooperating witnesses. But Mr. Trump does not use email, and his company’s chief financial officer, Allen H. Weisselberg, has resisted pressure to turn on his boss even after Mr. Vance’s office charged him with tax fraud earlier this year.

Mr. Trump has repeatedly lashed out at Mr. Vance for leading what the former president has derided as a partisan witch hunt.

A spokesman for Mr. Bragg, a Democrat, declined to comment on the investigation other than to say that the incoming district attorney had not been briefed on it. Mr. Bragg expects to be briefed soon after being sworn in.

The investigation, which has unfolded in fits and starts over more than three years, ran into significant delays as Mr. Trump threw up a series of legal roadblocks.

In 2019, while he was still president, Mr. Trump sued to block a subpoena from Mr. Vance for eight years of his personal and corporate tax returns, touching off a bitter legal battle that reached the United States Supreme Court twice.

The court sided with Mr. Vance both times. But the Trump Organization continued to resist other subpoenas, refusing to turn over certain documents and spurring another dispute that was up to a state judge in Manhattan to resolve.

The judge recently took steps to resolve the dispute, a person with knowledge of the matter said, but the outcome could not be determined.

Although top officials in Mr. Vance’s office are set to depart on Jan 1., the Trump investigation is expected to remain on the track it has been following. Mr. Bragg plans to retain the leaders of the investigative team that has been working on the inquiry, including Mark F. Pomerantz, an experienced former federal prosecutor and white-collar defense lawyer, and Carey Dunne, Mr. Vance’s general counsel.

Lawyers in the office of New York’s attorney general, Letitia James, joined the inquiry in the spring.

Both Mr. Bragg and Ms. James, a Democrat, have run for office while highlighting their aggressive stances toward the former president, making statements that Mr. Trump is likely to claim are evidence of what he says is political bias.

Ms. James, who had announced that she was running for governor, said this month that she would instead seek re-election as attorney general, citing “a number of important investigations and cases underway.” She is conducting a separate but parallel civil inquiry into the same business practices that are under scrutiny in the criminal case and is seeking to question Mr. Trump under oath next month.

Mr. Trump’s lawyers said they would ask a judge to block the questioning, and on Monday, they sued Ms. James, accusing her of violating the former president’s constitutional rights and seeking to have her investigation halted altogether. If Ms. James can proceed with her inquiry — and if she finds evidence of wrongdoing — she could sue Mr. Trump, his company or both. Unlike the district attorney, she does not have the authority to file criminal charges.

If Mr. Trump is criminally charged, his lawyers would most likely portray his lenders as sophisticated financial institutions that conducted their own assessments of his properties’ values without relying entirely on him. They may also emphasize that the lenders actually made money in their dealings with Mr. Trump and that property valuations are subject to wide interpretation.

In July, Mr. Vance’s prosecutors charged the Trump Organization and Mr. Weisselberg with orchestrating a 15-year scheme to evade taxes by giving off-the-books, luxury perks to senior executives. A trial in that case, which grew out of the broader investigation into Mr. Trump’s statements to lenders, is scheduled for late next summer, amid the 2022 midterm elections.

After charging Mr. Weisselberg in an unsuccessful attempt to win his cooperation, the prosecutors renewed their focus on potentially inflated valuations, particularly Mr. Trump’s statements to lenders. As part of that focus, the prosecutors interviewed Mr. Trump’s longtime accountant and his former top banker at Deutsche Bank, which has provided him with hundreds of millions of dollars in loans.

Mr. Bragg, 48, won a tough Democratic primary in June, campaigning on a message of fairness and public safety, and won the general election in November.

The first Black person to be elected Manhattan district attorney, he is seeking to reshape the office, to stop prosecuting a number of low-level crimes and to engage in more robust scrutiny of law enforcement, while also combating a surge in gun violence. While campaigning, he also made a point of mentioning that he had sued Mr. Trump more than 100 times when he worked in the state attorney general’s office.