U.S. and Russia Agree to Talks Amid Growing Tensions Over Ukraine 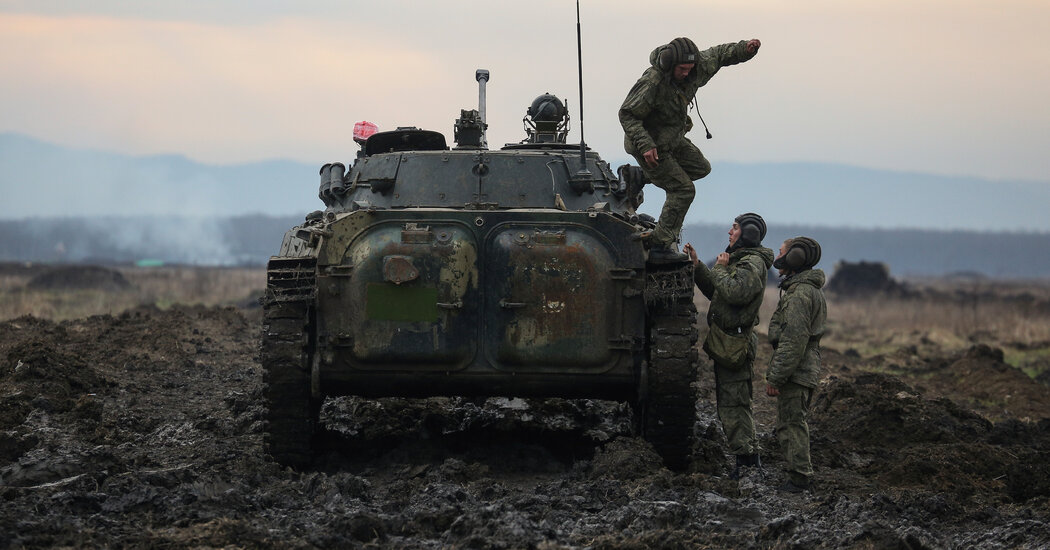 WASHINGTON — The Biden administration said on Tuesday that talks with Russia about tensions over Ukraine and a range of other issues would open on Jan. 10, in what American officials hope will mark a slow shift from a possible military confrontation on Ukraine’s eastern border to a resumption of diplomacy.

The announcement came shortly after Russia declared that 10,000 combat and special forces troops conducting exercises were returning to their barracks. But that move took place at some distance from Ukraine, and it was not clear whether the decision was part of the intense behind-the-scenes discussions underway to get Russia to pull back tens of thousands of troops at the border before serious diplomacy begins.

Jake Sullivan, President Biden’s national security adviser, said last week at the Council on Foreign Relations that “meaningful progress at the negotiating table, of course, will have to take place in the context of de-escalation, not escalation.”

But the threat of a possible invasion of Ukraine is critical leverage for Moscow, and Russian officials say the Jan. 10 talks need to focus on their proposed “treaty” that demands that NATO never offer membership to Ukraine or place its forces or weapons in former Soviet states.

Some of those states are already NATO members.

In a statement, the National Security Council did not say where the meeting would take place, but the most likely site is Geneva, where previous rounds of talks about nuclear weapons have been held. Nor did it say who would lead the delegation. The nuclear talks have been led by the deputy secretary of state, Wendy Sherman, and her Russian equivalent, Sergei Ryabkov.

The National Security Council said that Mr. Biden’s “approach on Ukraine has been clear and consistent: Unite the alliance behind two tracks, deterrence and diplomacy.”

The deterrence side of the equation has included arming the Ukrainians with Javelin anti-tank missiles and other weapons. It has also involved getting European and other allies to agree in advance on a series of economic sanctions if Russia sends its troops across the border to seize parts of Ukraine beyond Crimea, which it annexed in 2014.

American diplomats are struggling to understand whether the diplomatic initiative that would begin next month is a serious effort by Russia to push NATO forces away from its border and end military aid to Ukraine, or a feint intended to provide justification for military action. Intelligence officials say they believe President Vladimir V. Putin of Russia has not decided whether to invade Ukraine, but they worry that he might be reluctant to appear as though he is backing down if he begins to pull the forces back in large numbers.

Mr. Putin’s ultimate goal, many American officials speculate, is to destabilize Ukraine’s government and put in place a leader who will not turn to the West for support. That strategy has worked in Belarus, whose president, Aleksandr G. Lukashenko, has grown closer to Mr. Putin and pledged to participate in a growing number of joint military exercises.

Mr. Putin made clear in an interview broadcast on Sunday that he had no intention of taking his military options off the table. He has dismissed Mr. Biden’s vow that the sanctions under consideration would be far more severe than any the United States and its allies have ever imposed against Russia.

Mr. Putin said he would consider “diverse” options if the West declined to meet his demands. “It will depend on what proposals our military experts submit to me,” he said.

But Mr. Putin has options that do not involve troop movements, including using cyberweapons to cut off part of the electric grid in Ukraine, which is connected to Russia’s grid. Two such attacks, in 2015 and 2016, paralyzed parts of Ukraine, as did the NotPetya attack in 2017 that shut down banks, shops and media organizations. It is considered one of the most expensive cyberattacks in modern history.