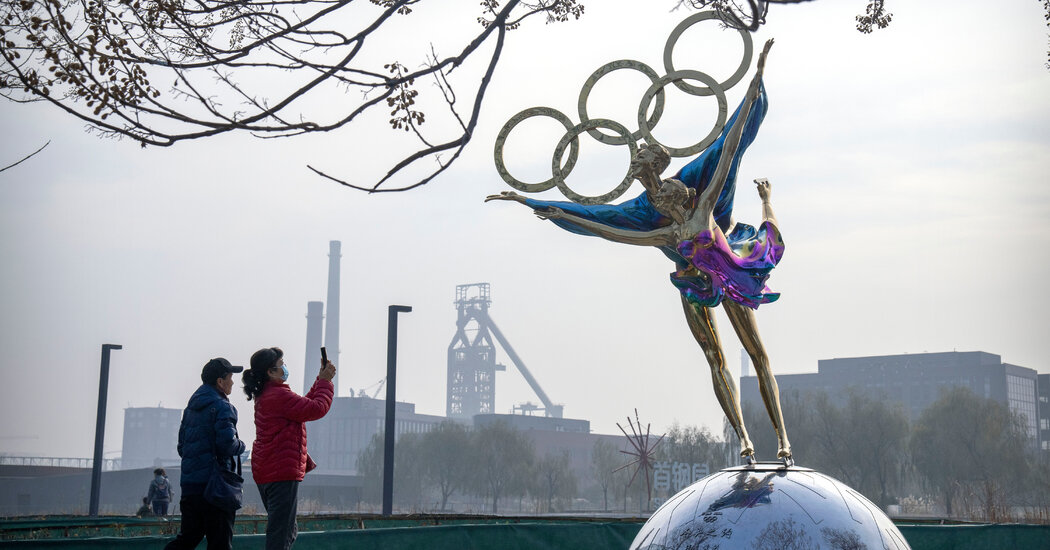 WASHINGTON — President Biden said on Thursday that the United States was considering a diplomatic boycott of the 2022 Winter Olympics in Beijing, as pressure grows to hold China accountable for human rights abuses.

A boycott would mean that government officials would not attend the Games, which are slated to begin in February, though it would not prevent U.S. athletes from competing.

As he met with Prime Minister Justin Trudeau of Canada at the White House, Mr. Biden responded to a reporter’s question about the potential for a diplomatic boycott by saying it was “something we are considering.”

The comment came days after a virtual meeting between Mr. Biden and China’s leader, Xi Jinping, that was meant to prevent increasing tensions from turning into a broader conflict. While Mr. Xi warned the administration against supporting Taiwan, Mr. Biden raised concerns about abuses in the Xinjiang region, Tibet and Hong Kong, according to a White House statement.

Abuses against the Uyghur community, as well as a crackdown on free speech in Hong Kong, have prompted calls from about 180 human rights organizations and members of Congress to use the Olympics as an opportunity to hold China accountable. But while some see a diplomatic boycott as a way to send a message without punishing U.S. athletes, others questioned the effectiveness of withholding a government delegation when public attention is on the athletic competition.

“Whether we want it or not, the Olympics in Beijing are going to happen,” said Frédéric Mégret, a co-director of the Centre for Human Rights and Legal Pluralism at McGill University and an international human rights lawyer. “The question is: Do you want to give the Chinese government photo ops?”

Bipartisan support for a boycott of some kind has steadily increased. Speaker Nancy Pelosi of California this year called for the president to withhold a U.S. delegation from attending, although she has said that athletes should be able to compete. Senator Tom Cotton, Republican of Arkansas, called on Thursday for a total boycott of the Beijing Games.

Secretary of State Antony J. Blinken told The New York Times last week that the United States was discussing with allies “how they’re thinking about participation” in the Olympics. “It’s an active conversation,” he said. Governments in Canada and Europe have also faced pressure to boycott the Games.

The U.S. Olympic and Paralympic Committee, which would need to sign off on any full boycott, has made clear that it does not support a boycott that would prevent American athletes from competing in Beijing.

“They have been shown to negatively impact athletes while not effectively addressing global issues,” Kate Hartman, a spokeswoman for the committee, said of boycotts. “We believe that the more effective course of action is for the governments of the world and China to engage directly on human rights and geopolitical issues.” She did not respond to a follow-up question on what form of engagement the committee would prefer.

Mr. Biden and Mr. Xi did not discuss the Beijing Olympics when they met on Monday, Jen Psaki, the White House press secretary, said on Thursday.

But she acknowledged that “we do have concern,” noting the human rights abuses. Ms. Psaki did not respond to an email asking whether the president had made a decision about the Games.

The last time the United States fully boycotted the Olympics was in 1980, when President Jimmy Carter rallied against allowing athletes to participate in the Summer Games in Moscow to protest the Soviet Union’s military presence in Afghanistan. The move is widely regarded as producing few tangible results while providing Russia with ample talking points.

Senator Mitt Romney, Republican of Utah, echoed that sentiment this year. The senator, who ran the committee that organized the 2002 Salt Lake City Games, wrote a New York Times Op-Ed calling for an economic and diplomatic boycott of the 2022 Olympics rather than preventing athletes from competing.

Limiting a boycott to government officials can be a way to send a message to the leaders of the host country while also allowing athletes to compete and protest oppression on the global stage, historians said.

After Russia passed anti-L.G.B.T.Q. legislation in 2013, President Barack Obama included three gay athletes in a U.S. delegation to the Winter Olympics in Sochi.

One of the more famous scenes in Olympic history was in 1968, when the sprinters John Carlos and Tommie Smith raised their fists in a symbol of Black power.

“Regimes have a history of treating their hosts of the Olympics with an international seal of approval for whatever they’re doing,” said John Soares, a history professor at Notre Dame who has written about the Olympics. “Critics of a regime’s human rights record or other aspects of their policy say you don’t want to supply that seal of approval.”