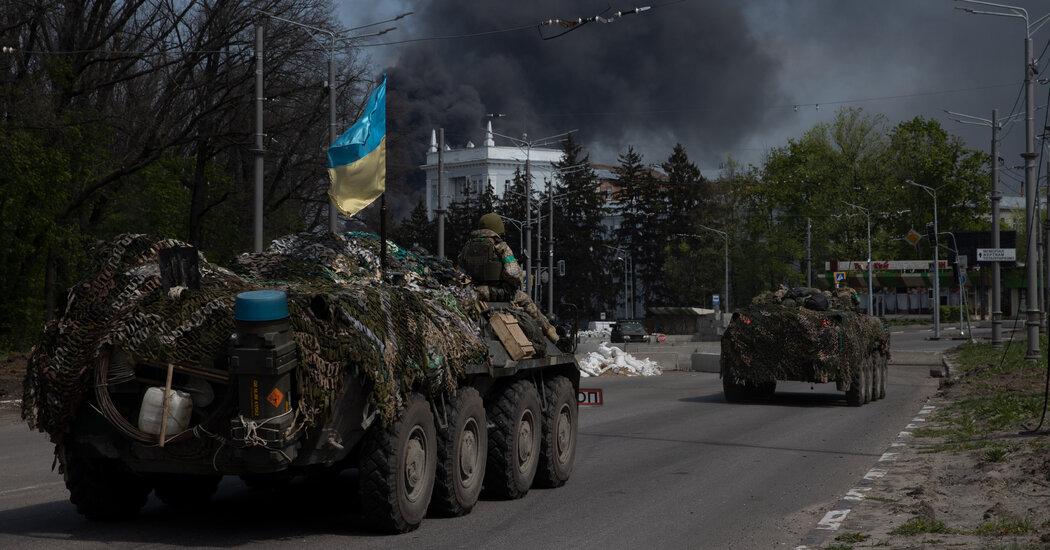 MARINA DI CARRARA, Italy— The Italian police are in a race to finish investigating the ownership of a $700 million superyacht, which U.S. officials say is linked to President Vladimir V. Putin of Russia, before the vessel is put to sea and able to elude possible sanctions.

They may be running out of time.

After spending months dry-docked in the Tuscan port of Marina di Carrara, the 459-foot vessel, called the Scheherazade, was put into the water again on Tuesday. Crew members milled about topside as water slowly filled the dry dock. The British captain, who had previously spoken to reporters, did not respond to questions.

A former crew member said that the ship could be ready to sail immediately, but that first it was likely to undergo sea trials to check its equipment — common for a ship that has been under repair and, in this case, in port since September.

The Scheherazade has so far avoided the fate of some luxury yachts linked to powerful Russians, which have been seized in the effort by the European Union, Britain and the United States to go after the wealth of oligarchs and officials in Mr. Putin’s inner circle in response to the Ukraine invasion. In March, the Scheherazade’s captain, Guy Bennett-Pearce, said the vessel’s owner — whom he didn’t identify — was not on any sanctions list. The Italian media reported that the owner was Eduard Khudainatov, an oil tycoon not currently under sanctions. He is a longtime associate of Igor Sechin, a close Putin ally and chairman of the Russian state-owned oil company Rosneft, who is believed to be the owner of a superyacht seized in March.

Mr. Khudainatov’s ownership of the Scheherazade could not be independently verified. If indeed he is the owner, it may be only on paper. His name has also come up in the case of another superyacht, The Associated Press earlier reported: the Amadea, which shares an exterior designer, interior designer and builder with the Scheherazade. On Tuesday, Fiji’s highest court gave the United States permission to seize the $325 million Amadea, which has been held in the South Pacific nation since last month. According to an American official, the vessel’s owner is Suleiman A. Kerimov, a billionaire gold magnate from Russia who has been under U.S. sanctions since 2018; defense lawyers claim the true owner is Mr. Khudainatov, The Associated Press reported.

The former Scheherazade crew member, who spoke on the condition of anonymity because of a nondisclosure agreement that workers on the ship signed, had never heard of Mr. Khudainatov and said it was openly discussed onboard that the Scheherazade’s real owner was Mr. Putin. Soon after The Times first wrote about the Scheherazade in early March, U.S. officials said the yacht had ties to Mr. Putin, without offering specifics. A team of journalists working for the jailed Russian opposition leader Alexei Navalny obtained a list of crew members and found that many of them were employees of the Russian agency that guards Mr. Putin.

A spokeswoman for Italy’s financial police, which has been leading the national and international inquiry into the Scheherazade’s ownership, said that, should the vessel leave before their investigation concluded, there would be nothing that authorities could do to stop it.

Three port workers said that the authorities appeared to be keeping an eye on the yacht, which has been adjacent to a police station and the Coast Guard while in dry dock; a police helicopter makes daily fly-bys, they said. The workers, who were not authorized to speak to the press, asked that their names not be disclosed.

A retired shipyard employee, Roberto Franchi, said that if the Scheherazade “is floating, it can move relatively quickly.”

It isn’t clear where the ship would go, but the movements of Russian-owned superyachts that have successfully dodged American, European Union or British sanctions offer some possibilities. Two vessels that belong to the billionaire Roman Abramovich, who faces British and E.U. sanctions, have been in Turkish waters for weeks. Others have loitered in the Maldives, an island nation in the Indian Ocean. The Nord, owned by the sanctioned billionaire Alexei Mordashov, went much farther afield, arriving at the Russian Pacific port of Vladivostok at the end of March, according to data from Marine Traffic, which tracks vessels.

Those superyachts escaped the fate of the Amadea and a growing list of others, including Sailing Yacht A, owned by the billionaire Andrey Melnichenko and impounded by the Italian police in March; and the Crescent, sister ship of the Scheherazade, impounded in Spain. Reuters, citing a person in the Spanish police, reported that the Crescent was believed to belong to Mr. Sechin.

Here in Marina di Carrara, port workers and other people with access to the shipyard saw a flurry of activity by the Scheherazade’s crew: removing the white plastic screens that protected the decks during the repairs, cleaning the ship, loading supplies. Last week, they said, fuel trucks filled the vessel’s enormous tanks, while crew members carefully moved wrapped cases onboard.

As the sun set on Tuesday, a young couple had their aperitivo drinks at a bar overlooking the shipyard.

“Look, Putin’s yacht is still here,” Massimo Giovi, a 25-year old student, joked. “If that goes, it will change the skyline here.”