Unable to Agree on Russia Sanctions Bill, Senate Settles for a Statement 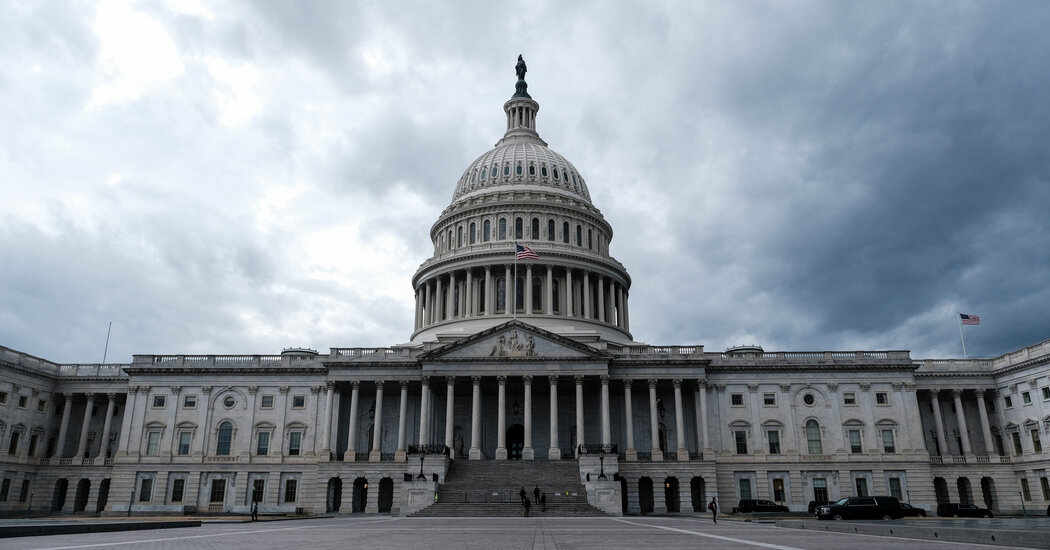 WASHINGTON — For weeks, as President Vladimir V. Putin of Russia signaled he was moving closer to invading Ukraine, members of Congress in both political parties vowed that the Senate would pass a “mother of all sanctions” bill targeting Moscow that would prove the overwhelming, bipartisan American resolve to stand with Kyiv against Russian aggression.

But on Thursday evening, with the threat of invasion looming ever more acutely, senators could muster only the legislative equivalent of a strongly worded letter scolding Mr. Putin for a “provocative and reckless” military buildup on Ukraine’s border, passing a nonbinding resolution quickly and without debate before leaving Washington for a weeklong break.

Some senators praised the symbolic action, taken with a voice vote, as proof that the Senate could unite to deliver a strong message of support at a perilous moment.

But it was a striking backtracking, born of deep disagreements between the two parties over when and how to impose sanctions on top Russian officials and banks, and resistance by the Biden administration to acting before Mr. Putin invaded. The result was legislative paralysis on a measure that — at least conceptually — seemed to have enjoyed overwhelming support. Few senators had even questioned whether approving additional sanctions on Moscow would act as a deterrent against further incursions by Russia into Ukraine.

“Both parties are saying the same thing about wanting the same result,” said Senator Jim Risch of Idaho, the top Republican on the Foreign Relations Committee, who had been negotiating the bill on behalf of his party. “It’s just, what action gets us that result?”

Republicans and Democrats squabbled about that question for weeks. In January, Democrats scuttled an effort by Senator Ted Cruz, Republican of Texas, to impose sanctions on Nord Stream 2, the Russian gas pipeline, arguing that imposing such measures before an invasion would give up key leverage that United States officials needed in diplomatic talks with Russia. Pressing a case made by the White House, they also said it would alienate Germany when demonstrating European unity against Moscow’s aggression was crucial. They all but promised they would coalesce around a new sanctions bill.

The measure under discussion in recent weeks by Mr. Risch and Senator Bob Menendez, the New Jersey Democrat who is the chairman of the Foreign Relations Committee, was supposed to be what they called the “mother of all sanctions” packages. It would have slapped immediate penalties on Russian officials and entities, and additional ones should Mr. Putin invade.

The bill also would have authorized President Biden to use the Lend-Lease Act of 1941 to lend military equipment to Ukraine, on top of the $2.7 billion in security assistance the United States has committed to Kyiv since 2014.

For weeks, senators used language such as “fine-tuning” and “one-yard line” to describe how close they were to reaching a deal. Mr. Menendez suggested that senators might even plow over objections from the White House to imposing sanctions before an invasion, a move that Republicans had pushed for but the Biden administration had lobbied hard to head off.

“They’re not enthralled with the idea,” Mr. Menendez told reporters about the White House. “But I have suggested to them that a strong bipartisan response strengthens their hand.”

But in the end, according to aides familiar with the negotiations, the intractable disagreements that doomed Mr. Cruz’s legislation also snarled the bipartisan negotiations. Democrats balked at imposing such broad sanctions before an invasion, amid fierce resistance from the Treasury Department, and Republicans insisted on doing so.

As the talks wore on with no resolution, prominent backers of a sanctions package — including Senator Mitch McConnell, Republican of Kentucky and the minority leader — began to argue that Mr. Biden could unilaterally impose sanctions without congressional action.

By Tuesday, eyeing the coming recess and the decaying state of negotiations, Senate Republicans unveiled their own sanctions legislation that also would have provided the Ukrainian government with an additional $500 million in military financing.

Mr. Menendez denounced the move as “partisan posturing,” and said the proposal was “largely a reflection of what Democrats had already agreed to.”

“A partisan victory is not worth a message of division from Washington, which only benefits Putin,” he said.

Despite the partisan bickering over how best to proceed, there has been little division in the Senate over whether additional sanctions could change Mr. Putin’s behavior.

Even Senator Josh Hawley, Republican of Missouri, who has argued that allowing Ukraine to join NATO would strain the security posture of the United States at a time when it should be focused on China, endorsed imposing additional sanctions.

“If they get to a point where their financial system is seriously impaired, I think that that will absolutely send a message,” Mr. Hawley said in a brief interview. “In the new era we’re entering in Europe, we’re going to have to do more with less.”

Only Senators Rand Paul, Republican of Kentucky, who has long opposed the use of sanctions, and Bernie Sanders, independent of Vermont, have publicly opposed the proposed bill.

“The sanctions against Russia that would be imposed as a consequence of its actions and Russia’s threatened response to those sanctions could result in massive economic upheaval — with impacts on energy, banking, food and the day-to-day needs of ordinary people throughout the entire world,” Mr. Sanders said in a speech from the Senate floor on last week.

That argument has also been adopted by some progressives in the House.

A Russian incursion, however, would most likely only rally more support to impose sanctions, though both the House and Senate are slated on be out on recess until the last week of February. It would also eliminate the dispute over timing of the sanctions that appears to have hamstrung Senate negotiators: whether to impose sanctions before an invasion.

“I can tell you this,” Mr. Risch said. “If there’s an invasion, there is going to be a lot of support for this bill.”