Valieva Falls and Shcherbakova Rises in a Blur of Jumps, Tumbles and Tears 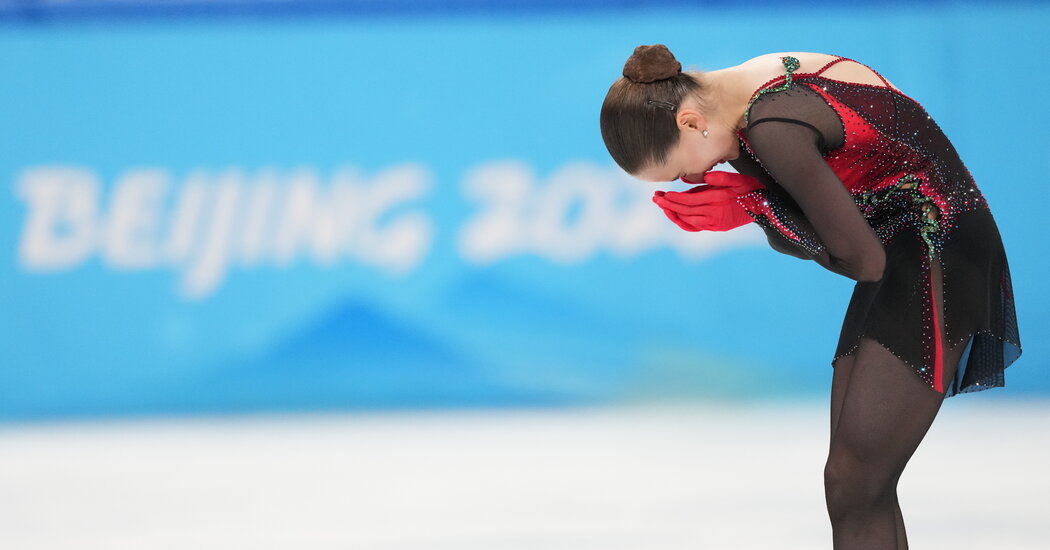 Although Valieva landed her first jump, a quad salchow, she fell on two other jumps, looking disoriented as she struggled to right herself. In a perplexing performance that shocked even herself, she had errors on nearly every single jump, including her normally high-soaring quadruple jumps that she usually lands with barely a sound.

The audience felt so sorry for her that it started encouraging her with cheers. Her coaches, looking on from the side of the rink, did not join in. Tutberidze shook her head and, at one point, stared at the ceiling as her prodigy flailed on the ice.

After finishing their programs, Shcherbakova and Trusova both gave jubilant fist pumps. At the end of hers, Valieva slapped the air in frustration. For a prolonged moment, she skated around the ice with a look of disbelief as if trying to figure out what had just happened. She had come into the Olympics as the favorite to win — by far — and she had failed. Some fans began chanting, “Ka-mi-la!”

Once the final standings were decided, Shcherbakova celebrated in her sparkly burgundy dress and posed for photos with the Russian Olympic Committee flag behind her (Russia’s national flag and anthem are not allowed at the Games because of a sweeping doping scandal).

Valieva was nowhere to be found. It has been a rough week and a half.

In an interview after being cleared to compete in the individual event, Valieva told Russia’s Channel One, the state-run TV station, that she had not slept at all on Sunday night after spending seven hours in a hearing with arbitrators who were considering her participation.

“I’m happy but emotionally I’m tired, so this is tears of happiness, I think, mixed with a bit of sorrow,” she told Channel One. “But I’m surely happy to be at the Olympic Games and to try to represent our country, and I hope I will fully focus and demonstrate my results.”

With her doping case looming, focusing had proved impossible. It took years for her to get to this point, on the cusp of her life’s goal.